Beck has a scheme

Promote Palin at an event he says isn't political, on a day he says he didn't know was the MLK speech anniversary 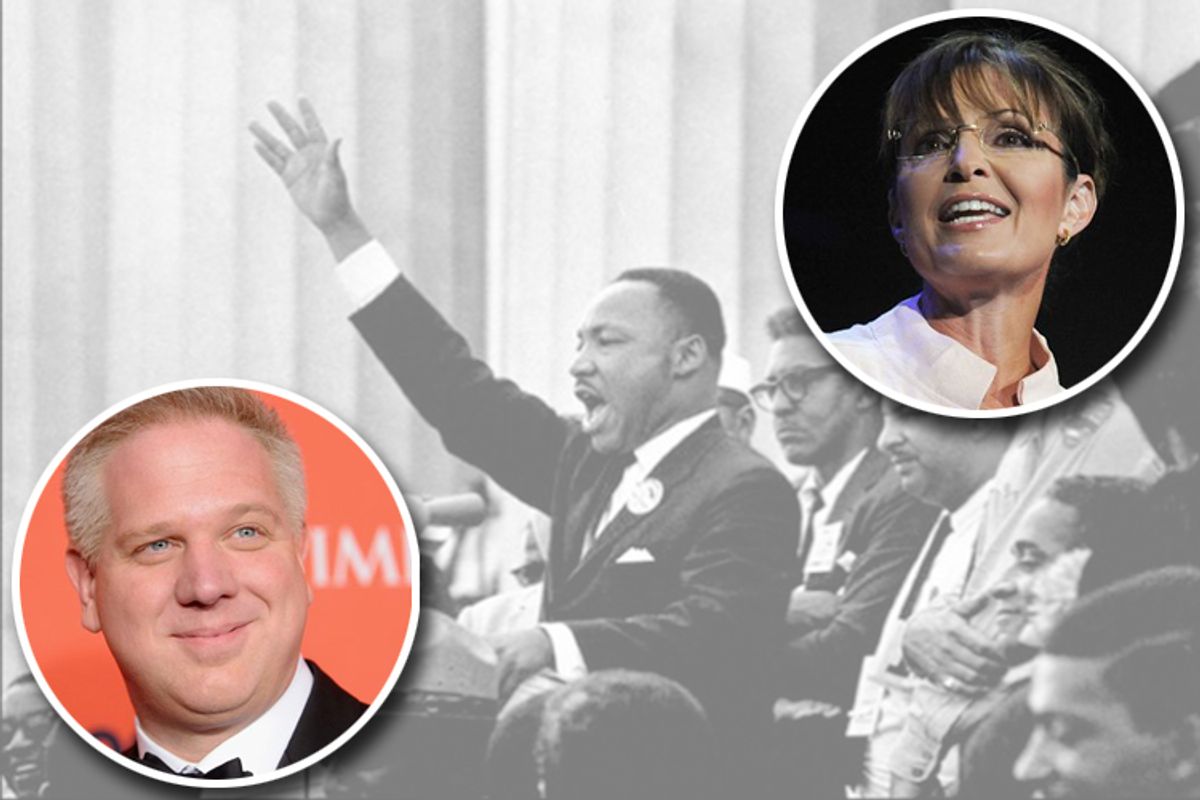 Glenn Beck is having a little Lincoln Memorial confab on Saturday, Aug. 28, the 47th anniversary of Dr. Martin Luther King Jr.'s historic "I have a dream" speech -- but he didn't know it was the King anniversary, he says. He's invited Sarah Palin to headline the event -- but the gathering isn't "political," he says.

You'd think as much as Beck prevaricates, he'd have gotten a little bit more convincing at it.

Beck, remember, was last seen deriding the Obama administration as "like the damn Planet of the Apes," which his defenders insisted had no racial subtext, yet Fox removed the reference from the show's transcript and video archive anyway. Last year, you'll recall, Beck called our first black president, who was raised by his white family, a "racist" with a "deep seated hatred of white people." News Corp. czar Rupert Murdoch was given many opportunities to separate himself from his star's remarks, and failed to.

So coincidence or not, it's galling to people who care about civil rights that grifters like Beck and Palin will desecrate the site of one of King's greatest speeches this weekend. I talked about the issue on MSNBC's "Hardball" today with the wonderful Melissa Harris-Lacewell, who managed to be more optimistic about our current political culture than I am. The video is below.

With help from his friends at corporate front groups Freedom Works and Americans for Prosperity, Beck is trying to pull together Tea Party malcontents for a big rally at the site that’s perhaps the most famous for King's words -- all while insisting it's not about politics. Anyone who doubts the political agenda of Beck and his buddies at Freedom Works, Americans for Prosperity and all the so-called grass-roots opposition groups sprouting in the Obama era must read Jane Mayer's devastating "Billionaires Against Obama" piece in this week's New Yorker. She lays out how the two scions of Koch Industries, whose coal, gas, lumber and other interests land them among the top 10 air polluters in the U.S., have funded an infrastructure of right-wing groups to oppose the Obama agenda and advocate for "drastically lower personal and corporate taxes, minimal social services for the needy, and much less oversight of industry -- especially environmental regulation." Their work will be on display Saturday -- at an event Beck pretends isn't political.

Beck claims he didn't know Aug. 28 was the anniversary of King's most famous speech when he chose the day, and I'm not sure what's worse -- that he's lying, or that he's telling the truth. My gut says he's full of crap: You don't schedule an event at the Lincoln Memorial, on the same day of one of the most famous events ever held there, and not know of the coincidence. Besides, Beck has been comparing himself to King, and his acolytes to civil rights strugglers, at least since the Obama administration began. He's too big a megalomaniac not to know the symbolism of his choice.

But let's say he's telling the truth: Can someone who purports to be knowledgeable about our political and social history really not know about the 1963 March on Washington? Was Beck even paying attention when Obama accepted the Democratic nomination in Denver just two years ago, and every news organization in the world noted it happened to be on the 45th anniversary of the King speech -- that's right, Aug. 28. It's hard to believe.

When the "coincidence" was called to his attention, Beck exhibited his trademark megalomania and paranoia. It was "divine providence," he said -- and besides, he snarled, "black people don't own Martin Luther King!" It seems a little tone-deaf to talk about "owning" someone when King was fighting to undo the legacy of slavery, when African-Americans were literally owned by white people. A final fun fact: Beck insists he only chose the date because that was the only open Saturday before 9/12, and of course he couldn't ask people to rally on a Sunday, "the Sabbath." Of course, Saturday is the Jewish Sabbath, but I guess Jews weren't high on the outreach list for Beck's big event. But that's our Beck, who has shown he subscribes to one of the ugliest anti-Semitic canards, that Jews bear the blame for killing Jesus.

We’re also supposed to believe that Beck's headliner for his "non-political" event is the craven opportunist Sarah Palin, who doesn't do a thing that's not political, unless she's paid a lot of money for it (she headlined some Vegas wine convention recently, go figure.) Aug. 28 is a big anniversary for Palin, too: It's the day before her coming out as John McCain's vice-presidential pick two years ago. Let freedom ring! Palin's a great choice for a King anniversary event: Her last brave civil rights stance was defending the right of Dr. Laura Schlessinger to use the N-word 11 times on her radio show, insulting a black woman who called for advice about how to deal with her white husband's close-minded family (closing by saying if the caller was "hypersensitive," then "maybe you shouldn't marry outside your race" -- a slap to white people, by the way, as if all of us would toss around the N-word to our black in-laws were they dumb enough to join our families!).

You'll recall that Palin tweeted her solidarity with Schlessinger the day after the radio bully announced her retirement:

"Dr.Laura:don't retreat...reload! (Steps aside bc her 1st Amend.rights ceased 2exist thx 2activists trying 2silence 'isn't American,not fair'')…Dr.Laura=even more powerful & effective w/out the shackles, so watch out Constitutional obstructionists. And b thankful 4 her voice,America!"

But my friend Melissa Harris-Lacewell cautioned me and Chris Matthews against giving Beck and Palin too much credit for winning people over to their crazy racial views. She's right: It's increasingly clear that the Tea Parties and Palin power are just more exciting names for an old political phenomenon: the aging, white, anti-government Republican base. They have more acolytes than I wish they did but fewer than they'll need to transform the country, especially if Democrats remember what they're fighting for in November. Harris-Lacewell also compared King's incomparable words to the word salad normally tossed by Palin, and that made me laugh. Put the "I Have a Dream" speech side by side with whatever Palin says Saturday, and you'll create instant civil rights believers among whoever reads through both. I promise we'll do that here on Saturday.

This story has been corrected since publication.