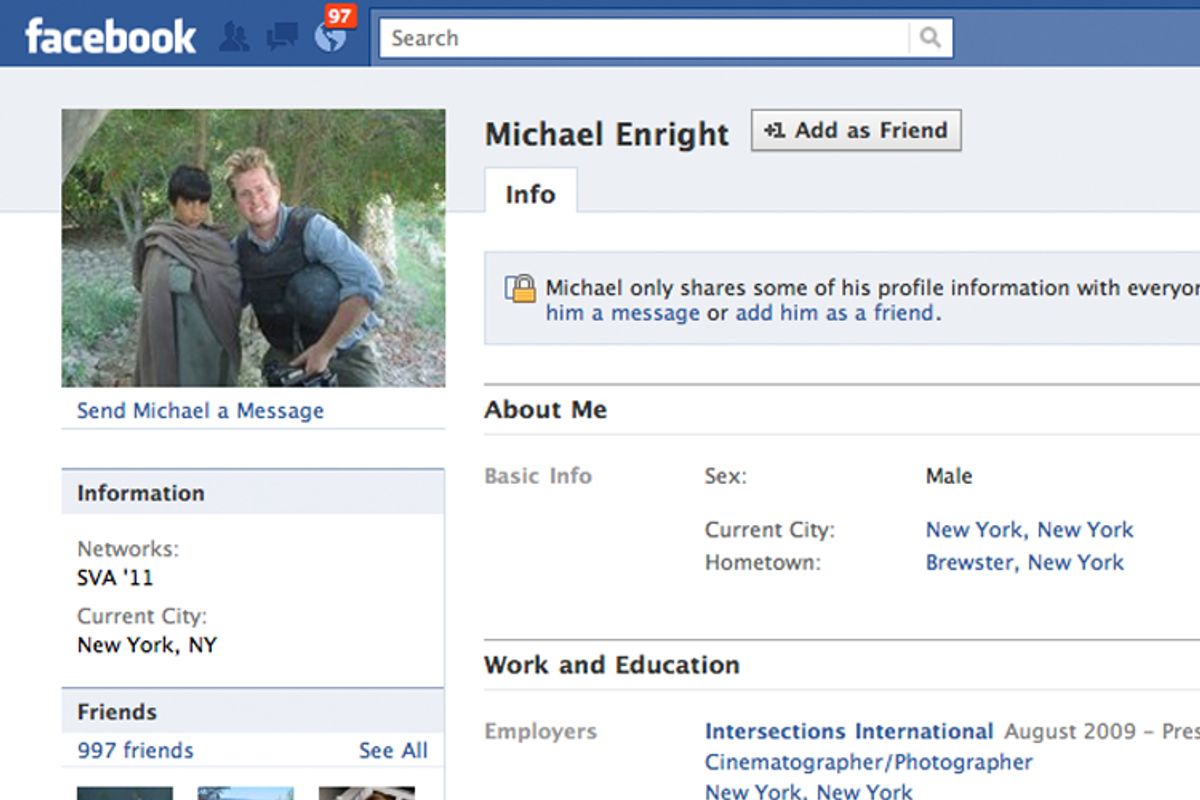 [Updated] The man who allegedly stabbed a cab driver after learning that the driver was a Muslim is Michael Enright, a 21-year-old filmmaker from upstate New York. Enright -- who shoots video for a New York-based peace group that counts Cordoba Initiative as one of its partners -- has been charged with attempted murder as a hate crime, and police say he was "very, very intoxicated" when he got in the cab at 6 p.m. last night.

At one point, Enright said, "Al salaam aalaykum" -- the Arabic greeting meaning, "Peace upon you."

[Driver Sharif] Ahmed replied, "Wa alaikum salaam" -- meaning, "And on you be peace!"

As the cab neared east 41st Street, about a block away from Enright's destination at 42nd Street and Third Avenue, he barked, "This is the checkpoint motherf---er. I have to f--- you up this time."

While earlier reports claim the driver "locked" Enright in the back seat, the Post says Enright ran off and was pursued by the driver, who flagged down a patrol cop.

The Post initially described Enright as an active-duty soldier, but they have updated the story (without a correction) to indicate that Enright told police he "works for an Internet media company" that had been in Afghanistan filming a combat unit "until this past May."

According to this press release, "Enright is attracting national attention as he documents the service of his high school buddy from training through deployment in a combat zone with Bravo Company of the 1st Battalion, 3rd Marines, based out of Hawaii and known as the 'Lava Dogs.'"

And here is some of Enright's work. This is a veteran-civilian dialogue Enright filmed in March:

And this is a trailer for Enright's film, "Home of the Brave":

The driver is in stable condition, and Enright will be arraigned later today.

This bizarre crime happened well before either New York tabloid went to press, but neither seems to have covered it in their print editions, despite their boundless love for both bizarre crimes and anything that could be construed as relating to the Park51 project.

Update: Ahmed H. Sharif, the driver slashed by Enright, has released a statement via the New York Taxi Workers Alliance. Sharif, who says he feels "hopeless and insecure," says Enright was friendly and chatty until suddenly going silent and then cursing and screaming.

Ahmed H. Sharif, 43, a yellow taxi cab driver slashed across the neck, face and shoulders by a passenger during an anti-Muslim hate crime will stand with fellow New York Taxi Workers Alliance members, and community, immigrant and Muslim organizations to call for an end to the bigotry and anti-Islamic rhetoric in the debate around the Park 51 Islamic Cultural Center, referred to as the Ground Zero Mosque. "I feel very sad. I have been here more than 25 years. I have been driving a taxi more than 15 years. All my four kids were born here. I never feel this hopeless and insecure before," said Mr. Sharif. "Right now, the public sentiment is very serious (because of the Ground Zero Mosque debate.) All drivers should be more careful."

On Tuesday, August 24th, 2010 Mr. Sharif picked up the perpetrator at 24th Street and Second Avenue, his first fare for the shift, and headed toward Times Square. The man, 21, started out friendly, asking Mr. Sharif about where he was from, how long he had been in America, if he was Muslim and if he was observing fast during Ramadan. He then first became silent for a few minutes and then suddenly started cursing and screaming. There, at about 6:15pm at Third Avenue between 40th and 41st Streets, he yelled, "Assalamu Alaikum. Consider this a checkpoint," and then slashed Mr. Sharif across the neck. As Mr. Sharif went to knock the knife out, the perpetrator, continuing to scream loudly, cut the taxi driver in the face (from nose to upper lip), arm and hand.

"While a minority of has-been politicians spew ignorance and fear, it's the working person on the street who has to face the consequences," said NYTWA Executive Director Bhairavi Desai. "This kind of bigotry only breeds more violence and makes taxi drivers all the more vulnerable on the streets where there are no bully pulpits or podiums to hide behind." The US Department of Labor reports taxi drivers to be thirty times more likely to be killed on the job than other workers.

The 13,000-member NYTWA called on the District Attorney to be vigilant in its prosecution of the attempted murder and hate crime and urged the Governor to sign the Taxi Driver Protection Act, passed by the state legislature on June 26th, 2010, increasing penalties on crimes against taxi drivers and requiring a sign in all taxis, "WARNING: Assaulting a Taxi Driver is Punishable by Up to Twenty-Five Years in Prison." "Maybe if the warning sign was there, this kind of stranger who comes to us with hatred would have to think twice," said Anwar Hossain. "At least we could feel safer and not alone. No matter what political issue is going on, at least we could be treated as equal Americans and feel protected."