"Were You Born on the Wrong Continent?": America's misguided culture of overwork

Germany's workers have higher productivity, shorter hours and greater quality of life. How did we get it so wrong? 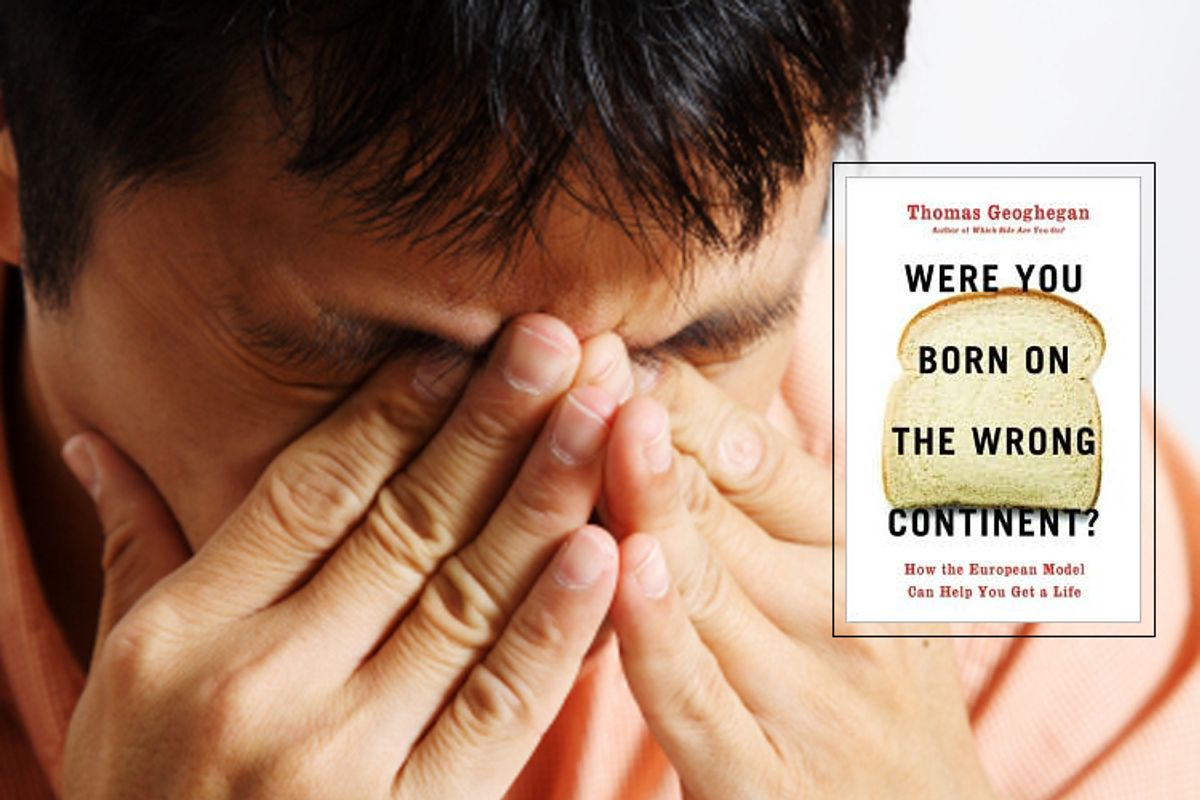 Since the start of the recession, the number of unemployed in the U.S. has doubled. Those who are fortunate enough to still have jobs are often working longer hours for less pay, with the ever-present threat of losing being laid off. But even before the recession, American workers were already clocking in the most hours in the West. Compared to our German cousins across the pond, we work 1,804 hours versus their 1,436 hours – the equivalent of nine extra 40-hour workweeks per year. The Protestant work ethic may have begun in Germany, but it has since evolved to become the American way of life.

According to Thomas Geoghegan, a labor lawyer in Chicago and author of "Were You Born on the Wrong Continent?: How the European Model Can Help You Get a Life," European social democracy – particularly Germany’s – offers some tantalizing solutions to our overworked age. In comparison to the U.S., the Germans live in a socialist idyll. They have six weeks of federally mandated vacation, free university tuition, nursing care, and childcare. In an attempt to make Germany more like the U.S., Angela Merkel has proposed deregulation and tax cuts only to be met with fury on the left. Over multiple trips spanning a decade, Geoghegan decided to investigate how the Germans were living so well, and by extension, what we might be able to learn from them.

Salon spoke to Geoghegan over the phone about Germany's luxurious worker benefits, our own dysfunctional attitudes towards work, and how we can make our lives more like theirs.

People in the U.S. often pride themselves for working more than our European counterparts. Why do we work so much in the first place?

There aren’t any historical or cultural reasons for it. Americans famously had more leisure time than the Japanese back in the 1960s. I would say if you did a survey of most people who are in their late 50s or 60s, they will tell you that they take fewer vacations than their parents did. Now why did that change? It wasn’t because of the Pilgrims. People work hard in America, but there was a period where leisure time was increasing. I quoted Linda Bell and Richard Freeman in an article they wrote about what happened during the ‘90s. There was nobody to stop you from working longer. There was no government check, there was no union check as there is on excessive work as there is in Germany or elsewhere in Europe. These institutional checks are gone. So people feel like lab rats: "If I work an extra 10 minutes over the person in the cubicle next to me, then I’m less likely to get laid off." It’s a very rational response.

Aren’t we at least more productive by virtue of the amount of time we’re putting in?

No. Look at their productivity rates. They’re like ours. I think we understate our hours and they overstate them, because they take so much time off and sneak off early from work. If the productivity rates being reported are officially the same, and if they’re understating and we’re overstating, they’re probably working more efficiently than we are, and maybe the fact that they’re taking time off has something to do with that.

Why is it useful to compare ourselves to the Germans?

Germany has the highest degree of worker control on the planet since the collapse of the Soviet Union. When I saw German labor minister Günther Horzetzky in April of 2009, he said "Our biggest export now is co-determination." He meant that other European countries were coming up with versions of it.

How did Germany become such a great place to work in the first place?

The Allies did it. This whole European model came, to some extent, from the New Deal. Our real history and tradition is what we created in Europe. Occupying Germany after WWII, the 1945 European constitutions, the UN Charter of Human Rights all came from Eleanor Roosevelt and the New Dealers. All of it got worked into the constitutions of Europe and helped shape their social democracies. It came from us. The papal encyclicals on labor, it came from the Americans.

But the Germans have a lower GDP than we do. Doesn’t that mean that our quality of life is better?

One day we’ll get beyond that and see that the European standard of living is rising. You can pull out these GDP per capita statistics and say that people in Mississippi are vastly wealthier than people in Frankfurt and Hamburg. That can’t be true. Just spend two months in Hamburg and spend two months in Tupelo, Mississippi. There’s something wrong if the statistics are telling you that the people in Tupelo are three times wealthier than the people in Germany. Despite the numbers, social democracy really does work and delivers the goods and it’s the only model that an advanced country can do to be competitive in this world. I mean that not just in terms of exports, but in terms of being green at the same time. That we can raise the standard of living without boiling the planet shows how our measure of GDP is so crude.

What are we missing when we measure the GDP?

We don’t have any material value of leisure time, which is extremely valuable to people. We don’t have any way of valuing what these European public goods are really worth. You know, it’s 50,000 dollars for tuition at NYU and it’s zero at Humboldt University in Berlin. So NYU adds catastrophic amounts of GDP per capita and Humboldt adds nothing. Between you and me, I’d rather go to school at Humboldt.

So much of the American economy is based on GDP that comes from waste, environmental pillage, urban sprawl, bad planning, people going farther and farther with no land use planning whatsoever and leading more miserable lives. That GDP is thrown on top of all the GDP that comes from gambling and fraud of one kind or another. It’s a more straightforward description of what Kenneth Rogoff and the Economist would call the financialization of the American economy. That transformation is a big part of the American economic model as it has morphed in some very perverse directions in the last 30 or 40 years. It’s why the collapse here is going to take a much more serious long-term toll in this country than in the decades ahead.

Who is better off in a social democracy like Germany?

Social democracy is good for the middle class even more than it is for the poor. We’ve got it completely backwards here. It’s the relatively educated and well-to-do that do well on European socialism. What’s the cash value of Humboldt education to people who are high school grads? Zero. For the German upper middle class, it’s worth 50,000 a year. That’s the difference. You have to remember, even if there’s universal healthcare, the more educated people always use the system better than the less educated people. They know how to make it work for them.

By some measures though, it's good for everybody. America has this wonderful freedom and openness and this ability to create yourself out of nothing. We’re just much more individualistic a country. I think we have overdosed a little bit on that, but I share that. I’m an America and I’m glad I was born in the U.S. and I always will be. But in terms of receiving the benefits of economic growth and both in terms of enjoying life and enjoying the richness of life in a developed country both in terms of private goods and public goods, quality of life that comes from that and leisure, I think Germany has an enormous amount to teach us.

Can we adopt this German working life in the U.S.? Is it even feasible?

We do things that are more socialist than Europe does, but we don’t call it that. We have some things left over from the New Deal that a lot of European social democracies aren’t even close to, like time-and-a-half for overtime and social security. The single biggest single-payer socialist medical system in the world is in the United States: Medicare. Untouchable. Defended by Republicans. But it’s more socialist than the German health care system. The problem with it is that it coexists with several other systems that are not socialist at all and just pay scandalous windfalls to private vendors.

The whole system is just grossly inefficient. All of those European countries have one system. There’s cost control. There’s no cost control here; there are four or five systems competing simultaneously. To get cost controls, we’re going to have to have one system of payments for everybody. Now either we go to a free market system or a German insurance system or a single payer system. Although I don’t understand how it could happen at the moment, I just see no alternative in the long run except that the U.S. goes single payer across the board. Not because I believe in single payer over these other systems but just because of the facts on the ground. You’ve got to have one system and we aren’t going to trash Medicare. That will never happen.

Thomas Friedman’s "flat world" theory predicts that in the future, all countries will be competing on an equal playing field -- paving the way for highly-populated countries to dominate the world economy. Do you agree with him?

How does he explain the existence of Germany? What country has the highest exports in the world today? It’s the country with the highest wage rates and union restrictions. Germany has become more of a power, not less of a power as the world has become more global. Our problem isn’t competing with China, it’s competing with Germany in China. We’re so focused on China all the time, and low-wage assembly stuff, that we’re missing what’s going on. It’s Germany that’s going in and selling stuff in China that we ought to be selling that would hold down the trade gap between the U.S. and China. It’s not China’s fault; it’s Germany’s. But no one wants to talk about that. Because that would raise questions about the whole U.S. model: Why is this high-wage country beating us? Why are the European socialists beating us? It’s too subversive an idea so we don’t allow in the discourse.