After Katrina, I took offense when people said they hoped some folks wouldn't return. Now, I've become one of them 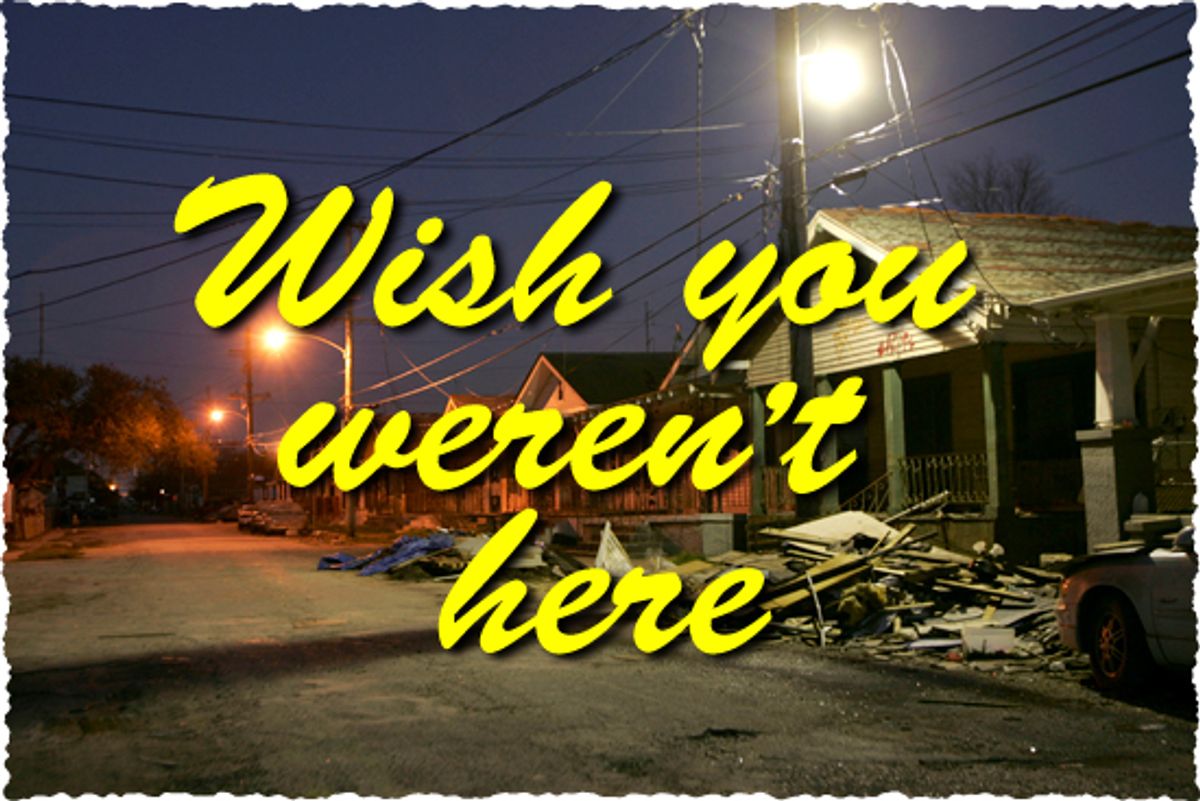 Last October, while running an errand, I made the mistake of thinking that I could walk four blocks on a sunny Saturday afternoon in New Orleans. I was in my old Bywater neighborhood and inevitably found myself stalled by spontaneous conversation with my former neighbors; this camaraderie is what I missed about the neighborhood, but it was also why I should have driven. I didn't have time for it, and in the years since Katrina I felt burned by what I now felt was a false front that we were all in this together.

My neighbors and I parted ways, and within half a block everything changed. I saw a group of kids on bikes ahead of me and turned to avoid what looked like trouble. Two stray dogs came charging toward me, but I was too slow to realize it was because someone was about to club me from behind. Because it was from behind, I never got a good look at who it was, but he probably used a two-by-four to hit me, a popular weapon in New Orleans these days. I hit the pavement and skidded across. It was the kind of impact that leaves logic knocked loose, so when the kids jumped on top of me asking "What have you got?" I lifted my head as if to respond. Fortunately, the damage from the blow kept me from saying what I was really thinking, otherwise they might have finished the job. I lay paralyzed in the middle of the street while I felt their hands in my pockets. They took my iPhone, left the cash, and then they were gone.

Now, as I picked myself up from the street, I scolded myself for being so stupid. I should have driven. I found my glasses where they had landed across the street. The skin on my knuckles was scraped off and bleeding. Someone called the police, and since there was little chance they'd arrive soon, I continued around the corner to complete my errand with blood coming out of my ear. It was partially the stupor, and partially my dedication to multitasking: I was supervising a group of volunteers at an event in the park, I had the proofs to our pit bull calendar to deliver, and another event later that night. I didn't have time for injuries.

The detective assigned to the case met with me several days later to tell me how difficult her job was. She told me that since I didn't see them hit me, it would be impossible to get a conviction. Did she think I was an idiot? I wasn't expecting a conviction. Two years earlier I had sat in the courthouse and watched a jury acquit David Bonds in the murder of Dinerral Shavers. Before the verdict came in, I saw the teenage witnesses on the stand and knew that no matter the verdict, the great tragedy would be that they'd all likely end up dead. And a week later, the key witness was gunned down. So I wasn't in this for a conviction; that's a losing game. I just thought it might be smart for someone to prevent these kids from eventually killing someone, or prevent someone from killing them.

I gave the detective a list of witnesses and names of other people who had encountered this gang -- a journalist who had seen the gang just before they got to me, a man who had their photos on a cell phone they had stolen and returned. I even learned their approximate address and that, like many New Orleans children, they had no parents in the city. They were on their own. There was even a video of them causing trouble at a local convenience store -- a video the police didn't know about until it aired on the news. But the police did nothing with this information.

In the weeks that followed, I learned that the damage to my ear was severe. There was a large hole in my eardrum, which resulted in a 40 percent hearing loss and recurring infections. When it didn't heal on its own, I had a skin graft, which required that my ear be removed from the side of my head and then sewn back on.

This crime was classified as a simple robbery.

In fact, it had been six months since I'd taken a walk on these streets, after a bunch of kids shot 16 rounds in front of my house; the police arrived, barricaded my car and refused to allow me to leave for an event. "We need to talk to you," they said and then left without speaking to me. Once they were gone, the kids stowed their weapons under the house next to mine. A few months later, I found myself running through my dark yard to retrieve my dogs while someone in the yard behind me fired a machine gun into the air. This is the New Orleans I now know.

If you are looking for drugs, you have a wealth of opportunities for comparison shopping on my little block. There are gangs selling from half the stoops, although they don't actually live here. They drive in to do business, taking over the stoops of the elderly, who are too frightened to report anything. Early in the morning, you can watch people picking up their stash for work, and then again in the evenings on the way home. Sometimes, passage through the block is impossible, due to the stalled vehicles hoping for their dealer to return. The police tell me they have the situation under surveillance. They've been telling me that for the past two years. When I recently wrote to our new police chief to ask how many years of observation were necessary before action could be taken, I didn't get any response at all.

It wasn't always this way. Three years ago, when I moved from a rental in Bywater to purchase a renovated house in the Holy Cross neighborhood in the Lower Ninth Ward, there was no crime here. There were virtually no people. Friends expressed their concern at my living in a completely abandoned neighborhood, but I quickly grew used to the glorious quiet. The silence was broken by tour buses, hoping to survey the destruction that still hadn't been cleared, surprised to see that there were actually people living there again, stopping to ask which way it was to the Brad Pitt houses they'd seen on CNN. In the mornings I could walk my three dogs past block after block of empty housing, the doors still standing open with debris visible inside. The last time I walked my dogs, one of the dealers outside the bar on the corner said he'd shoot my 10-year-old mastiff if he ever looked at him funny again.

Whenever I call the landlord of the house next to mine, to let him know about the guns, or the constant drug dealing, or the dirty diapers tossed from his property onto mine, he says he is powerless to take action. After all, he left the city to avoid dealing with people like the ones to whom he currently rents -- and with Section 8 paying a premium, he's just one of dozens of slumlords who have poisoned the neighborhood for all the true neighbors who have returned.

Because the Industrial Canal separates the Lower Ninth from the Upper, and because there has been no substation installed on our side of the canal, and because the police are too lazy or uninterested to cross the bridge and drive through and even maybe sometimes get out of their cars, my neighborhood is a prime location for illegal business of any kind. Although we are one of the city's targeted "Recovery Zones," the only businesses that have opened are liquor stores. Two blocks from me, a gas station sells booze without even bothering to get the proper permits. Anything goes. Because the city allows it. Because, like the slumlord next to me, they feel no responsibility for anything other than their own sorry ass.

So five years after Katrina, I find myself longing for those early, golden, empty days, when the streets were barren and we could find parking anywhere we went. Back then, I took great offense at the people who voiced their hope that many of the displaced might never return. Now, in spite of my better judgment, I've become one of them.

A month after my mugging, while I was still deaf on one side, I saw my attackers again. I was sitting in a coffee shop, a few blocks from where they had left me lying in the street. They were standing at the counter, harassing the woman who was working her shift alone. Two were asking for water, two were edging closer to joining her behind the register. Then they locked their eyes on me, froze for a moment, and began to run. I sent an e-mail to the precinct captain, who in the intervening weeks had assured me she wanted to do all that could be done. I told her that I'd spotted them, let her know their location, the direction they were traveling.

"Now remind me," came her response, "what was it that they've done?"

This is New Orleans five years after the storm -- not so different, after all, from what it always was.