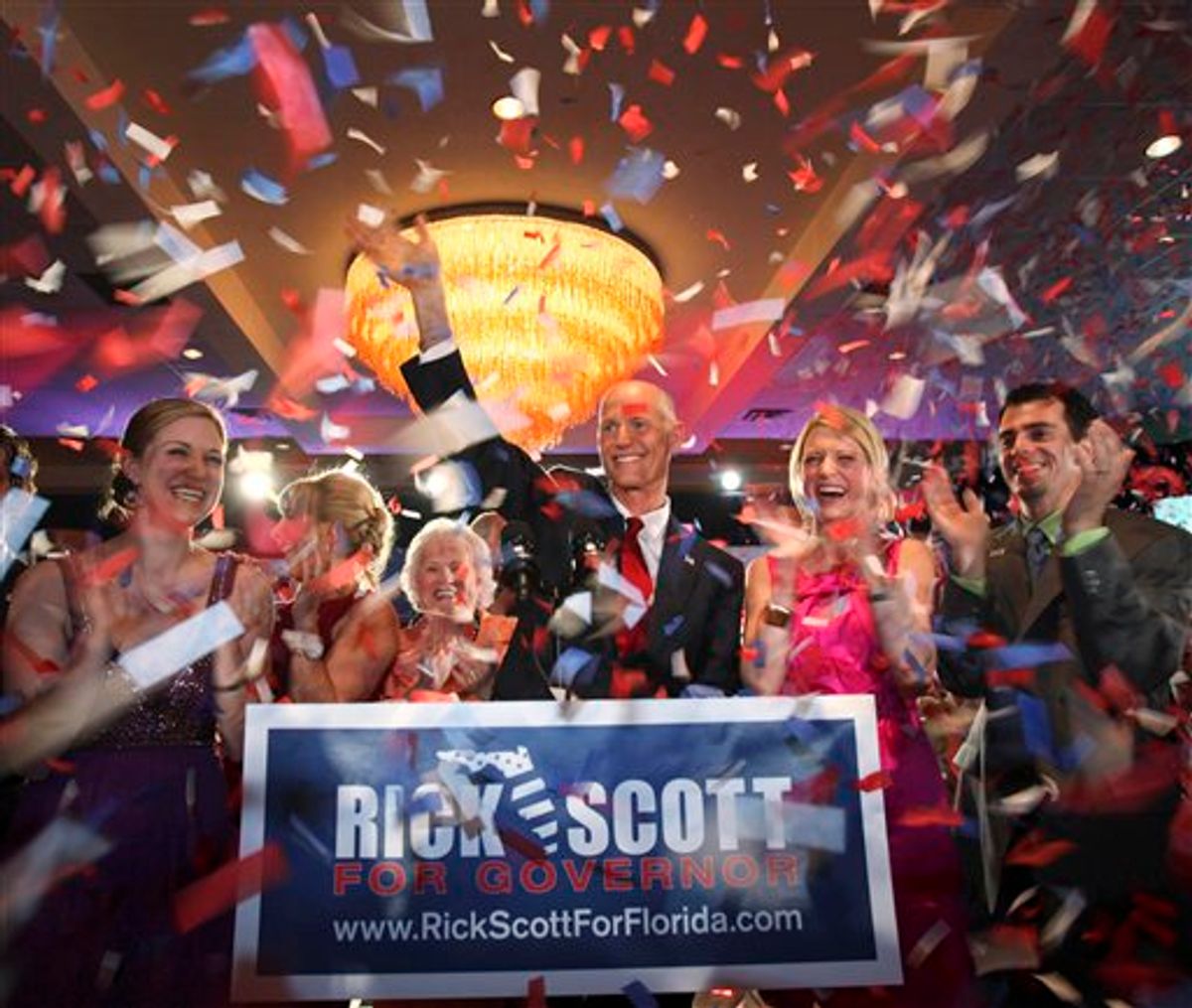 Not for the first time this year, I woke up today -- the morning after several more states held Republican primaries -- and found myself thinking of Oliver North. It's been 16 years since the former Iran-Contra figure was rejected by Virginia's electorate, but the example of his failed U.S. Senate campaign is more pertinent than ever.

North, for those who've forgotten, squandered what should have been an unlosable election for the GOP in 1994. He was running in a red state (Virginia, then not nearly as purple as it is today), against a badly damaged Democratic incumbent (Chuck Robb, his reputation sullied by stories about wiretapping and marital infidelity), and in a national climate ridiculously slanted toward the GOP (it was Bill Clinton's midterm). Against any generic Republican nominee, Robb would have lost -- and badly.

But North wasn't any generic Republican: The taint of Iran-Contra and his embrace of his party's far-right fringe enabled Robb to turn the race into a referendum on his opponent -- and to win. The silver lining for Republicans, of course, was that North was an aberration: Just about everywhere else in '94, vulnerable Democrats fell, allowing Republicans to take back the House and Senate and a host of governorships.

On the surface, the parallels to '94 are striking: A first-term Democratic president with middling poll numbers, big Democratic majorities in the House and Senate, and a reinvigorated GOP base. The basic recipe is in place for a similarly seismic GOP victory. But as Tuesday night's results reminded us (yet again), there's a potentially big difference: This year, the GOP has nominated a whole bunch of Oliver Norths -- Tea Party-backed candidates who are seriously jeopardizing the party's prospects in races that should be gimmes.

Take Rick Scott, the controversial healthcare executive who knocked off the GOP establishment's favorite, Bill McCollum, in Florida's gubernatorial primary. The difference in each GOP candidate's fall prospects is jarring. In a recent poll, McCollum was running neck-and-neck with the Democratic nominee, Alex Sink -- but Scott trailed by 16 points. The GOP electorate's embrace of Scott, who was forced out of Columbia/HCA when the company was ensnared in a massive fraud investigation in the 1990s, is reminiscent of North's nomination in Virginia 16 years ago. Then as now, the GOP base could have tabbed an electable, (relatively) mainstream candidate, but hubris got in the way.

Nor is the governorship the only high-profile office in Florida the Tea Party might muck up for the GOP. Marco Rubio's victory in Tuesday's Senate primary was a foregone conclusion; his original opponent, Charlie Crist, dropped out to run as an independent months ago. But the basic dynamic is the same: Rubio, is beloved by the GOP's base but polarizing to swing voters. With Crist, the GOP would have won the Senate race with ease. With Rubio, their odds have decreased and their fate now depends on whether enough of the Democratic establishment rallied behind Crist. If that happens and Kendrick Meek, who won the Democratic nod on Tuesday, is marginalized, Crist can defeat Rubio.

The hand of the Tea Party was apparent elsewhere on Tuesday, though the implications are slightly different. In Arizona. John McCain moved decisively to the right to stave off a primary challenge from ex-Rep. J.D. Hayworth. There's no reason to believe McCain will lose in November, but the steps he's taken to survive politically have come at a cost to his reputation. (Although, as I've noted before, McCain's posturing can also be seen as part of a pattern of sore loser-dom.)

The Tea Party seems to have scored a more decisive triumph in Alaska, where little-known Joe Miller leads Sen. Lisa Murkowski with more than 85% of precincts reporting. If Miller does hang on, he should be safe in November, given what a deeply red state Alaska is. But his success is a reflection of the influence the Tea Party is exerting in GOP primaries across the country -- and the results aren't always as benign: Sharron Angle, Rand Paul, Ken Buck, and  Pat Toomey, among others, are all products of the Tea Party movement and could all lose races that Republicans should win with ease this year.

In 1994, nominating Oliver North made for one disappointing result for the GOP on an otherwise perfect night. But in 2010, they've nominated many Oliver Norths -- and it could be the difference between winning and losing the House, Senate, and even a key governorship.