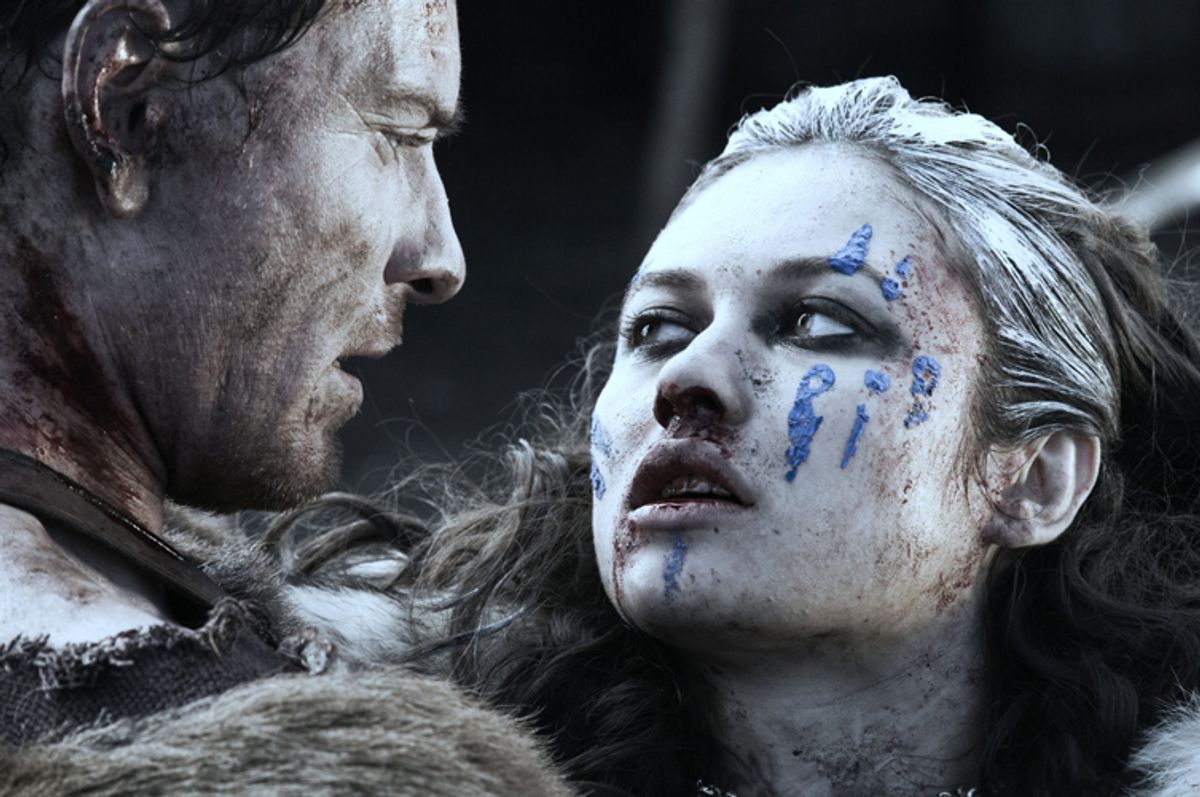 When was the first time an imperial power overreached itself and got mired in some remote and seemingly primitive backwater, confronted with a numerically and technologically inferior foe who could not be defeated? It's no good talking about Vietnam or Algeria or the American Revolution; even asking the question is like asking when was the first time some guy lied to his wife about where he'd been and what he'd been doing.

Something comparable probably happened to the Babylonians and the Assyrians and the Egyptians, but British writer-director Neil Marshall's intense period action flick "Centurion" captures the Roman Empire's second-century frontier, in what we'd now call Scotland, as a cautionary example. This is such a well-rehearsed kind of movie — the bloody, filthy, sword-and-sandal epic, customarily starring Russell Crowe or Mel Gibson or some other handsome dude with 'tude — that it's startling to discover how compelling a good example can still be. "Centurion" has its moments of manly cornpone camaraderie and certainly isn't blazingly original, but it offers riveting storytelling, gorgeous cinematography and scenery, loads of gore, and a politically complicated history lesson.

Best known so far for his 2005 gals-versus-troglodytes horror film "The Descent," Marshall belongs to an intriguing new generation of British directors who combine a pop sensibility with a traditional level of craftsmanship. "Centurion" brings him together with Irish actor Michael Fassbender (of "Hunger" and "Fish Tank"), a tremendously good-looking rogue who's going to become a huge star if his intelligence and good taste don't get in the way. Fassbender fills the Crowe-Gibson role here as Quintus Dias, a Roman centurion who leads a small group of comrades deep into the Scottish wilderness after their legion has been ambushed and shredded by a band of bloodthirsty Pictish barbarians.

Except that Marshall never allows us, or even Quintus, to feel anywhere near that comfortable about who the good guys and bad guys are. Like most other soldiers, Quintus is fighting for his personal honor, for his comrades, for a commander he loves and respects. He doesn't care one way or the other about the abstract ideal of the "pax Romana" — bringing order and civilization to a distant, violent land — and he comes face to face with the fact that the Picts, the native Celts of northern and western Britain, don't want any part of it.

Of course we're rooting for Quintus and his men to get out of their ancient-world Big Muddy and come home again. They are decent and honorable soldiers (with one notable exception), and in the grand tradition of war movies, they come from all over the multiracial and multiethnic Roman Empire: There's a Greek, an African, a Middle Eastern tribesman, a Roman street tough and a guy who dreams about buying a farm in the Tuscan countryside if he ever gets out of this shithole.

But as "Centurion" progresses, it's tough to avoid the sensation that these guys are in the wrong place at the wrong time. If we believe the lurid stories told by Pictish king Gorlacon (Ulrich Thomsen), his people have suffered from Rome's rape-and-pillage policies for years, and let's say that as the story unfolds his desire for vengeance becomes highly understandable. He sends his most fearsome warriors after Quintus and his men, led by the Mata Hari-like Étain (Olga Kurylenko), a mute and bloodthirsty female warrior. (Women sometimes did go to war among the Celts, but I don't know how many of them had two-toned hair and Cleopatra-style eye makeup.)

If "Centurion" is a blend of old-school action movie, historical fable and outright fantasy, Marshall handles all those elements ably. Fassbender gives a tremendously demanding physical performance and makes a charismatic hero who is faced little by little with the realization that all the moral certainties of his world have melted away in the British mud and blood and snow. (Quintus is supposed to speak Pictish, but unless my ears deceive me, Fassbender is speaking the Irish Gaelic he most likely learned in school. The Picts presumably spoke a language closer to Welsh or Breton.)

Into the fantasy category falls Quintus' liaison with an exiled Pictish witch named Arianne, played by the gorgeous English actress Imogen Poots (and I really hope she can become a star with that name). It's a lovely but not entirely convincing interlude, suggesting that individuals — Quintus, you, me, Conrad's Mr. Kurtz — have the option of escaping from history. Part of Marshall's genius lies in the fact that you're free to enjoy "Centurion" as a rousing, high-integrity B movie. But I'm afraid he's also preaching an inescapable historical gospel on how the vanity and corruption of powerful empires lead them to learn the same painful lessons, over and over again.