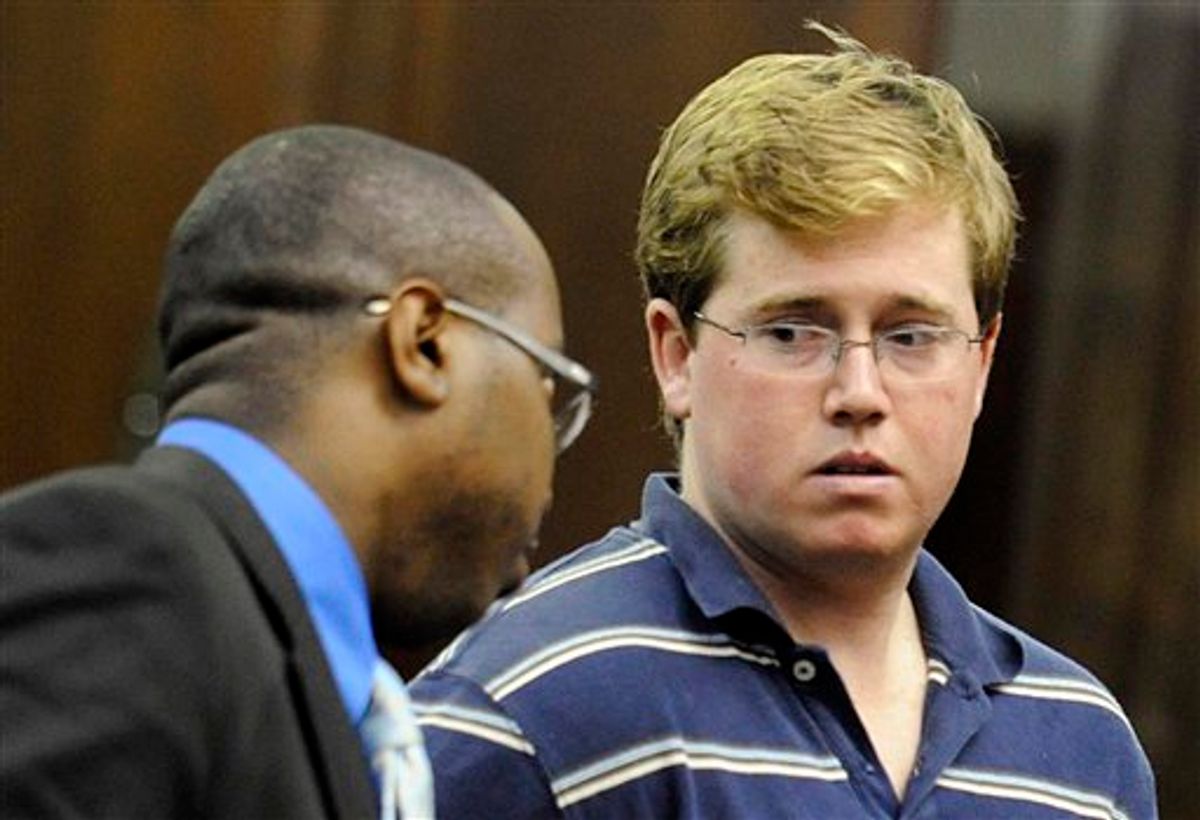 ** RETRANSMISSION OF NYR103 FOR ALTERNATE CROP ** Michael Enright, right, confers with his attorney Jason Martin, during his arraignment in a New York City courtroom on charges that include attempted murder as a hate crime, Wednesday, Aug. 25, 2010. Enright is accused of slashing taxi driver Ahmed H. Sharif with a hand tool on Tuesday, Aug. 24, after the driver said he was Muslim. (AP Photo/Steven Hirsch, Pool) (AP)
--

Michael Enright, the raging drunk who nearly killed a Muslim cab-driver in Manhattan this week, is being held without bail following his arraignment on hate crime charges. Enright, a film student, is finishing a documentary about Marines serving in Afghanistan, where he was embedded earlier this year for 35 days.

Enright stabbed the man after an apparently civil conversation about the driver's Muslim faith. Then Enright allegedly yelled, "This is the checkpoint," and slashed the drivers throat and arm.

According to friends, Enright was usually kind and mild-mannered. He volunteered with Intersections International, a liberal organization dedicated to religious tolerance and peace.

"The person who volunteered for us is a really good guy," Intersections International executive director Rev. Robert Chase told the media. "He's responsible, he's been generous, he's concerned about the issues in the world."

"He's a really nice guy to be around," a college friend told the New York Post. "He's a great kid," a neighbor said.

But: Enright was arrested twice last year, for disorderly conduct and underage drinking. According to the Post: "College friends said Enright had been sober for the last year."

And a friend tells the Daily News that Enright had seemed troubled and angry since his return from Afghanistan.

The Daily News also reports that cops found a diary on Enright that was filled with anti-Muslim rantings:

When he was arrested Tuesday in midtown, Enright had a personal diary filled with pages of "pretty strong anti-Muslim comments," a police source said.

The source said Enright's journal equated Muslims with "killers, ungrateful for the help they were being offered, filthy murderers without a conscience."