Paul Allen sues the Web for being obvious 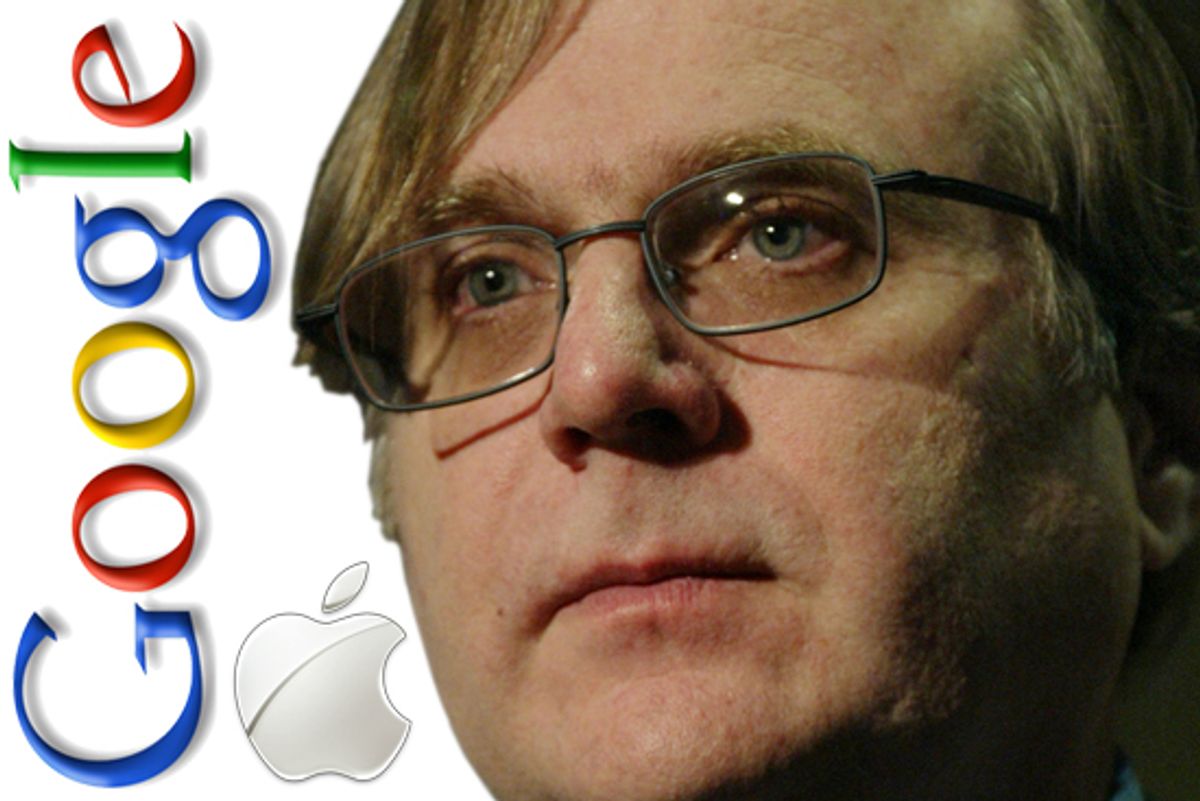 Paul Allen, Microsoft co-founder and the world's fourth richest man according to Forbes Magazine, speaks to the media after he announced plans to build a $20 million science fiction museum adjacent to his Experience Music Project, in Seattle, Washington, April 17, 2003. Allen, whose estimated 2002 worth was $25.2 billion, is a music and science fiction fan and temporarily named the upcoming project "The Science Fiction Experience." It is scheduled to open in summer 2004. REUTERS/Anthony P. Bolante APB/HB (Â© Reuters Photographer / Reuters)
--

The suit claims that the companies have violated patents granted to Interval Research, a Silicon Valley research lab Allen founded at the height of the dot-com boom, poured $100 million into, and then closed up after failing to successfully commercialize any of its technology.

Interestingly, as the Wall Street Journal reports, "notably missing from the defendants' list are Microsoft, in which Mr. Allen remains a major investor, and Amazon.com Inc., which is based in Mr. Allen's hometown of Seattle. [A spokesman for Allen] "declined to comment on the selection of defendants."

The absence is notable because a cursory look at the patents in question suggests that they are broad enough in scope that just about anybody with a state-of-the-art website could be construed as operating in violation of them. But the practices covered by the patents are also so obvious that there is little question that Microsoft and Amazon must also be engaging in them too. So are those companies paying license fees to Interval? And if so, why not disclose that?

Here are the four patents:

The first patent (507) is summarized in the complaint as having to do with "making and using websites, hardware, and software to categorize, compare, and display segments of a body of information ..." The second (652) deals with "making, using, offering, providing, and encouraging customers to use products that display information in a way that occupies the peripheral attention of the user..."

But the last patent (682) is the most intriguing, so I pulled up the legal filing that included the actual patent.

Here's the abstract describing the patent:

You see, there's just a whole lot of stuff out there on the Web, and it's changing all the time, and it's very confusing.

...[T]his proliferation of content, such as audio, image, and video content, presents certain challenges from the perspective of users seeking content of current interest. First the sheer volume of content available makes it difficult for users to find the content in which they are most interested in accessing at any given time. Apart from having to sort through the enormous volume of content available, much of the content of potentially greatest interest, at least to many users, is dynamic. At certain times, a file or other electronic resource may be of great interest while at other times, or perhaps even most of the time, it is not of great interest or not interesting at all.

So here's a brilliant idea! Let's come up with a dynamically generated alert system to solve this problem. We'll patent it, but fail to incorporate it in a product, and then a few years down the line, when we suddenly notice that all the major Web-based businesses have somehow coincidentally also realized that this was a great idea, we'll sue them. Easy money!

HTWW has long tended to take a dim view of companies that rely on intellectual property litigation as their primary form of revenue. But one has to imagine that Allen thinks he has a pretty good case, simply from the sheer scale of his attack. You don't sue the entire aristocracy of the Web (aside from Microsoft and Amazon) lightly. Just choosing to sue Google and Apple alone demonstrates remarkable chutzpah.

Nonetheless, the entire spectacle is ridiculous and Paul Allen should be embarrassed. Allen has been spectacularly unsuccessful in many of his post-Microsoft endeavors, and I'm betting he will fail here too. Dynamic alerts? Attracting peripheral attention? Using a browser to make sense of information? These are ways of exploiting the Web that are beyond obvious, as proven simply by the fact that all the companies named in Allen's lawsuit would be regarded as run by abject imbeciles if they did not incorporate such features.

Interval Research employed oodles of top computer scientists in its heyday, but if this was the best they could come up with in terms of potentially commercializable patents, no wonder Allen ended up shutting the lab down.