Some came from several time zones away to be at the "Restoring Honor" rally. But they didn't seem to know why 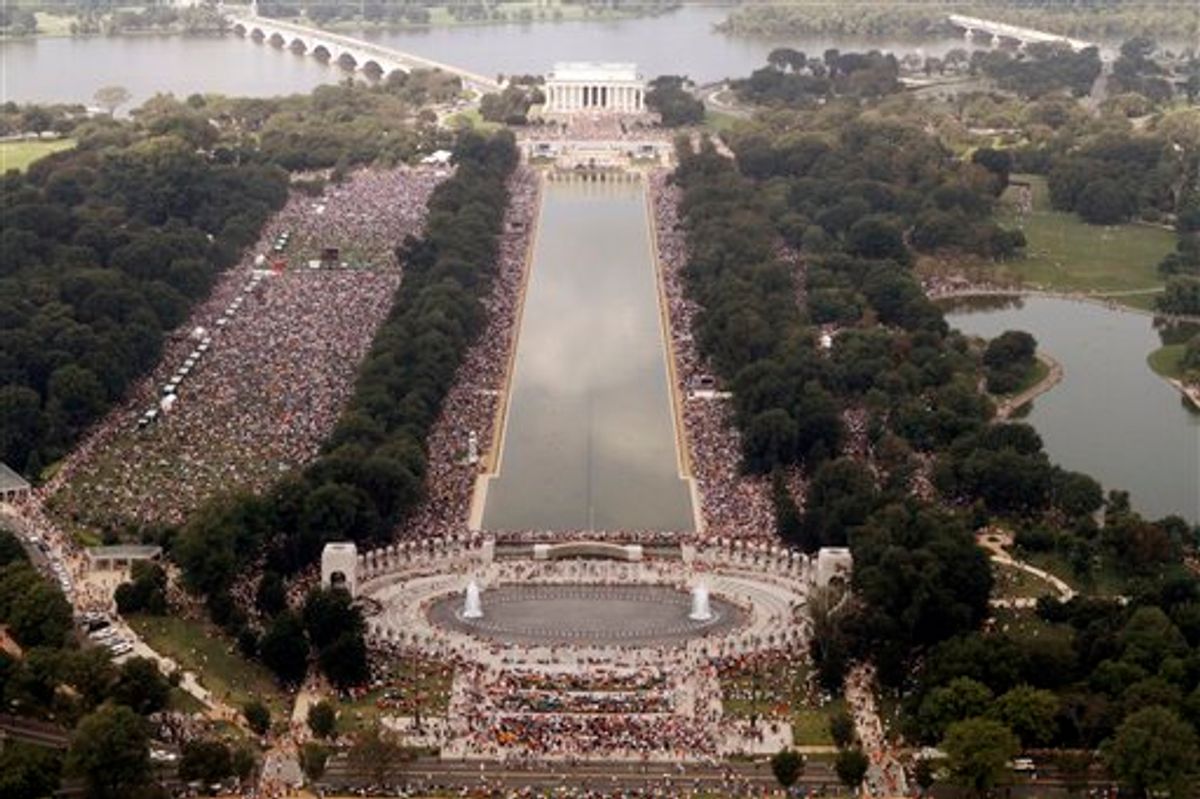 The crowd attending the "Restoring Honor" rally, organized by Glenn Beck, is seen from the top of the Washington Monument in Washington, on Saturday, Aug. 28, 2010. In the foreground is the National World War II Memorial and the Lincoln Memorial is at the top. (AP Photo/Jacquelyn Martin) (AP)
--

Glenn Beck’s “Restoring Honor” rally on Saturday was big and white and agitated. But in an informal survey of attendees, it was difficult to pin down what exactly motivated them to come to Washington, many from far away.

“I am here because of America,” Ann Gardenhour told me, adding that the purpose of the rally was to “remember America.”

A relatively dense and overwhelmingly white crowd stretched from the steps of the Lincoln Memorial out past the Washington Monument. Thousands strained to hear Beck and his most prominent guest, Sarah Palin, because they couldn’t get in range of the massive TV screens and speakers surrounding the Reflecting Pool. A friend of mine walked the whole stretch of the rally and counted 27 African-Americans -- three of them were onstage giving speeches. I could count the number I saw on my fingers.

Members of the crowd seemed genuinely enthusiastic, but when I talked to them, they uniformly resorted to clichés to explain what the rally was about.

Gerald Chester, a truck driver from Elkhart, Ind., said he came because of Beck. “What he is about is a good thing, restoring honor,” Chester said. “Bringing God back into Americans’ lives is important.” When asked what attendees should do to accomplish this, Chester replied, “That’s a good question.”

Kristine Sullivan said she was “here to take back America. I want it back. I want our country back.” She said the purpose of the rally was to encourage people to vote for “whoever is up there to support the American people.”

Alexander McGhee said he was “afraid of where our country is going.” He said people should “do absolutely everything and anything they can possibly think of that might further the cause of restoring honor to this great nation.”

These were Beck’s people. Many whom I talked to mentioned his name without being prompted -- but none voluntarily brought up Palin.

The rally was controversial, of course, because it occurred on the same date and in the exact location of Martin Luther King’s 1963 “I have a dream” speech. Beck, who infuriated many last year with his declaration that President Obama is a “racist” with “a deep-seated hatred for white people or the white culture,” had said the timing was coincidental, but then drew fire for claiming that his rally would “reclaim the civil rights movement.”

At the rally, a Beck-narrated video displayed on the massive screens attempted to co-opt King’s story, calling attention to the supposed similarities between King’s struggle and Beck’s own vision for the future. In her speech, Palin wrapped herself in “the spirit of Dr. Martin Luther King Jr.” The audience members I spoke with didn’t mention race at all, just a broad concern about America.

Here are some highlights from my conversations with rally-goers: