"Change of Plans": Dinner for cheaters

Scallops, Bordeaux and other people's spouses are on the menu in this classic French dinner-party farce 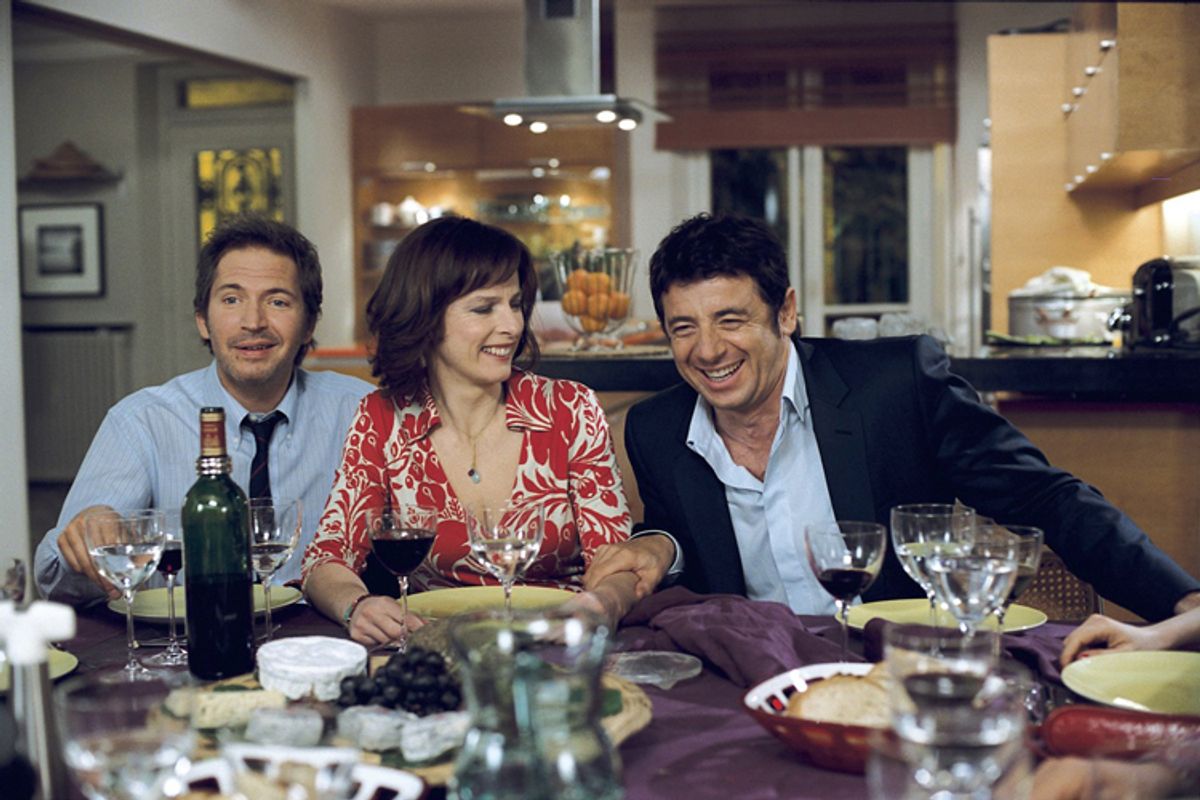 Danièle Thompson is something like the French female answer to Woody Allen — a comparison Thompson herself frequently invokes — and I guess whether you consider that a compliment or an insult is up to you. A longtime writer who moved into directing fairly late, she specializes in brisk, talky ensemble comedies that begin by seeming maddeningly preoccupied with the adulterous love lives of upper-middle-class Parisians. By the end, they've gotten under your skin, thanks to Thompson's near-classic sense of comic construction and her moments of sharp emotional insight.

Thompson's previous film, released in the United States as "Avenue Montaigne," was a modest art-house hit in 2007, and her new "Change of Plans" feels like a potential early-fall crowd pleaser. It assembles a large group of old friends (along with a few wild cards and newcomers) for one of those volatile, incestuous dinner parties that represents a turning point for every one of the guests, mostly in unanticipated fashion. Then Thompson skips forward to the night of the reunion dinner exactly a year later, when we find out whose marriage has crumbled and whose has unexpectedly gotten stronger, who has become a bestselling author or opened a tapas bar, who has wound up in a wheelchair or has seen her cancer go into remission, etc.

There's nothing even a little bit original about any of this, but in a way that's the point. Thompson's specialty lies in the superlative execution of a French light-comic style inherited as much from Beaumarchais and Molière as from Jean Renoir. "Change of Plans" may not be earth-shattering cinema, but it's masterfully structured and edited (by Sylvie Landra) with a first-rate cast. We begin with a scene of awkwardness and discomfort — specifically, with pit-bull lawyer and dinner hostess M.L. (Karin Viard) in the gynecological stirrups while her doctor, Mélanie (Marina Foïs) gossips on the phone with her lover. We end, of course, with redemption, in the form of an impromptu flamenco dance party for all concerned.

But the dramatic centerpiece in "Change of Plans" is the handsomest, most conventional and unhappiest marriage on display, that between hotshot lawyer Lucas (Christopher Thompson, the director's son and co-writer) and desperate housewife Sarah (Emmanuelle Seignier, aka Mme Roman Polanski). There's a nice rhythmic and tonal balance at work here: Everybody else in the movie is trending toward some version of comic resolution, of forgiving their own sins and those of others. There's no joyous exit door available for these gorgeous but doomed aggro-yuppies.

It may seem like damning with faint praise to praise Thompson for the precision and pace of her scenes, or her actors for their exquisite comic timing: the sharp-edged, sexy Viard, with her litany of double-takes; the dreamy, directionless Boon, sleepwalking into and then out of an implausible romance; Arditi and Chesnais, dancing together to '50s rock 'n' roll. But after a while technique adds up to emotional substance, in a funny way. As soon as I forgot to be irritated by the characters in "Change of Plans," they made me laugh and then they made me cry.

"Change of Plans" is now playing at the IFC Center and Lincoln Plaza Cinema in New York, with wider release to follow. It's also available on demand from IFC and from many cable and satellite providers.

Change Of Plans Movies Our Picks