Having kids made me a movie wuss

I always thought I'd be a rational father. But seeing a child in danger drives me over the edge 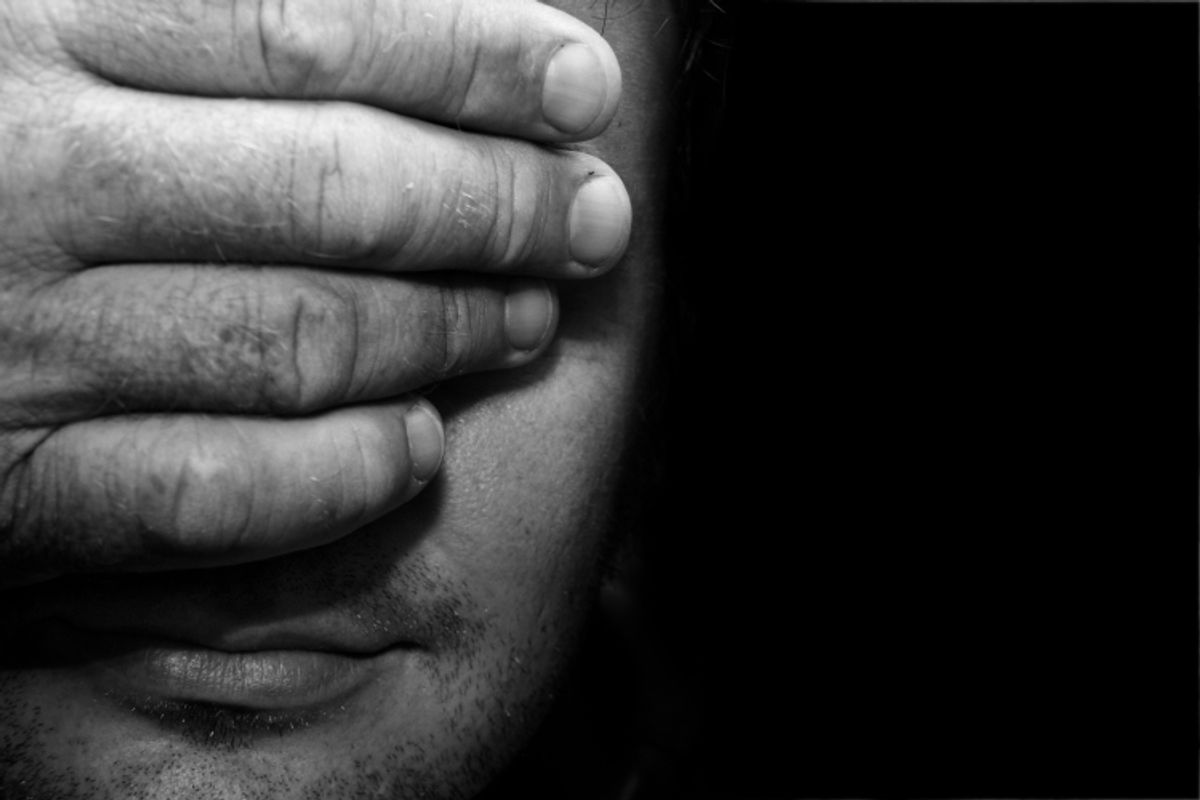 This Friday marked the premiere of a movie called "The Last Exorcism." It is a faux cinéma-vérité documentary about a deeply troubled teenage girl racked by demons. It may be a piece of art or a hunk of trash. It may spin interesting new variations on the possessed-girl template, or it may be the holy water sprinkled on the genre's corpse. None of this will matter because I won't be watching.

Any more than I'll be watching, in the weeks to come, "Let Me In" (severely bullied boy seeks help from a neighboring vampire girl) or "Case 39" (12-year-old girl's parents try repeatedly to murder her, to the point of stuffing her in an oven). Or putting "Kick-Ass" on my Netflix list or, except under great duress, escorting my kids to the latest Harry Potter movie. And my reasons have nothing to do with esthetic principles, of which I have few. It's just that, after 10 years of parenthood, I have become ridiculously, intractably, humiliatingly averse to seeing children in peril.

And I don't think it's getting better.

I first became aware of the problem in 2001. My older son was then a little over a year old, and for a grown-up treat, my partner and I called in a babysitter and went to see "A Beautiful Mind," thinking it would be the uplifting story of a genius mathematician who struggles with schizophrenia. Which it was. Until the moment when John Nash (Russell Crowe) leaves his baby in a bathtub and turns on the water and walks out of the room.

He's convinced that his imaginary friend Charles is watching the baby when in fact no one is there. The water's rising … the baby's crying. An ancient suspense device, I told myself, traceable to the days of penny dreadfuls and serialized melodramas. And how little its provenance mattered in that moment! A cold ribbon of sweat welled up from my temples and dribbled down my face and gathered in my collar bones. My skin prickled. My heart beat like Judgment Day. Get … the baby … out of the bath.

The jitters of a new dad, you'll say. I assumed the same thing, but no amount of parental experience would make it go away. Just a couple of years ago, I went to see "Slumdog Millionaire," thinking it would be the uplifting story of a young man who finds salvation in a game show. Which it was. Until the moment when a boy (not our hero) is chloroformed into unconsciousness and then blinded with a scalding spoon. A few seconds of screen time, no more, but I watched in a vise of horror until I couldn't watch anymore. And even when I closed my eyes, all I could see were my boys being overpowered, sedated, maimed in exactly the same way. All I could feel was how easy it would be to do this very thing to them.

Where are they now? I asked myself. (With their aunt.) Do I need to go there? (Of course not.) Will anything bad happen if I stay here? (Don't be silly. It's just a movie.)

It's just a movie. But it doesn't have to be a movie. And it doesn't have to be a boy. A few years back, I was standing in a Barnes & Noble in Chelsea, reading the opening pages of "The Lovely Bones." On one side stood my brain, sallying forth on a stream of prose, pausing to note the charm of the voice, marveling at how fleetly a young girl's rape and murder could be narrated. On the other side was my body, absorbing each act of violence as if it were a toxin. Before I'd even finished the first chapter, my stomach had twisted itself into a knot so agonizing that I had to toss the book down and walk away.

Because everything that happens to a child on the screen or on the page belongs, however remotely, to the realm of the possible. Which makes it, to a certain kind of parent, a physical insult: cell deep, impervious to logic. Indeed, of all the adjustments I anticipated in becoming a parent — less sleep, less sex, more alcohol — this is the one I never saw coming. That, in looking at other children, I would be forced to see my own. That every child's death, imaginary or no, would diminish me.

It was particularly embarrassing for me because, from the start, I had refused to be one of those fear-shackled parents. I wasn't going to give my kids ID bracelets. I wasn't going to file their fingerprints with the local police station. I wasn't going to fill their heads with pointless horror stories. When the time came, I would let them roam the block and walk to school by themselves, and to anyone who objected, I would point out how statistically rare stranger abductions are and how important it is to nurture our children's independence. None of that nanny-state brooding for me. I was going to be Rational Dad.

And how swiftly that pose evaporated every time I entered the darkened room of a theater!

One could argue, I suppose, that art's function is to break down our brain's defenses, the better to usher us toward catharsis. But whenever I see a fictional child abused or stalked or wounded or murdered — or even just betrayed in some irretrievable way — it isn't catharsis I experience but a chain of sawed-off nerve ends.

The only comfort I can derive, honestly, is knowing that, in my sheer wussiness, I have company. There's a small chance I'm legion. To extrapolate at least from my friends and family members, there's a long and winding trail of books and movies that parents dance around as if they were unexploded ordnance. "The Kite Runner"? Nope. "A Map of the World"? Sorry. "The Orphanage"? Pass. "Precious"? Uh uh. "Bastard Out of Carolina"? Try again.

But that policy of avoidance can take us only so far once we realize that terror and death are woven into the entertainment vehicles specifically targeted at our kids. I don't know that I've seen a more dumbfoundingly sadistic movie than "Dumbo"; "Pinocchio" isn't far behind; "Bambi" is a close third. A friend of mine stopped reading the last installment of "Harry Potter" because she had a sudden epiphany: "It's all about grown-ups trying to kill kids." Which is the subject nearest and dearest to the hearts of the brothers Grimm. Hansel and Gretel, we may recall, aren't wandering through the woods because they got lost but because their parents left them to die.

In his famous book, "The Uses of Enchantment," Bruno Bettelheim argues that the very darkness of these stories allows children to move past their own terrors, symbolically conquering them through the use of surrogates. I would argue that the fear of losing children is something that parents cannot move past — can scarcely even imagine — because nothing lies on the other side of it. No wisdom, no purpose, no progress. The end of children is the end of everything.

So I guess that's why I hate seeing kids in peril. But when I speak of this squeamishness, I'm always at pains not to paint it as a higher arc of sensitivity or as an implicit rebuke to non-parents. ("You can't know our pain!") On the contrary, I consider it deeply regressive: an inability to distinguish truth from illusion that would qualify as childlike if it weren't so lacking in a child's wonder.

And the end product isn't always recoil; sometimes it's just a recasting of old artifacts in a strange new light. A friend of mine, rereading the "Little House" books with her daughter, was astonished to find that the treasured storyscapes of her childhood were now festering with dysfunction. How poor the Ingalls girls were! How hard and peripatetic their lives! Pa was no longer the beloved patriarch of memory but a shiftless ne'er-do-well, exhibiting all the signs of ADHD. Why couldn't he just keep it together? Earn a decent living?

Something similar happened to another friend when she reread the Pippi Longstocking stories with her daughter. She couldn't get past the fact that Pippi and her friends were wandering alone, unmonitored, undefended. Where were the parents? (Her daughter, by contrast, reveled in Pippi's strength and resourcefulness.) Still another friend, watching a scene of mass carnage in "Jaws" more than 30 years after its original release, found her eyes snagging for the first time on … a baby. Abandoned on a dock. Barely visible at frame's edge and seemingly unnoticed by anyone — except by my friend, who could see nothing else. Why was nobody moving the baby to safety? Where the hell were the parents?

The incompetence or, worse, the plain aching absence of mothers and fathers is a time-tested staple of storytelling. But for some parents, I think, it's also a constant reminder that we will one day come up short. Seeing a movie like, say, "The Sixth Sense" — which, for me, is really about a mother trying valiantly but fruitlessly to shield her son — can be painful beyond endurance because it reaffirms that we will never be, in ourselves, sufficient. We won't always, we can't always, be there to save our kids when the ghosts come calling, when the sharks strike, when something hidden steps into the light.

Which raises the not-insignificant question of who really needs to be protected in those darkened movie theaters and living rooms and bedrooms. Who is at greatest risk? God knows we've seen — in newspapers, on TV, on the Internet — any number of field guides for shielding our kids from sexual content and violence. (The best, least excitable one I know is Jane Horwitz's "The Family Filmgoer.") If I had my way, there would be at least as many guides for shielding parents. "Thirteen": You'll want to kill yourself afterward. "The Pursuit of Happyness": It's a long, long road to the happyness. "To Kill a Mockingbird": Who lets their kids walk alone in the woods at night? "The Cat in the Hat": Where the hell are the parents?

In one regard, at least, I'm not a helicopter dad. Having sat with my sons through many a book and movie and TV show, I now believe they can safely accommodate much (though not all) of what Hollywood and the publishing industry can throw at them. It's me I'm not so sure about. My kids, being kids, have an innate knack for finding tracks of light in the darkness. My gift is something opposite: to see where the tracks end.