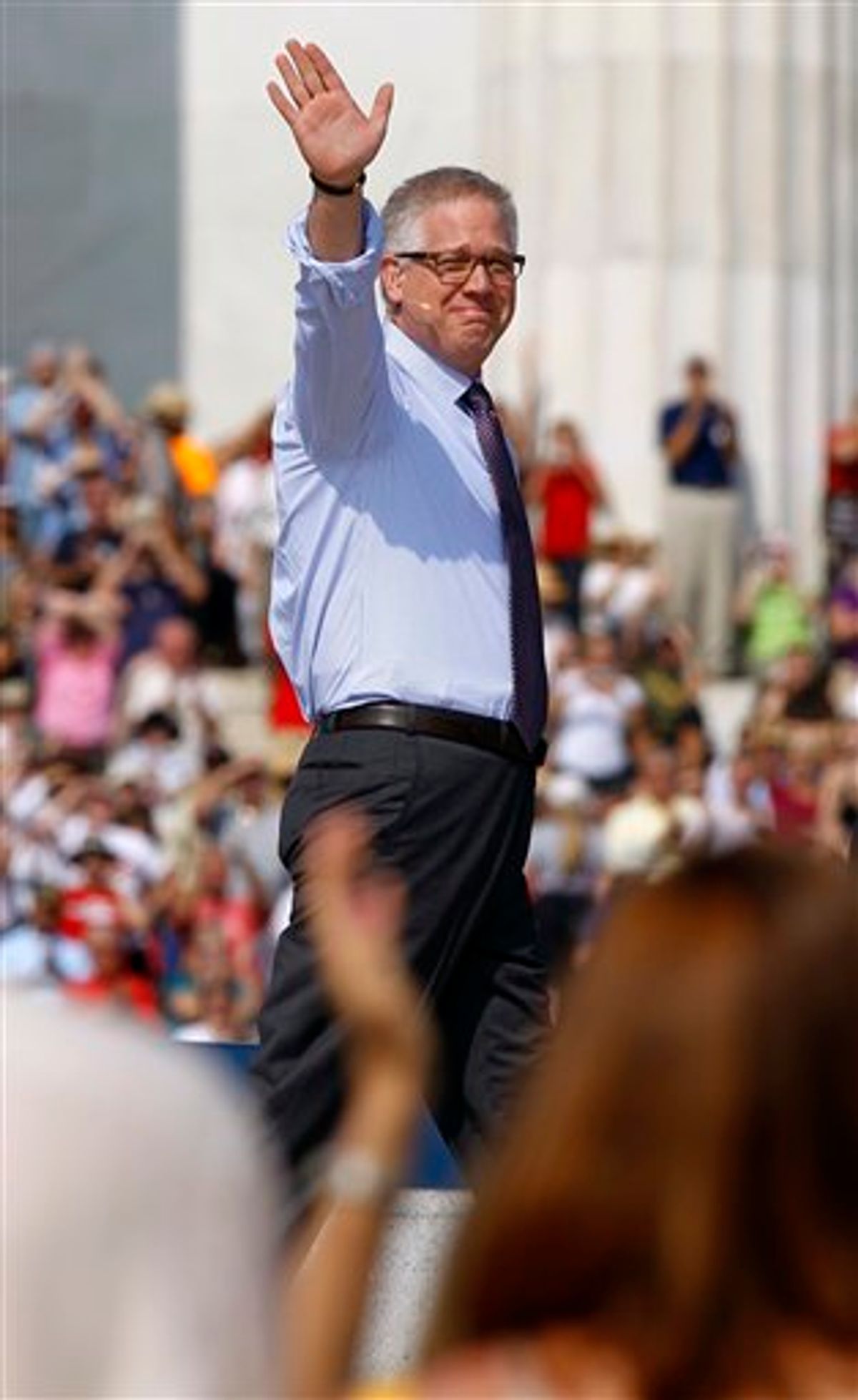 Glenn Beck waves as he arrives to speak at his 'Restoring Honor' rally in front of the Lincoln Memorial in Washington, Saturday, Aug. 28, 2010.(AP Photo/Alex Brandon) (AP)
--

Where to begin telling the story of Glenn Beck and Sarah Palin's "Restoring Honor" rally, on the site of the Rev. Martin Luther King Jr.'s historic "I have a dream" speech exactly 47 years later? As promised, we published Sarah Palin's 8/28 speech alongside King's, and Mark Benjamin reported from the event. I'm excited Beck announced his "Black Robe Regiment"; it's long past time to retire the white robes.

Since Beck insists the gathering wasn't about politics, but about religion, let's take a look at a couple of the religious figures there.

I was surprised when, early Saturday morning, Beck introduced a rabbi onstage with him. As I wrote earlier this week, Beck expressly said he wouldn't hold his rally on a Sunday, so as not to force people to work on the Sabbath -- and since the Jewish Sabbath is Saturday, I observed that maybe Beck wasn't looking for Jewish involvement. But there he was, introducing a rabbi! God bless him. Then the rabbi stood silent, while Beck's first religious speaker praised Jesus Christ our savior.

Who was the silent rabbi? Not surprisingly, it was right-winger Daniel Lapin, friend of convicted Republican felon/lobbyist Jack Abramoff, and Tom DeLay, too. Media Mattters digs up Washington Post profiles of Lapin that make sense of why he was there. A 2005 Post profile detailed Lapin's web of Republican buddies:

Every few weeks or so Rabbi Daniel Lapin finds a reason to fly east from his home in Mercer Island, Wash., near Seattle, and spend a few days here. He might be leading a Bible study on the Hill, having dinner with his "close friend" House Majority Leader Tom DeLay, breakfast with Karl Rove. Last year he came for a private Shabbat dinner with President Bush. "The president recognizes my enthusiasm for his faith," says the rabbi.

Usually on these trips Lapin stays with Jack Abramoff, a lobbyist who is an old friend of the Lapin family….Abramoff is under investigation for allegedly defrauding his Indian casino-owning clients and for allegedly breaking lobbying laws. In a stack of e-mails released this week by the Senate Indian Affairs Committee, several scandal sidekicks made unexpected cameos. Among them were Daniel Lapin and his younger brother David, rabbis from South Africa who are heirs to a 200-year-old rabbinical dynasty and very updated ambitions.

A 2006 Post article revealed that Abramoff moved client money he wanted to hide through Lapin's foundation:

E-mails show that Abramoff also moved client money through a conservative Jewish foundation called Toward Tradition, run by longtime Abramoff friend Rabbi Daniel Lapin. In January 2000, when [Ralph] Reed sent Abramoff an $867,000 invoice to be billed to a Choctaw official, Abramoff responded: "Ok, thanks. Please get me the groups we are using, since I want to give this to her all at once." Reed responded: "Amy, Grover, Lapin and one other I will get you."

Talk about restoring honor! Later in the rally, Beck featured the Rev. John Hagee, the bigoted right-wing minister who called Hurricane Katrina "the judgment of God against the city of New Orleans" because the city hosted a gay pride parade. What a way to commemorate the fifth anniversary of that tragedy. Hagee also called Catholicism "the great whore" and said all Muslims "have a scriptural mandate to kill Christians and Jews." Poor John McCain welcomed Hagee's endorsement in 2008, only to have to reject it as more of his hateful proselytizing came to light. I certainly hope the Catholic League's Bill Donohue, who bashed Hagee in 2008 and called on McCain to reject his backing, will denounce Beck and Palin as well now.

Speaking of McCain, Sunday is the second anniversary of his greatest accomplishment, making Sarah Palin a national figure. How did Palin do Saturday at Beck's big party? Well, the two preening GOP titans seem to disagree about big issues. Where Beck described his rally as "the beginning of the great awakening in America" and said Friday night, "This is going to change everything," Palin rejected those who want to "fundamentally transform America." Who's telling the truth? Of course Palin wasn't just contradicting Beck but violating the alleged non-political spirit of his event by attacking President Obama with everything but his name; she has repeatedly chided Obama for saying his campaign was about "fundamentally transforming" the country. She's so sly.

As Mark Benjamin reports, nothing terribly interesting went on at the Beck event. That's at least partly thanks to everyone who rose up to denounce it, and forced Beck to revise his plans, and make the day about honoring the military and religion and avoiding politics. Organizers asked attendees not to bring signs, so they wore T-shirts instead, and you can judge whether politics was involved, thanks to Think Progress. Beck got goofy talking about how he related to King because "we haven't carved him in marble yet. He's still a man."

But let's remember, also thanks to Media Matters, all of Beck's self-important delusional pronouncements when he was trying to compare his cause to Dr. King's:

In March, after healthcare reform passed, he told his radio audience:

"[W]hile Martin Luther King had to face German Shepherds, we have to face SEIU and leftist thugs. That's okay, we will continue to stand. We will continue to march forward. We will not pick up a weapon because our greatest weapon will be God." Beck also stated, "You may destroy me, but you will have to kill me to stop me from speaking out."

"This is a moment, quite honestly, that I think we reclaim the civil rights movement. It has been so distorted and so turned upside down because we must repair honor and integrity first, I tell you right now. We are on the right side of history. We are on the side of individual freedoms and liberties, and damn it, we will reclaim the civil rights moment. We will take that movement because we were the people that did it in the first place."

"We were the people that did it in the first place." Yes, that's a quote. So when the predictable mainstream media voices say, hey, Beck wasn't so bad, remember that's because he was caught before he could be.