In the wake of Columbine, many educators have instituted zero-tolerance discipline. What is it teaching our kids? 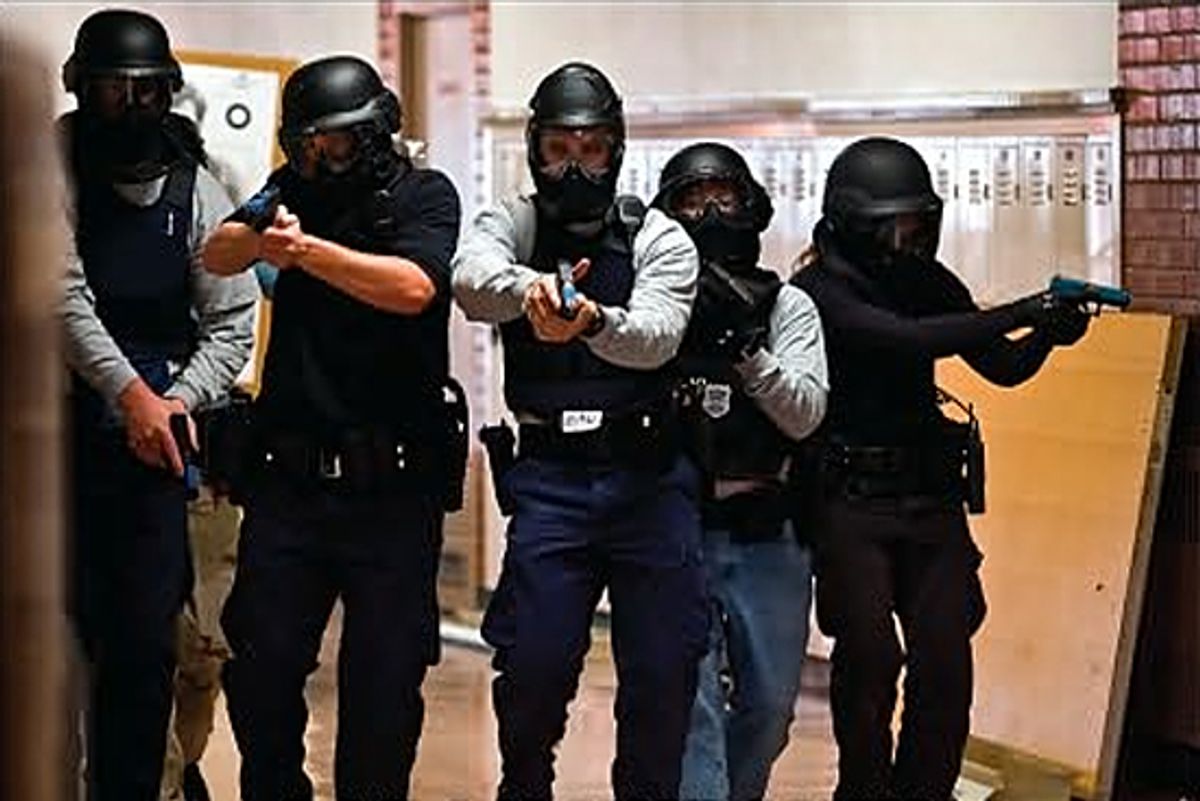 Detail from the cover of Homeroom Security
--

Last fall, a Delaware student was suspended from school after bringing a knife into his classroom. Because of his school's zero-tolerance weapons policy, he was suspended for 45 days and forced to attend an alternative school. Swift justice? Perhaps -- except that the student, Zachary Christie, was a first grader at the time and the "weapon" was his Cub Scout-issued fork-spoon-knife tool. When his case received national attention, his punishment and the school's policy were swiftly revised -- part of the growing groundswell of opposition to zero tolerance.

Although opponents point to this case and others as evidence that "one size fits all" punishments are ineffective, anxiety about weapons and violence in schools remains high among Americans. In the wake of the 1999 shootings at Columbine High School, high schools in the United States rushed to adopt strict policies and filled schools with armed guards, metal detectors and drug-sniffing dogs. These are now hallmarks of the modern American school. Yet for all these extreme measures, public fears over student safety remain high.

Aaron Kupchik's "Homeroom Security: School Discipline in an Age of Fear" is an attempt to explain that paradox and suggest an alternative to this battle-zone mentality. The product of two years of research, "Homeroom" examines four public high schools comprising different race and class demographics. Kupchik compiled more than a hundred hours of interviews with students, administrators, teachers and police officers assigned to each school. Kupchik's writing is meticulous and even-handed, even praising the officers whose methods he strongly disagrees with.

Salon talked with Kupchik about the lessons of Columbine, his willingness to appear naive, and hopeful signs for the future.

How did these zero-tolerance policies get started and what do they mean?

They started in the '90s, and they were spurred by the federal government's Safe and Drug Free Schools Act, which required schools to implement zero tolerance for certain things like weapons. What schools have done across the country in the last 15 years is to expand greatly what falls under zero-tolerance policies. So they extend to not just deadly weapons and drugs but sometimes fighting and prescription drugs and other types of substances. What they mean is that if you're caught violating this broad rule, there's no discussion and no elaboration of why you did this. No investigation. We just punish you with the one-size-fits-all punishment.

Why are they so detrimental?

We're teaching kids what it means to be a citizen in our country. And what I fear we're doing is teaching them that what it means to be an American is that you accept authority without question and that you have absolutely no rights to question punishment. It's very Big Brother-ish in a way. Kids are being taught that you should expect to be drug tested if you want to participate in an organization, that walking past a police officer every day and being constantly under the gaze of a security camera is normal. And my concern is that these children are going to grow up and be less critical and thoughtful of these sorts of mechanisms. And so the types of political discussions we have now, like for example, whether or not wiretapping is OK, these might not happen in 10 years.

So these policies are giving the kids a civics lesson.

Exactly. As part of my research, I interviewed students, and one of the questions that seemed like a good idea at the start was asking them whether they liked having the SROs [school resource officers] in their schools. For me, having gone to public schools without cops, this really seemed odd to me, to put police officers in peaceful schools. And the students were puzzled by this question, and I quickly realized that it makes no sense to them because it's all they've ever known. It's completely normal. It makes about as much sense as if you asked them, "Should your school have a principal?"

You spent a lot of time in each of the four schools. What are the police officers like who patrol these schools?

They were great. I really enjoyed the time that I spent with them. These are people who care about kids and who work hard for little money to do the right thing. I might disagree with what they do and how they do it, but not with their motives. But their role is an odd one for schools. They don't have a counseling background, and they are just not able to deal with kids' problems the way that some of these problems need. Their day-to-day experience trains them and socializes them to deal with kids in not the most productive manner. And their presence in schools creates a law-and-order mindset to govern schools rather than the type of counseling and democratic mindset that we know prevents crime.

There's still very much a public perception that crime, violence and drugs are on the rise in schools. Has the addition of school resource officers been effective at all?

The jury's still out on whether they've led to a decrease in crime. There have been big decreases in crime, but it's unlikely that the SROs have had an effect on that. There have been only a few studies that have tried to look at effectiveness, and they've been totally mixed. What we do know about preventing crime in schools is that when you have a more democratic and inclusive school, you tend to have less crime. A democratic and inclusive school is one where students feel respected, they feel like they're a part of a school, and where a school deals with students' problems rather than just dismissing them. It's one where the students feel empowered. SROs and zero-tolerance policies do the opposite of this; they erode what we know works.

The Columbine shooting is often invoked as a justification for zero-tolerance policies. But what kinds of changes did Columbine High adopt in the wake of the shootings?

Columbine is central to the way we think about school security. It redefined the tragedy of school crime in a very dramatic way. In the wake of it, what Columbine High did was quite sensible. They invested in counselors. They recognized that kids who do bad things in school are usually kids who have very serious troubles, and so rather than simply kicking them out of school for a week, they tried to reach out to kids who are dealing with difficult issues -- to solve problems rather than just delaying them for a week while the kid's out of school. They turned away from the more zero-tolerance type of policies and toward what I think is a much more effective way of trying to deal with things.

That's pretty surprising. If there's any school where you thought things might become more draconian, it would be that one.

It's also interesting that one of the ways that people try to prevent a "Columbine-like incident," a phrase I heard frequently, is to put up surveillance cameras and put in SROs. But they had both of those at Columbine. We can watch the surveillance footage of the police officers. Now perhaps it would have been even more devastating if they had not been there; we'll never know that. But it certainly didn't prevent things from happening.

One of your proposed reforms is to place non-school-affiliated counselors in schools. Why?

There are good features of having cops in schools. On the balance sheet, I think it is more harmful than beneficial, but one of the good things is that there is somebody outside the school's authority that kids can talk to. But why does that person have to be a police officer? Why can't that person be someone who's trained in adolescent development? Someone who has a good eye for what makes adolescents tick and can deal with their problems as they arise? Why can't be they be someone who can better hold their confidence unless their life or safety is at stake? This could be kind of the best of both worlds.

Some would say these ideas are too naive for the harsh realities of the modern high school.

That might be true. But they've tried their policies, and there are very clear disadvantages. What I'm arguing against is near-universal in American public high schools. There are harmful consequences which I try to detail throughout the book. I acknowledge I don't have to deal with 30 unruly kids as I teach in front of a class. So I have great sympathy for teachers who have to struggle with that misbehavior. That's not their fault. But what I'm saying is that we have evidence-based ways of dealing with that misbehavior that are much more likely to stop it, and we don't use them. So I might be naive, but I'm willing to be, because I see a lot of harm with the current policies.

With a new school year starting, do you see any hope for a shift away from these methods?

In my own state of Delaware, I recently took part in a task force in the state Legislature that led to new legislation that was passed to reduce suspensions and arrests in schools -- to curb zero-tolerance polices. So I do see movement in the positive direction. Another encouraging sign is that I'm talking to you and that people are interested in this. We need to be firm. There needs to be discipline in schools, but we must be much more sensible about how we do it. It seems to me that more and more people are catching on to that, so I am hopeful that things will change.

Justin Sullivan is an editorial intern at Salon.