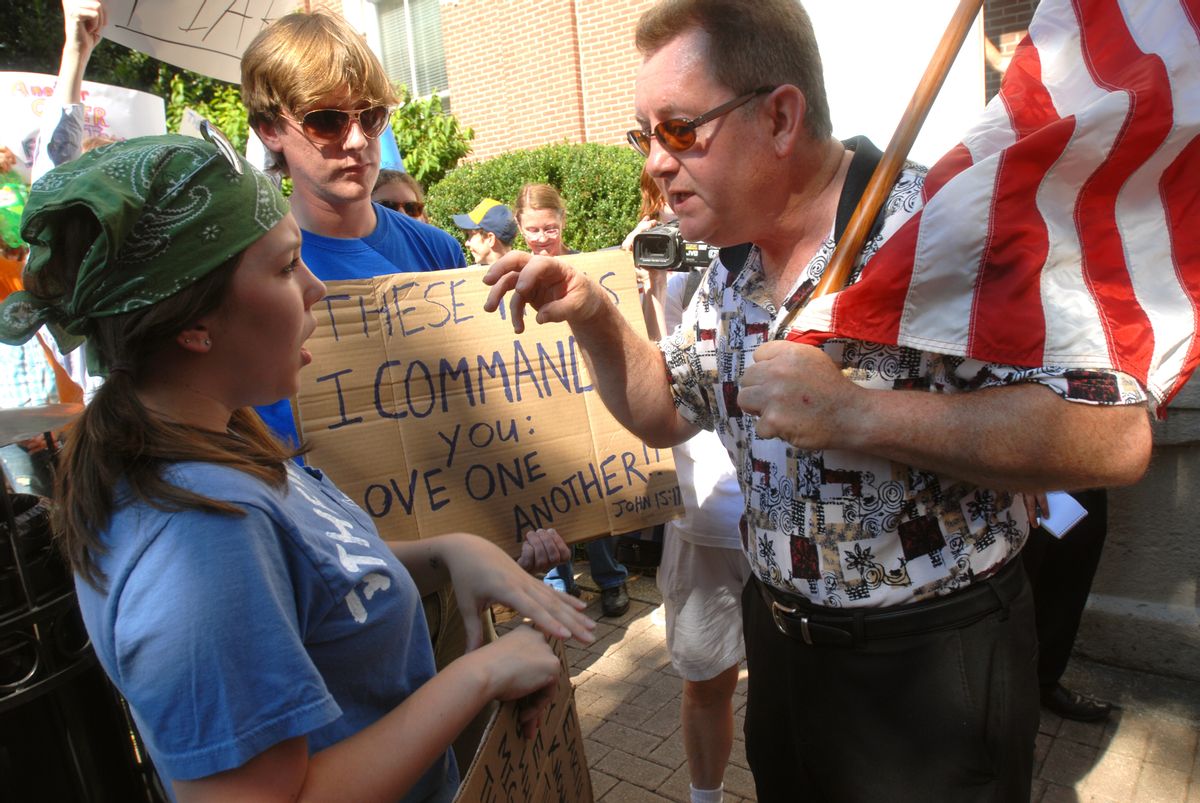 Protester Greg Johnson, right, and counter protesters Ina Marshall and Tim Foster, left, argue during demonstration against a planned mosque and Islamic community center on Wednesday, July 14, 2010 in front of the Rutherford County Courthouse in Murfreesboro, Tenn. Those opposing the mosque circulated a petition asking the county commission to rescind approval of the facility. (AP Photo/Christopher Berkey) (Christopher Berkey)
--

One of the most under-reported political stories is the increasingly vehement, nationwide movement -- far from Ground Zero -- to oppose new mosques and Islamic community centers.  These ugly campaigns are found across the country, in every region, and extend far beyond the warped extremists who are doing things such as sponsoring "Burn a Quran Day."  And now, from CBS News last night, we have this:

Federal officials are investigating a fire that started overnight at the site of a new Islamic center in a Nashville suburb.

Ben Goodwin of the Rutherford County Sheriff's Department confirmed to CBS Affiliate WTVF that the fire, which burned construction equipment at the future site of the Islamic Center of Murfreesboro, is being ruled as arson. . . .

The chair of the center's planning committee, Essim Fathy, said he drove to the site at around 5:30 a.m. Saturday morning after he was contacted by the sheriff's department.

"Our people and community are so worried of what else can happen," said Fathy. "They are so scared" . . .

Opponents of a new Islamic center say they believe the mosque will be more than a place of prayer; they are afraid the 15-acre site that was once farmland will be turned into a terrorist training ground for Muslim militants bent on overthrowing the U.S. government.

"They are not a religion. They are a political, militaristic group," Bob Shelton, a 76-year-old retiree who lives in the area, told The Associated Press.

Shelton was among several hundred demonstrators who recently wore "Vote for Jesus" T-shirts and carried signs that said "No Sharia law for USA!," referring to the Islamic code of law.

Others took their opposition further, spray painting a sign announcing the "Future site of the Islamic Center of Murfreesboro" and tearing it up.

At one such prayer vigil, WTVF reported opponents speaking out against construction.

"No mosque in Murfreesboro. I don't want it. I don't want them here," Evy Summers said to WTVF. "Go start their own country overseas somewhere. This is a Christian country. It was based on Christianity."

The arsonists undoubtedly will be happy to tell you how much they hate Terrorism.  And how there's a War on Christianity underway in the U.S.  The harm from these actions are not merely the physical damage they cause, but also the well-grounded fear it imposes on a minority of the American population.  If you launch a nationwide, anti-Islamic campaign in Lower Manhattan based on the toxic premise that Muslims generally are responsible for 9/11 -- and spend a decade expanding American wars on one Muslim country after the next -- this is the inevitable, and obviously dangerous, outcome.

Three other items worth noting:

(1) Kudos to The New York Times for publishing this Op-Ed by Palestinian-American journalist Ali Abunimah, with views on the Israeli/Palestinian conflict -- and the role played by the U.S. -- which are typically excluded from the American debate on those issues.

(2) Reflecting the fact that primitive fundamentalism is found in all religions and is by no means unique to Islam, this Jerusalem Post article details how an Israel singer was sentenced by a rabbinical panel to receive 39 lashes for the crime of singing in front of an audience mixed with men and women.  That article rather substantially exaggerates the punishment -- the video reflects that the "lashes" were essentially symbolic and undertaken voluntarily, fundamentally distinguishing it from involuntary, genuine punishment for moral "sins" -- but the notion that such an act merits punishment is nonetheless instructive.

(3) This short though important post documents how children are being trained to give up all privacy, and to be good, dutiful Surveillance State citizens, through constant, pervasive surveillance in schools.   As I wrote recently here, what is lost from the societal elimination of privacy is difficult to describe but of incomparable value:

Many people are indifferent to the disappearance of privacy -- even with regard to government officials -- because they don't perceive any real value to it. The ways in which the loss of privacy destroys a society are somewhat abstract and difficult to articulate, though very real. A society in which people know they are constantly being monitored is one that breeds conformism and submission, and which squashes innovation, deviation, and real dissent.

The old cliché is often mocked though basically true: there's no reason to worry about surveillance if you have nothing to hide. That mindset creates the incentive to be as compliant and inconspicuous as possible: those who think that way decide it's in their best interests to provide authorities with as little reason as possible to care about them. That's accomplished by never stepping out of line. Those willing to live their lives that way will be indifferent to the loss of privacy because they feel that they lose nothing from it. Above all else, that's what a Surveillance State does: it breeds fear of doing anything out of the ordinary by creating a class of meek citizens who know they are being constantly watched.

Training children from an early age to have no expectation of privacy -- to live on the assumption that their every move and even thought (which is what Internet activity is) will be monitored and recorded by authority figures -- exacerbates these harms quite substantially.

UPDATE:  As The Nashville Scene reported, Tennessee Lt. Gov. Ron Ramsey -- during his Tea-Party-endorsed, unsuccessful bid to become the GOP nominee for Governor -- had this exchange with a citizen last month who was attending one of his campaign events (begins at 3:10 of the video below; h/t Gawker):

Q.  A point of national concern -- and it is in my mind and my heart -- and that's more of a national threat coming to the State of Tennessee -- we have a threat invading our country from Muslims.

Now, you know, I'm all about freedom of religion. I value the First Amendment as much as I value the Second Amendment as much as I value the Tenth Amendment and on and on and on.  But you cross the line when they starting trying to start bringing Sharia Law here to the State of Tennessee -- to the United States.  We live under our Constitution and they live under our Constitution.  But it's scary . . . . nobody asked me about this on the Governor's race until this mosque started coming up there.  I've been trying to learn about Sharia Law, and it is not good if that's what's going on.

You could even argue whether being a Muslim is actually a religion or is it a nationality, way of life or cult, whatever you want to call it. . . . That's become an issue, but I've read enough about Sharia Law to know it's crazy.

The gentleman who asked the question then went on to assert that 22 communities in the U.S. now live under Sharia Law, and -- he warned -- "it's expanding rapidly."

Until this investigation is completed, it will be uncertain who started this fire or why, but one thing is perfectly clear:  the attitudes in this video are as pervasive as they are pernicious, and if anything is "spreading rapidly," it's this.