The Emmys' most memorable moments 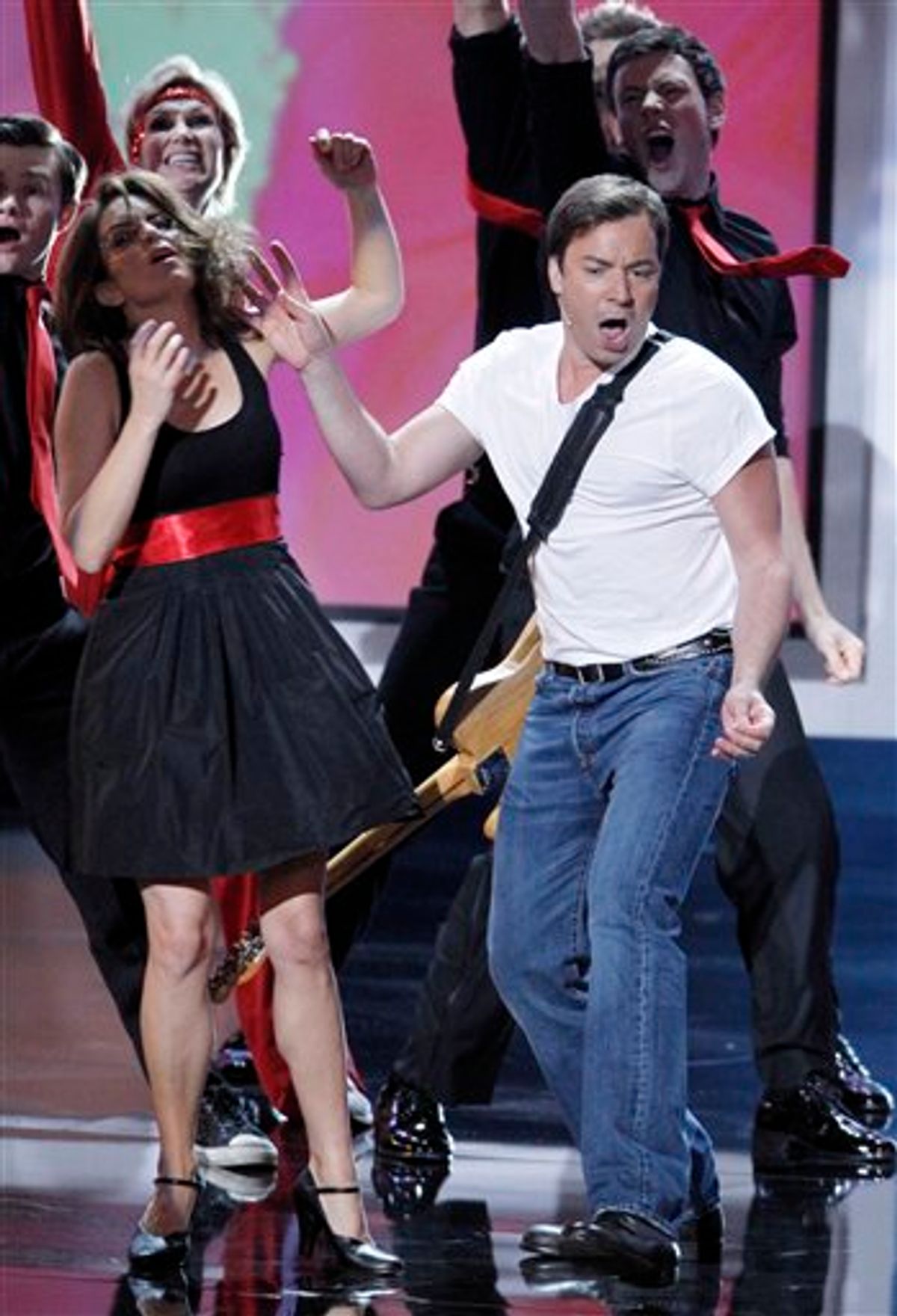 The Oscars have arguably bigger stars, and the Golden Globes have an international je ne sais quois. But the Emmys, well, where else are you going to get Kim Kardashian, Jewel and Jack Kevorkian together in the same room? Saaayyyy….

Therein lies the difference. Television's not just about splashy epics or big names. It's our channel surfing-friendly, attention deficit disordered pal. It's what we are quite possibly eating our dinner in front of tonight. In our underwear. And while we always feel an intimate bond with our favorite shows, has there been an Emmys in recent years in which we've had so many contenders to care about? Far from the "Gee, maybe 'West Wing' will sweep up everything, again" mood of years past, this year's spectacle promised fierce competition among a bevy of obsessively loved fan favorites. The stakes were as high as the Losties and the Gleeks and the I'm With Coco crowd could take them.

And with a bubbly new host, Jimmy Fallon, at the helm, there were times Sunday's show actually did provide real competition and surprise. Hello, Aaron Paul! Ditto, Archie Panjabi! There were also plenty of yawn-worthy speeches read haltingly off crumpled papers, horribly stilted banter, and much too little showcasing of the nominated programs and performances. (Note to producers: Very few people give a hoot about hearing what Hollywood scribes wanted to be when they were kids. But clips? Everyone loves clips.) In the end, thanks either to their spontaneity, wit or just godawfulness, there were nevertheless a few moments during the 62nd Primetime Emmys to make us glad we still watch television. Here are the top 10:

10. The inevitable pre-taped opening musical number that segues into a live musical number this time featured Fallon leading the cast of "Glee" and a ragtag crew of such disparate television luminaries as Tina Fey, Jorge Garcia, Betty White, Kate Gosselin, Tim Gunn and the always-up-for-anything Jon Hamm in a rendition of "Born to Run" that substituted the Boss's "Wendy" for "Emmy." It was the kind of desperately boisterous, "Are we having fun yet?" performance rarely viewed outside of corporate team-building exercises. If only Springsteen were dead, so he could roll over in his grave.

9. Amy Poehler, who gave birth a mere three weeks ago, your rack is awesome.

8. The only person on television whose fan club rivals that of Betty White, Jane Lynch was a delight accepting a supporting award for her gloriously loathsome role as Sue Sylvester on "Glee." Thanking her parents for being so "unintentionally hilarious" and noting, "I'm not Buddhist but they do seem like a very calm people," the recently married actress went on to extend gratitude to her wife and stepdaughter. She was funny, sincere and real -- and proved she can rock an evening gown as effectively as a tracksuit.

7. John Hodgman, attaining perfection in a return stint as the evening's retro-droll color commentator, was the John Chancellor of weird. His shining moment? We loved his observation that Jon Stewart couldn't be there when "The Daily Show" won its umpteenth award because he was "too busy resting in his bed of melted Emmys," but we give top props for when "Big Bang Theory's" Jim Parsons beat out the likes of Steve Carell and Alec Baldwin for his first Emmy win. His walk up to the stage was accompanied by Hodgman's announcement that "Nerds across America are taking to the streets in joy, setting cars on fire and then backing away, using their inhalers."

6. Nominee and presenter January Jones, giving the fashion pundits something to talk about in the world's most unfortunate dress and sloppy hair, seemed determined to prove her stilted, personality-free "Saturday Night Live" performance last season was no fluke. It's official: Our love for Betty Draper carries over to the woman who portrays her not in the slightest.

5. George Clooney, receiving the Bob Hope Humanitarian Award from his "ER" costar Juliana Margulies, responded to the inevitable standing ovation with an, "Aw, don't do that, because then I feel like maybe I'm sick and I don't know it." It's no feat to deflect attention from yourself when you look that good, but Clooney brought zero ego to the podium. "It's important to remember how much good can get done," he said, imploring us to "Keep the spotlight burning on heartbreaking situations that keep being heartbreaking long after the cameras have gone home" and proving once again that he may be the coolest ridiculously handsome person on the planet.

4. Ricky Gervais, you liven up any party. Lamenting the lack of alcohol at the show, he noted with his trademark impeccable-to-the-point-of-painful comic timing, "Russell Crowe -- he would not be seen dead here ... Mel Gibson? Come on." As the crowd shivered uncomfortably, he continued, "I'm not going to have a go at him. He's been through a lot ... Not as much as the Jews." And with that, a team of waiters appeared to provide bottles of beer to the crowd. "Those are on me," he declared, "'The Office' is in syndication."

And then, like a little gift from heaven itself, it turned out one of the nominees in the category Gervais was presenting was Olympic opening ceremonies director Bucky Gunts. "I hope it's Bucky Gunts," he tittered naughtily before opening the envelope, "because I didn't know you could say that on television. And let's face it, we're all Bucky Gunts here." The winner? Bucky Gunts. Dreams do come true, America!

3. "Temple Grandin" costar winner Julia Ormond, taking the supporting actress gold along with the James Cameron "I'm up here to make no sense whatsoever" prize to boot, started her speech with a cute, "I told my mum I was emanated for a nommy." She then proceeded to ramble, gush and toss around a mop of hair that looked like it just got back from a week at Burning Man. Had Ormond overzealously taken up Gervais on the free beer thing? Unlikely, since Alexander Skarsgard later groused the brewskis were non-alcoholic.  Perhaps she was simply a woman so drastically unaccustomed to winning awards she didn't know how to behave when she got one in her hand. Did she really say something about "it takes a village to make a child," semi-jokingly stumble over costar Catherine O'Hara's name, and refer to her project as "a chick flick with bull's balls"? All that and more. Rarely does one performer cram that much fruit bat into two minutes of podium time.

2. Host Fallon, in a white tux, introduced Tom Selleck, to the strains of the "Magnum, P.I." theme, as his "real father." Cue identically tuxed Selleck, awkward hugging, and Selleck's bemused shrugging off of his alleged long-lost progeny. Who cares that he was really there to give another damn best drama award to "Mad Men"?

1. After sweeping several earlier categories, "Temple Grandin's" big win for best made-for-television movie wasn't exactly an upset, but the sincerity of the moment was not to be denied. Emily Gerson Saines spoke tearfully not just as the movie's producer but "a parent of a child with autism." Her words then prompted a jumbo-size hug from the real Grandin, who in turn called upon her own mother in the audience to stand up. In an evening when so many winners gratefully acknowledged their parents, a night when top comedy honors went to the hilarious, frequently tender "Modern Family," could there have been a sweeter moment, a lovelier acknowledgment of the sustaining power of both parents and children to not merely support our creativity, but ultimately, to inspire it?