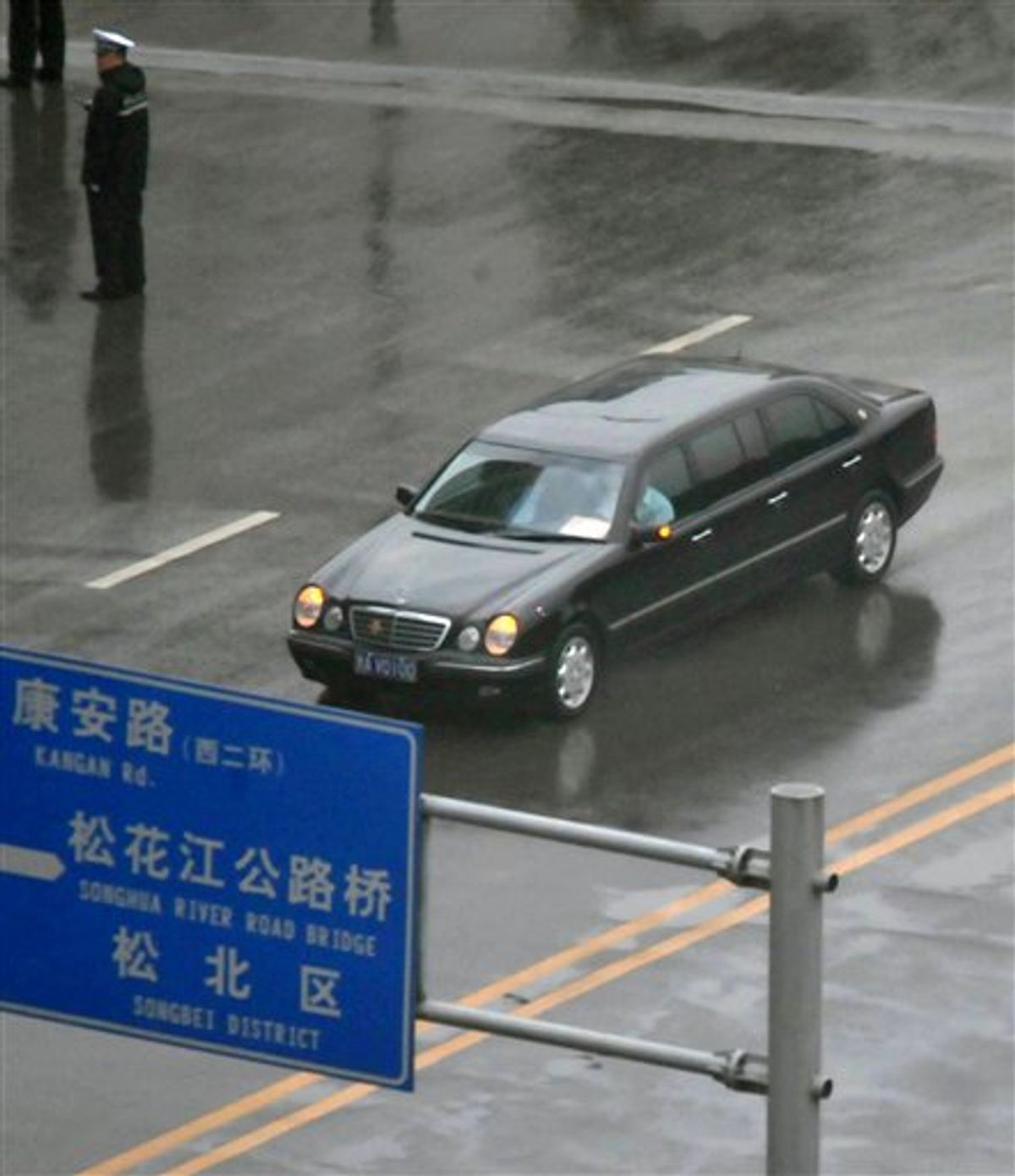 A limousine, that Japan's Kyodo News said is believed to be carrying North Korean leader Kim Jong Il, drives through a street in Harbin, northeastern China, Sunday, Aug. 29, 2010. Kim visited Harbin on Sunday while on a secretive trip reportedly aimed at drumming up support for a succession plan involving his youngest son, a news report said. (AP Photo/Kyodo News) ** JAPAN OUT, MANDATORY CREDIT, FOR COMMERCIAL USE ONLY IN NORTH AMERICA ** (AP)
--

China and North Korea confirmed Monday that their leaders met while the Kim Jong Il was on a secretive trip to his northern neighbor, apparently to seek aid and drum up support for a succession plan.

Though the visit was widely reported on using anonymous officials and relying on spotting of the North Korean dictator's train and motorcade, simultaneous dispatches from both countries' state media were the first official confirmation. They also likely signaled the trip was over. Neither country has in the past not acknowledged Kim's visits until he has returned home.

China Central Television reported on its main evening broadcast that Kim met President Hu Jintao on Friday in the northeast city of Changchun. North Korean state media issued a report at the same time confirming the trip and published a speech Kim gave in Hu's presence.

Neither of the two, as well as foreign diplomats in Beijing who were briefed separately on the visit, mentioned of Kim's son, Kim Jong Un, amid fervent speculation that the ailing leader is grooming his youngest son to take over power of the world's last hardline communist state.

Officials from the International Liaison Department, the Communist Party office which handles China's relations with North Korea, separately briefed senior diplomats from Japan, Russia, South Korea and the United States about Kim's visit. The officials did not say whether Kim had brought his son and heir-apparent, but said the visit was previously arranged and largely focused on the economy, said Asian and Western diplomats.

The official Xinhua News Agency said Kim told Hu he hoped for an early resumption of six-nation talks to ease tensions on the Korean peninsula. It did not give any details. North Korea walked away from the nuclear disarmament talks last year in protest at an international condemnation of a long-range rocket launch. Prospects for restarting the talks were put into doubt with the sinking of a South Korean warship in March.

Many North Korea watchers predict the son will be appointed to a key party position at a ruling Workers' Party meeting early next month -- the first such gathering in decades -- as part of a succession process. North Korea would need Chinese aid to pull off such an event.