Don wins then loses, Roger reminisces then unravels, and Peggy and Pete score in overtime 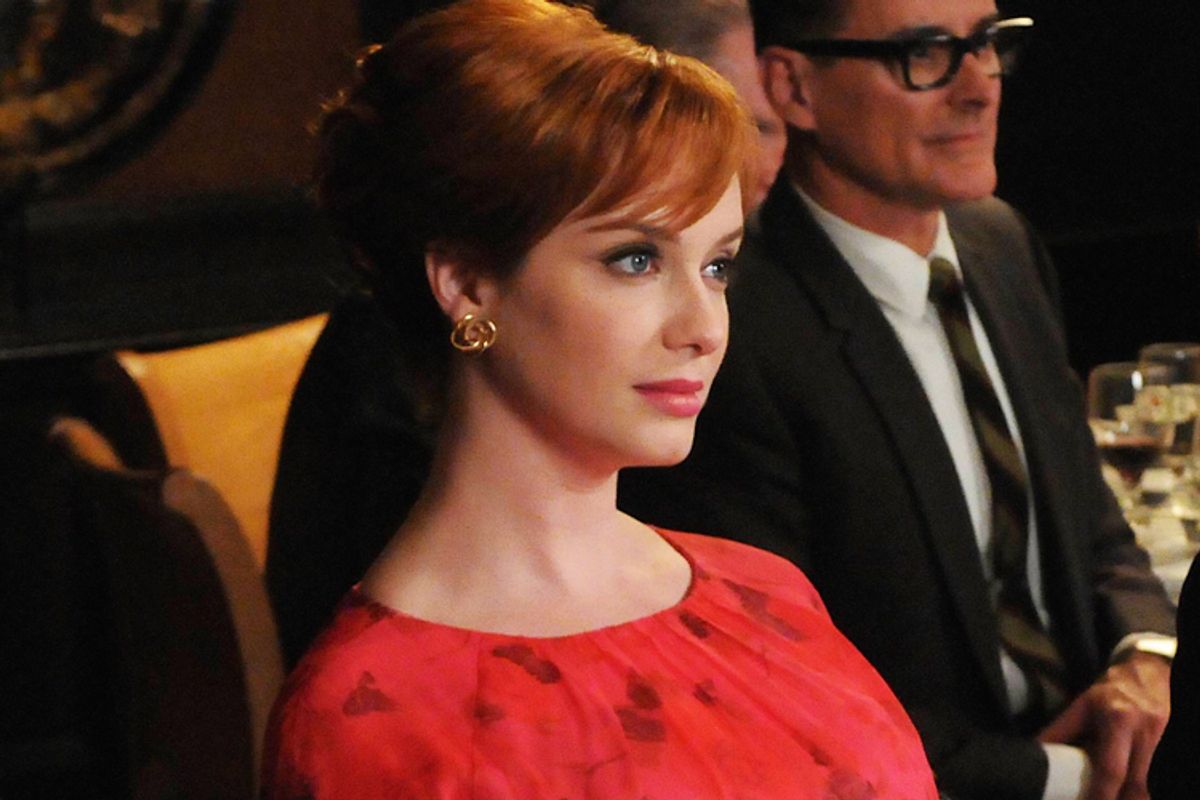 What a night! "Mad Men" wins the Emmy for outstanding drama, Don Draper wins the Clio for his Glo Coat campaign, and Peggy wins a major victory against dismissive art director Stan Rizzo -- which inspires him to bestow upon her the "prize for smuggest bitch in the world."

But Matthew Weiner might deserve that prize for crafting a whole episode around the Clio awards and the arbitrary nature of success to run on Emmy night. "You finish something, you find out everyone loves it right around the time that it feels like someone else did it," Don says of his nomination for a Clio, foreshadowing his subsequent out-of-body experience. First Don wins, then he doesn't share credit with anyone else but treats it as his personal victory, then he talks about his win like it doesn't matter to him either way when obviously it does, and finally he celebrates by pacing himself badly and entering blackout mode (after smugly chuckling at Duck Phillips in a similar state). Gee, I hope Matthew Weiner had a good Emmy night.

Smug timing or not, it's fitting that "Waldorf Stories" would offer such a layered rumination on the nature of work and success in America, from Danny the aspiring copywriter's blind ambition to the flashbacks of Don relentlessly pursuing Roger for a job. Don goes from scoffing at Danny's revelation that half of his book consists of ads he admires but didn't create to drunkenly stealing Danny's terrible "cure for the common X" phrase when pitching to executives from Life cereal. "Aspiration is as good as perspiration," Danny tells Don, but then we see just how much aspiration -- and arbitrary luck -- went into Don's success.

I love that Roger and Don start out the episode as a team, laughing at Danny's bumbling, naive behavior. "I told him to be himself. That was pretty mean, I guess!" Roger tells Don, and both men laugh heartily. But both have constructed perilous worlds that depend on them never being themselves: Roger is forced to play along with his wife Jane's arbitrary requests or face more "personal gift expenditures" when he really longs to have some meaningful accomplishment in his life and to have Joan back. But nothing Roger does is in line with his principles. "Hardy is so mean to Laurel. I hated that," he tells his secretary, but then we flash back to Roger being mean to Don when Don desperately wants to work for him.

How times have changed since then, Roger seems to think as he watches Don basking in the glory of his success at the after-party. "They don't seem to give awards for what I do," Roger tells Joan as they sit together at the bar. "And what is that?" asks Joan. "Find guys like him," Roger answers -- but even that is revealed as a farce, since Roger was drunk when he hired Don, and he didn't even remember he'd done it until Don showed up for work the next day. Roger's finest accomplishment was just a random mistake.

Meanwhile, Don, who never gives any credit to Peggy for the Glo Coat win and then thoughtlessly steals Danny's terrible slogan as well, tries to play the indifferent victor but fails. One of the sharpest exchanges of the night comes when Faye congratulates Don on his win.

Faye: Just think of how you'd feel right now if you lost.

Don: About the same, I suppose. It doesn't make the work any better.

Don: Whatever that means.

Faye: Is that right?

Don: What do you say we get out of here and really celebrate?

Faye: I think you're confusing a lot of things at once right now. I'm very happy for you.

Faye can see through Don and his consistent ability to pick all of the right answers on the test -- whether he's pretending to have healthy ego needs around a psychologist or pretending to care about the quality of the work that he does (or who actually did the work) at an awards celebration. "You're still Don Draper," Faye says, meaning that he's still just a cipher who says the right thing no matter how he feels. "Whatever that means," Don responds, suggesting not just that he doesn't see himself clearly (an overarching theme of Season 4), but also that he doesn't know what it really means to be Don Draper.

"You're incredible," Faye responds, meaning you're a real piece of work. "You smell good," Don says, misunderstanding Faye and revealing that it all boils down to sex for him regardless.

Fitting, then, that Don ultimately goes to bed with a woman who lusts after Don Draper because he won an award, and then wakes up with a woman (the waitress Doris) who wants Dick Whitman. Remember Don's first words to Roger? "I can show you what's popular, and what's unique, and the only thing I ask is that you call me Don." But it makes sense that someone would be calling Don "Dick" eventually, given how terrible Don is at playing along with his own make-believe identity these days.

Peggy, on the other hand, demonstrates that hard work doesn't always pay off. After days of trying to collaborate productively with distracted art director Stan Rizzo, she's starting to lose her cool. Even though Peggy has proven her talent over and over again, everyone misreads the reasons for her success. Last week it was Don's former secretary, Allison, who assumed Peggy had slept with Don to get her current position. This week, Stan suggests that Peggy isn't nearly hot enough for Don, and her role as Don's little sidekick and ego-stroker is even more demeaning than a role as his personal whore would be. "I bet he takes you hunting and lets you carry the carcasses in your mouth," he tells her.

"Are you gonna work or just stare at pictures of women who can't stare back?" Peggy asks him as he gazes at a copy of Playboy for "inspiration." Stan insists that she's repressed, that looking at naked women inspires him, and that he would be a nudist if society would allow it. "I know you're ashamed of your body -- or you should be, at least," he says.

So Peggy takes her clothes off. "I can work like this, let's get liberated." Stan immediately gets turned on, can't concentrate, and is mortified by it. Peggy stares right at him, showing him how uncomfortable he'd be if all of those women in his magazines could actually stare back. Not only does Peggy prove Stan wrong in every single thing he's claimed (that she's unattractive and repressed; that real naked women are inspiring to him), but she beats him at his own game. Mostly, though, we learn that even hard workers have to cast aside the task at hand and get creative if they want to win. It's remarkable to witness how far Peggy has come from her days as a naive striver. Even when Don gets mean, which he seems to do all the time now, Peggy is starting to have the last word. By the end of the episode, in fact, it's Peggy dictating the terms to Don, telling him he must call Danny and figure out a way to clean up his mess in stealing the guy's idea.

Instead, since Danny doesn't want money but wants a job, Don hires him -- the start of just another arbitrary success story in the highly arbitrary world of advertising. Roger created Don and Don destroyed him by undermining his position at the firm. Will Danny destroy Don?

Or is Don already crashing and burning? "Life: The reason to get out of bed in the morning," Don pitches to the cereal executives, and then we watch him linger in bed for days, losing his track of time and his identity itself.

But we also get a mesmerizing glimpse at who might just take over this careening mess of a business: Pete Campbell. As awkward as Don is smooth, as hard working as Don is distracted, as focused on the bottom line as Don is focused on his own secretly needy ego, Pete is practical above all else. "I expect pragmatism from you. We share that," Lane Pryce tells Pete with almost a twinkle in his eye. So when Ken Cosgrove shows up at SCDP, Pete recognizes it as an opportunity to manipulate Pryce's affection and assert his place as top dog. With Roger turning "morose" (in Joan's assessment) and Don turning into Roger (increasingly cocky but also increasingly morose and out of touch), this place is going to need a new top dog soon.

But in deference to the dominance of "Mad Men" itself, let's close by reflecting on just how transfixing this fourth season of "Mad Men" has been so far. As political and arbitrary and empty as success can be, the writers of "Mad Men" richly deserve their Emmy win for creating a vivid show that's thematically tight, dramatically provocative, and downright clever week after week. So much talent and hard work and close attention to detail go into making this show as dark, imaginative and thoughtful as anything to appear on the small screen. Congratulations to everyone at "Mad Men" for a well-deserved victory.

Or, as Roger might say, "Be careful what you wish for, because you'll get it, and then people'll get jealous, and try to take it away from you."