Peter Lenz, 13, died racing on the track on Monday, struck by a 12-year-old. Parents: Wake up! 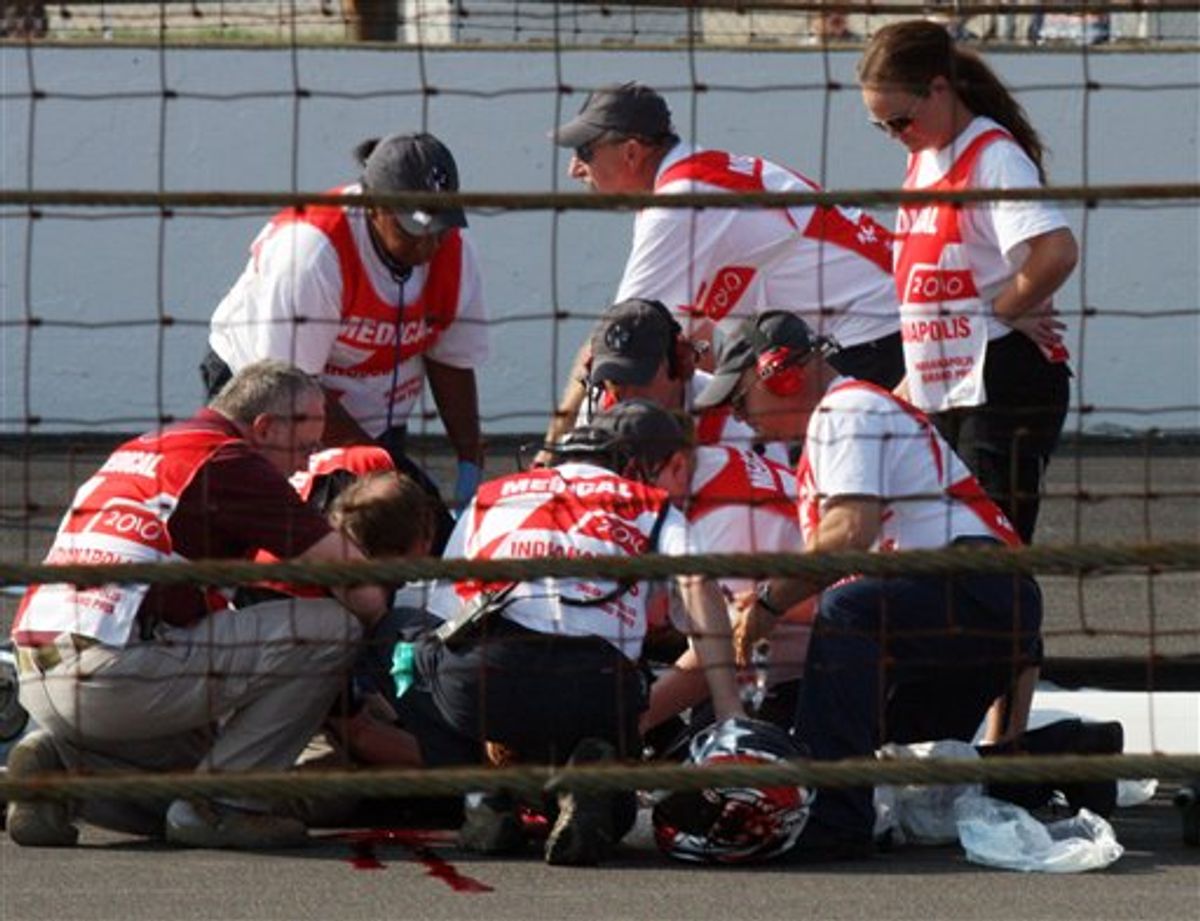 ** EDS NOTE GRAPHIC CONTENT ** Peter Lenz, of Vancouver, Wash., is treated by medical personnel after a crash Sunday, Aug. 29, 2010, in a motorcycle race that took place before the MotoGP event at Indianapolis Motor Speedway in Indianapolis, Sunday, Aug. 29, 2010. Lenz fell off his bike and was run over by another motorcycle. He was pronounced dead later Sunday. (AP Photo/Jimmy Dawson) (AP)
--

I’m sure by now you’ve all heard about the death of Peter Lenz, age 13, who was killed Sunday at Indianapolis Motor Speedway, during a warm-up lap of the Grand Prix National Championship for children 12-18.

I’m equally sure that you feel saddened and troubled by this event. It would be impossible to react any other way.

Here are a few additional facts that strike me as relevant:

I mention these facts not for the sake of initiating a debate with you about the morality of allowing your children to race motorcycles. There’s nothing to debate. This is an intervention.

I realize that a lot of you have somehow convinced yourselves that allowing your children to race before they are qualified to hold a license to drive is not only an inalienable right, but a wise use of your parental prerogative.

And, of course, advocates of this "sport" are full of the expected rationalizations. One told reporters: "As with any high-level sport, you need to start somewhere … Any parent who’s ever sent their kid to football camp or hockey camp will know that if you want to be at your peak performance, when you’re at your peak physical capabilities, you need to start quite young."

I would ask you to consider your reaction if a neighbor of yours announced that he was allowing his 12-year-old to play with toxic chemicals. "He’s going to be a scientist some day," this neighbor might say. "He’s got to learn how to handle this stuff some time!"

Or how about the cousin who sends his bat mitzvah girl off on a solo ascent of Mount McKinley? Hey, if she’s ever going to summit Everest, she needs to understand the effects of hypothermia, right?

As for the comparison to football or hockey camp, I’m pretty sure two blunt force traumas don’t make a right.

I’m not suggesting that kids can be kept safe from harm. On the contrary, they are the most vulnerable among us. Millions of children die of malnutrition and disease every year, for instance. Even amid our affluence, the perils are out there: loaded guns, drunk drivers, the bad luck of illness.

But it’s the basic job of parents the world over to make certain decisions on behalf of their children, precisely because children are not rational actors. They may be abstractly aware of the hazards around them, but they lack the moral imagination to fully comprehend death or serious injury.

As for the Lenz family, they have turned to their faith to cope with Peter’s death. "We are deeply saddened by the loss but know that Peter is racing even faster in the sky," read their statement to reporters.

His father added this note on his son’s Facebook page: "He passed doing what he loved and had his go-fast face on as he pulled onto the track … #45 is on another road we can only hope to reach."

Peter Lenz may never be able to face the fact that he placed his son’s childish desires above his own parental responsibility.

Let’s hope you are.