The high-finance boys can't stand being treated as "villains." Look in the mirror, people! 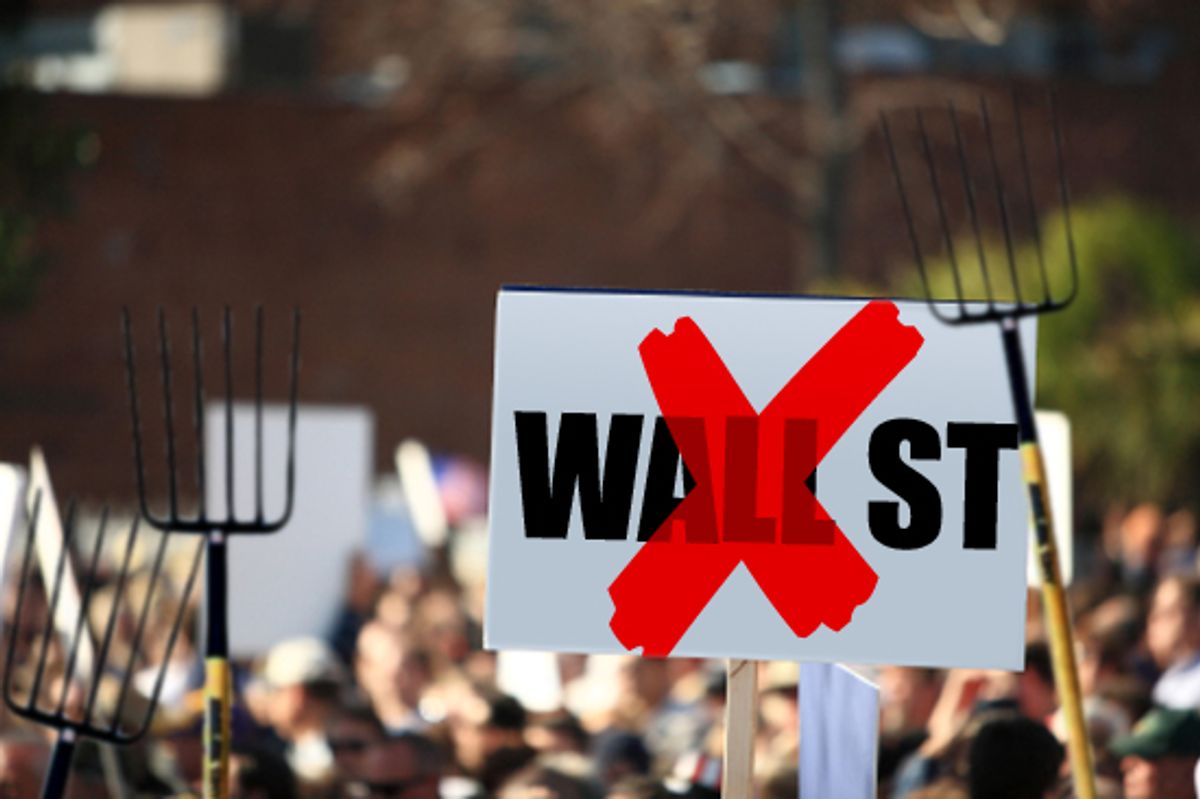 OK. We get it. Wall Street hates Obama.

As far back as last September, CNBCs Charlie Gasparino told us in the New York Post that "the top guys on Wall Street are feeling burned" by Obama's "wild-eyed redistribution of wealth and massive programs."

Just two weeks ago, one of Wall Street's richest private equity moguls, Steven Schwarzman, compared a plan to raise taxes on the wealthiest Americans to Hitler's invasion of Poland.

And now, today, the New York Times is prominently featuring a piece by Wall Street's most avid stenographer, Andrew Ross Sorkin, that purports to explain "Why Wall St. Is Deserting Obama." Once again, the problem is that Obama is trying to "regulate and redistribute our way back to prosperity" and this clearly, in the view of Wall Street's elite, is pure evil.

Wall Street, writes Sorkin, "did not realize was that they were going to be painted as villains. "

One popular way to respond to this increasingly popular theme is to note, despairingly, that the White House has bent over backward not to crush Wall Street under its jackbooted heel, despite the fact that such punitive behavior would please substantial portions of the populist right and left in this country. But How the World Works has been down that road before, and it is getting boring.

A more instructive approach -- albeit also high-blood-pressure-inducing -- would be to hie yourself over to ProPublica, and read the nonprofit investigative journalism outfit's latest piece of excellent reporting detailing exactly why Wall Street deserves to be "painted as villains."

In "Banks' Self-Dealing Super-Charged Financial Crisis," ProPublica's Jesse Eisinger and Jake Bernstein provide some of the most specific reporting yet showing how, even as the housing boom collapsed, Wall Street's biggest investment banks continued to furiously sell each other crappy mortgage-backed securities. No one who was paying any real attention wanted to buy collateralized debt obligations (CDOs) constructed out of imploding subprime mortgages, so the originators of the CDOS simply unloaded them on their co-conspirators. In the process, no economically useful service was performed, other than the enrichment of a small coterie of bond dealers and managers. The eventual damage caused, of course, was beyond enormous.

The incestuous trading also made the CDOs more intertwined and thus fragile, accelerating their decline in value that began in the fall of 2007 and deepened over the next year. Most are now worth pennies on the dollar. Nearly half of the nearly trillion dollars in losses to the global banking system came from CDOs, losses ultimately absorbed by taxpayers and investors around the world. The banks' troubles sent the world's economies into a tailspin from which they have yet to recover.

These jokers are annoyed at the prospect of wealth redistribution? What do they think they were doing over the last couple of decades, aside from sucking wealth out of the "real" economy and redistributing it to themselves. And now they are are upset about higher taxes? What they should really be nervous about is the prospect of 20 years in prison.