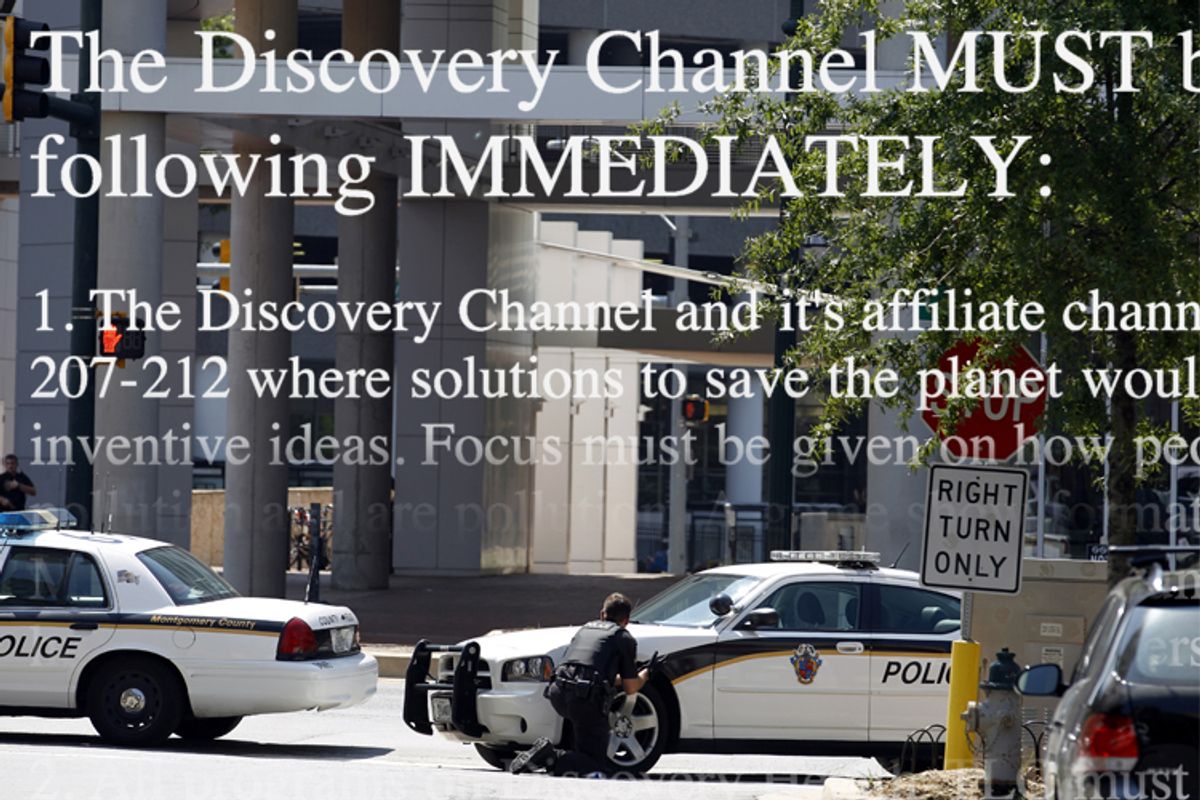 UPDATE 2: NBC News and other outlets are reporting that the suspect, James Lee, is dead.

UPDATE: At a news conference at about 5 p.m. EDT, Montgomery County Police Chief Thomas Manger said police had shot the suspect minutes before and that the man was in custody, though his condition was unclear. Manger also said three hostages were safe and out of the building, and that "suspected devices" in the building had not been rendered safe.

The man who is reportedly inside the Discovery Channel building in Maryland with a gun and an explosive device is suspected by police to be James J. Lee, whose unconfirmed Internet manifesto demands that Discovery run progamming based on the book "My Ishmael," that immigration be banned, global warming stopped, and civilization "exposed for the filth it is."

The unconfirmed demand list is above all preoccupied with the problem of overpopulation (read the complete manifesto here).

Here's how it begins:

1. The Discovery Channel and it's affiliate channels MUST have daily television programs at prime time slots based on Daniel Quinn's "My Ishmael" pages 207-212 where solutions to save the planet would be done in the same way as the Industrial Revolution was done, by people building on each other's inventive ideas. Focus must be given on how people can live WITHOUT giving birth to more filthy human children since those new additions continue pollution and are pollution. A game show format contest would be in order. Perhaps also forums of leading scientists who understand and agree with the Malthus-Darwin science and the problem of human overpopulation. Do both. Do all until something WORKS and the natural world starts improving and human civilization building STOPS and is reversed! MAKE IT INTERESTING SO PEOPLE WATCH AND APPLY SOLUTIONS!!!!

In form -- plain text on a blank website -- the message is reminiscent of the rambling online note left by Joe Stack, the man who flew a small plane into an IRS office in Austin earlier this year.

Unlike the Stack case, no injuries have been reported at the Discovery building (though there are reports of a shot fired).

Lee has been protesting the Discovery Channel for some time. The blog DCist reported in 2008:

As you can see, the singularly named "Lee," with his faux-tough mug shot and all-caps, is dishing out a little of the old insane rambling on the cable network to promote his "Save the Planet Protest Against the Discovery Channel," which the web site says is planned from 9 a.m. to 9 p.m. for the entire week of February 15—23, 2008:

The site also reported that Lee paid homeless people to join his protest at Discovery. He was also arrested at the time for disorderly conduct after allegedly throwing money into the air to attract attention to his cause.

What appears to be Lee's MySpace page says he is 43 and hails from Hawaii.