"How to Become a Scandal": Why America can't get enough scandal

Mel Gibson, Dr. Laura, Tiger Woods: What our fascination with public downfall really says about us 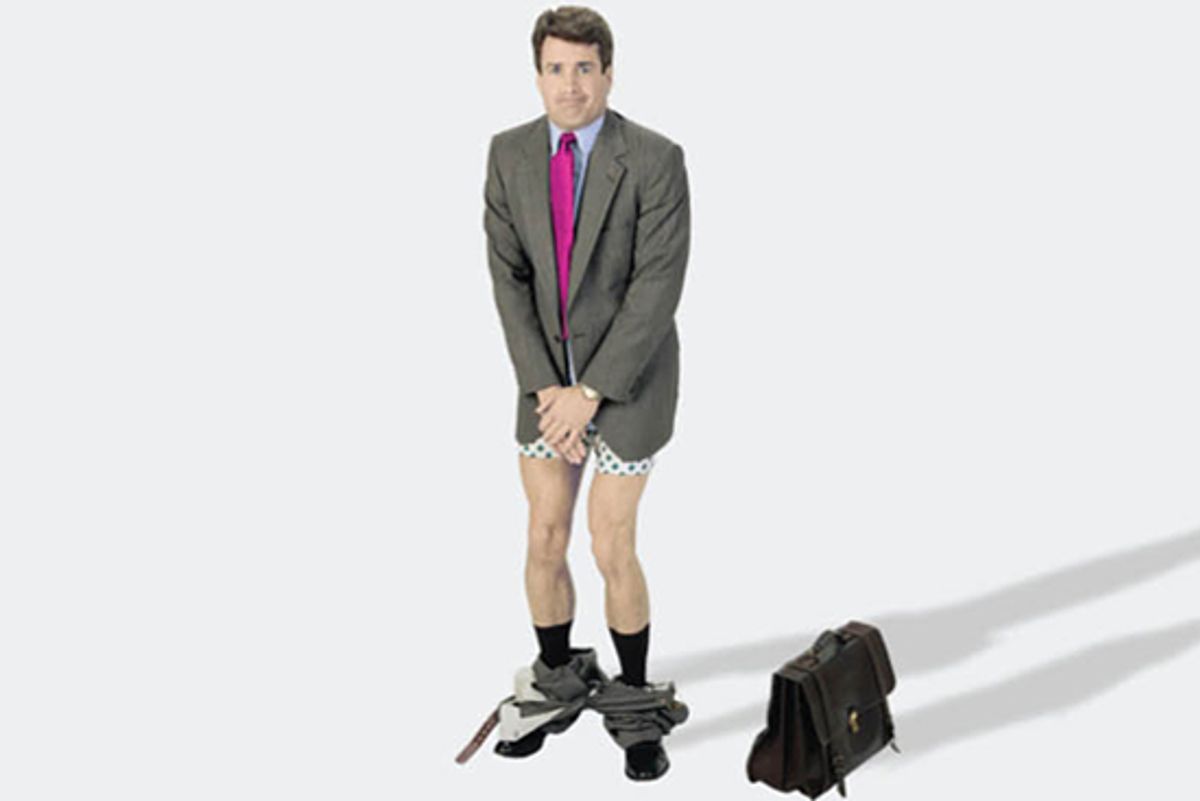 It was the road trip that launched a million Pampers jokes. In 2007, Lisa Nowak, a NASA astronaut and recently separated mother of three, drove from her home in Houston to Orlando, Fla., to seek vengeance on a romantic rival, armed with pepper spray, a BB gun, a folding knife, 4 feet of rubber tubing, lawn-size garbage bags -- and, supposedly, diapers, which the media concluded she had used to avoid pit stops on her drive. Even compared to celebrity scandals of the last few years, from Mel Gibson's racist tirades to Tiger Woods' infidelities, the Nowak story -- or as most people will remember it, the astronaut-love-triangle-diaper story -- is hard to forget, not only because of its irresistibly absurd details but also because, as Laura Kipnis argues in her extraordinary new book, "How to Become a Scandal," it exposes certain elemental truths about human nature. Jealousy, irrationality and self-sabotage can undermine even the most successful and rational of people. And most of us really love making jokes about absorbent undergarments.

Kipnis' books analyzes our relentless fascination with public downfalls through a handful of case studies: In addition to that of Nowak, Kipnis also dissects the bizarre story of former New York Chief Judge Sol Wachtler (who was arrested after impersonating a Texas private eye in order to intimidate his former mistress), author James Frey's public shaming by Oprah about the fabrications in his memoir "A Million Little Pieces," and Linda Tripp's betrayal of Monica Lewinsky. Kipnis is the author of the provocative polemic "Against Love" and the engaging feminist history "The Female Thing." This most recent offering is a brilliantly written, compulsively readable and remarkably insightful work about the resonance of scandal in American culture.

Salon spoke to Kipnis over the phone from Brooklyn, N.Y., about the meaning of Lisa Nowak's diaper, why we couldn't stand the sight of Linda Tripp's face -- and our insatiable hunger for public downfall.

What makes a good scandal?

There has to be some sort of transgression of behavioral norms. It doesn't have to be a lawbreaking offense -- as we saw in the Dr. Laura scandal. There has to be transgression but there also has to be a secret that's revealed and I think part of the pleasure of scandals is this exposé. It reassures us that there's a world of truth underneath the surface. I try to make the distinction in the book between celebrity gossip and scandal. I have to say that somebody releasing a sex tape by quote unquote accident is not what I would call a scandal. Gossip keeps us interested, but a scandal really touches on the trouble spots and social contradictions and existential problems we're all negotiating and can't figure out or reconcile.

They also reinforce appropriate rules of conduct in society. As the Mel Gibson incident showed, for example, there are certain things you just can't say in public.

These scandals show us where the lines of propriety are. There's the punishment of the transgression, but there's often a certain amount of vicarious pleasure we can take in the transgression itself. There's sometimes a little pleasurable frisson in seeing people violate rules. But in the Mel Gibson scandal there was also the pleasure of the eavesdropping. More and more of these private moments are being revealed through various forms of new technology.

The first section of the book explores the astronaut-diaper scandal from 2007. What made the Lisa Nowak story so fascinating?

It was about revenge and payback. This man had jettisoned her; she took this extreme action of trying to confront this new girlfriend, a response that most of us would censor ourselves from having. It was just so excruciating and humiliating if you had any moment of identification with her or empathy for her. But it also really revealed the importance of good props. I don't know how long the scandal would have played without the notable element of the diaper. You have this icon of American heroism; she's been to space, which is as high as you can get, and then she's supposedly in diapers, which is as low as you can get.

It was so fundamentally humiliating because it brings to mind bodily functions, which are such a fundamental taboo of our culture

The fundamental task of the adult human is self-management. We're supposed to be in control of ourselves and our bodily functions, which isn't always entirely possible. But the thing about the diaper was that it was also this incredibly great metaphor. What you see in the case of Lisa Nowak is this incredible incontinence: Her feelings were too incontinent; she couldn't contain herself. The diaper was the emblem for what happens in so many scandals, somebody who is, in some basic way, not in control of their emotions. And I don't think that's so unfamiliar for most of us. Even if you don't drive cross-country to confront your romantic rival, you may imagine it. Or have murderous fantasies toward him or her.

One of the notable traits of these scandals is the degree of oblivion, of not thinking ahead to possible consequences. A self-destructive imperative is underneath the surface in so many of these cases and I think that's part of what makes them so horrifying and fascinating.

And in the case of the Linda Tripp scandal, it reinforced popular ideas about both the precariousness of female friendship and physical ugliness.

One of the pleasures and horrifying elements of scandal is when they reinforce stereotypes that we're not supposed to have, like the stereotype of the toxic female friendship. One of the things I was interested in with Linda Tripp was all the joking about her ugliness. All the comedians' jokes were about her looks. It mapped onto her betrayal and ugly acts toward a friend, but  there was also something true about them; there was something distressing about the way she looked. What you start to realize is that there was something in conflict in the different regions of her face that made her expression register as off-putting to us. If you looked closely at her mouth when she smiled or talked, the upper lip raised up and she bared this row of attack teeth on the top, which registered subliminally as aggression. It looks like she's about to bite someone. This is somebody who if you look back on the story of her life and her upbringing, it was a really disappointing and troubled family situation. The lack of attractiveness almost seemed like a physical manifestation of her troubled past.

When you discuss James Frey, you write that, since a lot of our traditional scapegoats are now off-limits, we're left looking for new ones -- in this one case an author who invented part of his memoir.

The psychology of the scapegoat is similar to the psychology of what would be called projection, or projective identification. Everything you split off in yourself or disavow in yourself you get to punish someone else for having. I don't think James Frey acted that much more badly than other people do in relation to commerce. He was punished for writing a commercial book, which if you're familiar with publishing, is what authors are supposed to do. In the book, I use this piece that Oprah wrote for O Magazine on her weight gain, "How Did I Let This Happen Again?" as an example of a memoiristic piece of writing to show that nobody is totally capable of telling the truth about him- or herself. To various degrees it's all invention and fabrication.

There have recently been these twin scandals with a lot of parallels, the Jesse James and Tiger Woods adultery stories. Why were they so resonant?

Adultery is the main scandal topic of our time. Many people struggle with monogamy in practice, but we're fascinated by other people's inability to live up to the same vows. And it requires a certain amount of amnesia on our parts to be fascinated and outraged every time an adultery scandal breaks. The fact that we're surprised by the idea that a sports figure has a bunch of girlfriends is itself surprising.

In the cases of Tiger Woods and Eliot Spitzer, do you have to shut off some part of your own intelligence to think that this is not going to be revealed if you're in a public role that presumes you uphold ideals of family values? What does that say about humans' ability to compartmentalize or be capable of split consciousness? What I found interesting in the Tiger Woods scandal wasn't the adultery so much as the parade of women willing to come forward and reveal a lot of private information for their $ 10,000 from the Enquirer or their 10 minutes of fame.

Do you think that the Internet has changed the way we consume scandal?

There are now so many more venues and outlets that require this constant stream of scandalous product. There's also the speeded-up quality of everything and this instantaneous dissemination through cellphones and recording devices. I think the whole public private divide is undergoing a real transformation for all sorts of reasons that I think we won't be able to figure out for a while because we're in the midst of it.

Scandal and gossip have traditionally been linked to the feminine sphere. As you mention in the book, some people argue that women are more susceptible to disgust than men. Do you think that's true?

There's been this historic association between women and moralism, but I think that given the way gender codes are becoming reorganized, I'm not sure that women are more interested in scandal than men are. There's now so little distinction between politics and scandal. You could say beginning when Lyndon Johnson showed the world his appendix scar or when Reagan's colonoscopy records were revealed, politicians' private lives have also become increasingly public.