The president praises Bush, the media find Beck in bed with a Catholic hater, and deficits become the new WMD 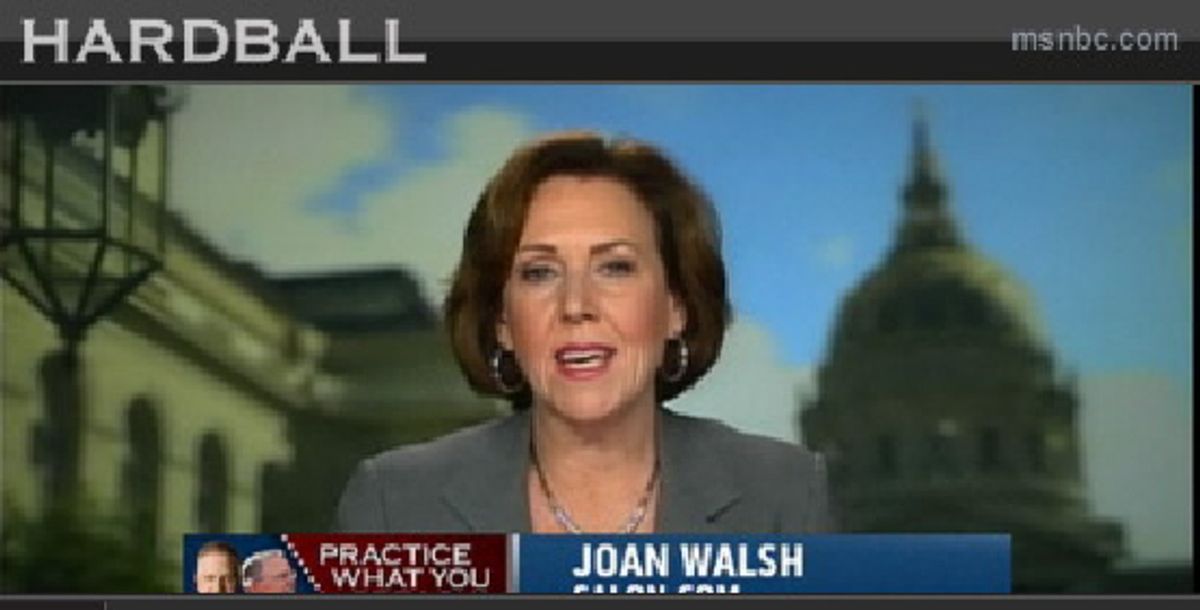 A big news day. I found President Obama's Iraq speech dispiriting. He deserves credit for withdrawing combat troops when he said he would, but our entanglement there is by no means over, and the growing role of private contractors in every realm of our involvement -- including some form of what most people would consider combat -- makes it hard to feel like things have fundamentally changed.

I was surprised, but I shouldn't have been, by Obama's kind words for his predecessor, George W. Bush. I didn't expect Obama to excoriate the neocon chickenhawks who lied us into war, but I wasn't entirely prepared for his praising the president who got us into this mess. But he did:

It's well known that he and I disagreed about the war from its outset. Yet no one could doubt President Bush's support for our troops, or his love of country and commitment to our security. As I have said, there were patriots who supported this war, and patriots who opposed it.

Wouldn't it be lovely if Bush repaid Obama's stretching the truth a bit there by speaking out to Republicans who falsely believe Obama is Muslim, that he wasn't born here, or to the 52 percent of Bush's party who say our president supports the imposition of Islamic law in this country. (Oh, and the former president might also join some of his colleagues in supporting the right of New York Muslims to build the Park51 community center near ground zero.) I won't hold my breath; Democratic statesmanship and generosity is almost always a one-way street.

Meanwhile, other news media picked up on what I observed Saturday: the incongruity of Glenn Beck inviting virulently anti-Catholic Rev. John Hagee to address the spectacular "Restoring Honor" tribute to himself that Beck staged on Saturday. (I talked about it on MSNBC's "Hardball," video below.) Hagee, it's well known, has called Catholicism "the great whore," and suggested Hitler was Catholic and the pope was responsible for the Holocaust. John McCain had to renounce Hagee's endorsement after his anti-Catholic bile was widely publicized. So why was he at Beck's rally?

I have no idea. Beck was raised Catholic, before he converted to Mormonism. He claims his new religious efforts are open to everyone, but he raised Catholic hackles back in March when he told his radio listeners they should leave any church that preached "social justice." The Catholic Church has of course preached social justice (admittedly along with less progressive ideas) since Jesus was a boy (I've always wanted to use that term literally), and officially, with papal encyclicals going back to Rerum Novarum in 1891, supporting the rights of workers to form unions, the need for just wages and the importance of government intervening to advance the common good (while backing private property rights as well). Even the comparatively conservative Pope Benedict XVI in 2009 released "Caritas in Veritate," a surprisingly progressive encyclical backing economic justice, environmental protection, global disarmament and equitable international development. Liberal Catholics saw Beck's "leave your church" rant as an attack on Catholicism. So I think the Hagee choice suggests Beck isn't terribly focused on welcoming Catholics into his big right-wing evangelical tent.

Finally, on the day President Obama announced the end of combat operations in Iraq, I saw Paul Krugman reminding us that our "serious" political class has a new Saddam Hussein: deficits. All "serious" political writers must treat deficits with as much deference as they treated Bush claims about weapons of mass destruction, which turned out not to exist. It was a disturbing thought on a sad day.  I wrote yesterday about my frustration with President Obama adopting a Republican anti-deficit frame for his economic pitch as we head into midterm elections that look bad for Democrats. I see nothing more encouraging on the political horizon today.

Meanwhile, House Minority Leader John Boehner is already measuring drapes in Speaker Nancy Pelosi's office (or rather ordering his putting green), and he told Sean Hannity he won't have a formal GOP platform for the 2010 elections until mid-September. But clearly Boehner thinks he doesn't need one. His own economic proposals -- mainly extending all the Bush tax cuts and repealing healthcare reform -- would add another $4 trillion to the deficit over the next 10 years, according to analysts at the New Democratic Network. He doesn't want that getting out to actual voters any time soon. I talked about that on MSNBC's "The Ed Show," and that video's here too.