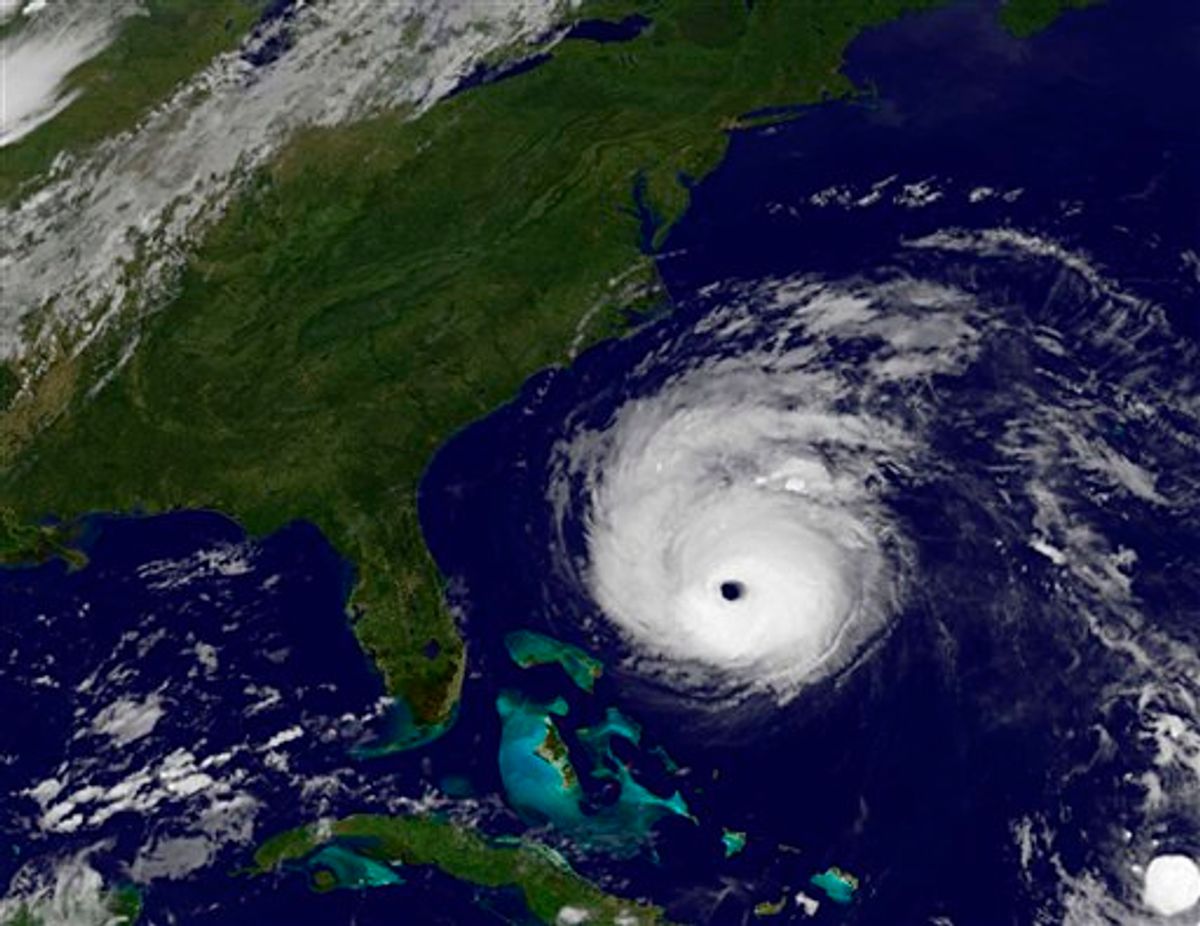 Hurricane Earl packed winds near 140 mph as it blew toward North Carolina on Thursday, putting the Eastern Seaboard up to Maine on alert for a Labor Day weekend pounding by waves, gales and rain.

A hurricane warning for the tip of Massachusetts, including Nantucket and Martha's Vineyard, joined earlier warnings and watches for hurricanes or tropical storms that stretch from North Carolina up to near the Canadian border.

Earl was a dangerous category 4 storm with no significant change in strength forecast before it comes close to the Outer Banks late Thursday, then turns north in rough parallel to the coast, the National Hurricane Center in Miami said.

The center's director, Bill Read, said the eye of the storm will likely remain about 30 to 75 miles east of the Outer Banks. At the closest point of approach, the western edge of the eye wall could impact Cape Hatteras, with huge waves, beach erosion and maybe some property damage from the waves.

"They're going to have a full impact of a major hurricane," Read said. "Maybe not the strongest winds but a large area of tropical storm force and probably gusts to hurricane force along the islands."

There will be a similar close point of approach for the eastern tip of Long Island, Rhode Island, Martha's Vineyard, and Nantucket.

"They'll be facing a similar scenario that North Carolina is facing today," Read said. "And it will be bigger. The storm won't be as strong but they spread out as they go north and the rain will be spreading from New England."

That will mean strong, gusty winds much like a nor'easter, and because leaves are still on the trees, there could be fallen trees or limbs and downed power lines.

"This is the strongest hurricane to threaten the northeast and New England since Hurricane Bob in 1991," said Dennis Feltgen, a meteorologist and spokesman for the National Hurricane Center. "They don't get storms this powerful very often."

Tourists were largely gone from North Carolina's Outer Banks, but residents who stayed behind said they were prepared to face down the powerful hurricane.

Gov. Beverly Perdue told reporters at a morning news conference that North Carolina is prepared for Earl. It's now up to coastal citizens to get to a safe place as the storm passes by, she said.

Evacuations continued early Thursday on the coast, with residents and visitors told to leave a barrier island in Carteret County and another in Dare County where the Wright Brothers National Memorial marks their first successful airplane flights at Kitty Hawk in 1903.

Residents like Nancy Scarborough, who manages the Hatteras Cabanas, said Outer Banks residents have a tight-knit community that takes care of its own.

"I worry about not being able to get back here," she said. "I'd rather be stuck on this side than that side."

Along with the 30,000 residents and visitors asked to leave Hatteras Island, 5,000 more tourists were ordered to leave Ocracoke Island, which is only accessible by ferry and airplane.

Many people -- boaters, beachgoers and residents alike -- were adopting a wait-and-see approach, making simple preparations like stocking up on food or attaching hurricane shutters to their houses. But with the likelihood that the storm's ultimate path will become clear on Thursday, officials expect planning to shift into high gear.

"Post-Katrina, people are really sensitive to storm preparedness," said Atlantic Beach, N.C., Mayor Trace Cooper. "I don't think we're going to see too many people sticking around and saying they're going to have hurricane parties. You see enough pictures of people waiting on their roofs to be rescued and you decide to take precautions."

The North Carolina National Guard is deploying 80 troops to help and President Barack Obama declared an emergency in the state. The declaration authorizes the Department of Homeland Security and Federal Emergency Management Agency (FEMA) to coordinate all disaster relief efforts.