There's always been a big audience in the U.S. for conspiracy theories and religious melodrama 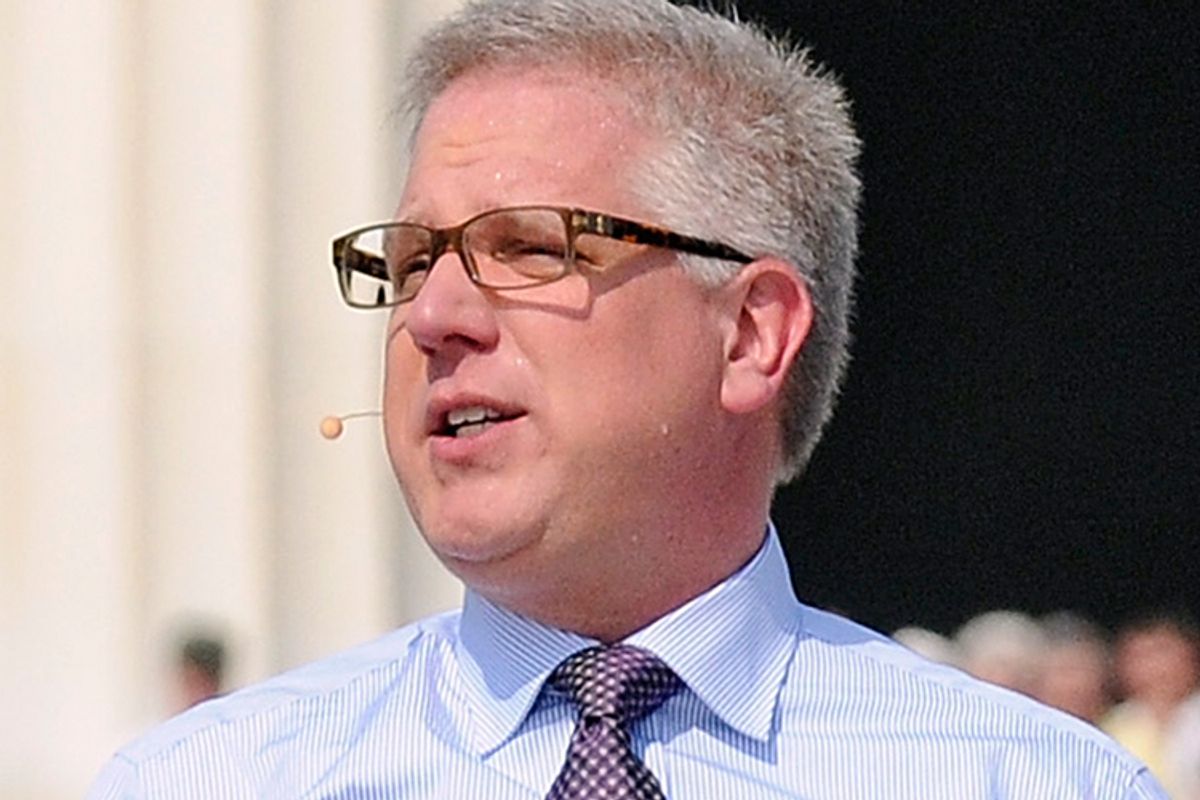 Glenn Beck addresses supporters at his "Restoring Honor" rally in Washington on Aug. 28.
--

Here we go again. A self-promoting TV evangelist has summoned yet another gullible throng to a Washington pep rally/prayer meeting, and everybody's expected to ponder its vast significance. But what if it hasn't actually got any? Except perhaps as a validation of H.L. Mencken's timeless observation that "No one ever went broke underestimating the taste of the American public."

To Fox News impresario Glenn Beck, who staged the so-called anti-Woodstock at the Lincoln Memorial, its impact was literally cosmic. In promos, Beck modestly compared the event to such landmarks in American history as the Declaration of Independence, Iwo Jima, the moon landing, the Montgomery school bus boycott, and, of course, to Martin Luther King Jr.'s epochal "I Have a Dream" speech, delivered on the same date in 1963.

Claiming divine inspiration, the former disc jockey promised miracles. "You're going to see the spirit of God unleashed," he told his radio audience. Even the weather signaled the Lord's approval. "Dare I say it, God is smiling?" Afterward, Beck showed video of a flock of Canada geese honking their way over the Tidal Mall. "God's flyover," he called it, and "a miracle."

Beck then appeared on (where else?) "Fox News Sunday," to pronounce President Obama an adept of "liberation theology," which he decreed "a perversion of the gospel of Jesus Christ." Beck himself is a Mormon.

This may have puzzled Fox News viewers who think the president's a Muslim, but let's not sweat the small stuff. Beck could call Obama a Zoroastrian or a space alien and his fans wouldn't know the difference.

To the Associated Press, the portents were more mundane, but nevertheless significant. "If Democrats had doubts about the voter unrest that threatens to rob them of their majority in Congress," Phillip Elliott's account began, "they needed only look from the Capitol this weekend to the opposite end of the National Mall. ... Neither Democrats nor Republicans can afford to ignore the antiestablishment fervor displayed Saturday during Beck's rally."

On the left, some of my own more excitable correspondents saw the KKK. "Exchange the white sheets for the black robe regiment," wrote one fellow with reference to Beck's (basically imaginary) army of evangelical Founding Fathers. Another observer at Firedoglake.com made the obligatory Nazi comparison, writing of "Beckstallnacht," as in "Kristallnacht" -- anti-Jewish pogroms in 1938.

Even the estimable David Niewart saw something ominous. "Given the content of Beck's rally," he wrote, "something significant did happen Saturday, and it will affect our discourse going forward: Beck officially and publicly married the tea party movement to the Religious Right. ... That is a deeply disturbing development."

So what else is new? The Tea Party conterminous with the religious right? Why next they'll be saying the Moral Majority's allied to the Christian Coalition!

Let's take them in order. First, regarding the 2010 congressional elections, if even 10 percent of the estimated 100,000 or so attending Beck's shindig had voted for President Obama to begin with, it might have political significance.

But as that's highly unlikely, all that the gathering tells us is something we already knew. An awful lot of rural and small-town white Protestants feel estranged and a little paranoid, especially given bad economic times.

Partly it's what psychiatrists call projection: Will they now be treated as second-class citizens? It's also partly a reflection of the fact that "rednecks" are basically the only American ethnic group it's still OK to lampoon. These are Beck's people. But they were always going to vote GOP, because they always have.

Second, I'll start heeding warnings about "brown shirts" when mobs of unemployed young men start smashing windows and burning cars. Crowds of retirees singing patriotic hymns and praying are no more objectionable than the Rev. Jeremiah Wright, and no real threat to anybody.

Fox News' average audience is 65. Because he's on in the afternoon, Beck's demographic probably trends older. Fifteen years ago, the old-timers attending his politicized prayer meeting were all agog about the Rev. Jerry Falwell's lurid video "The Clinton Chronicles," portraying a Democratic president and his wife as drug smugglers and murderers.

(In a filmed interview, I once asked Falwell if the commandment against false witness was less important than the one forbidding adultery. Rather to his credit, he said they were the same. Of course, what else could he say?)

More recently, the same cohort made Tim LaHaye's awful "End Times" novels a huge bestseller. There's always been a big audience in the United States for conspiracy theories and religious melodrama. The apocalyptic theology of the hard-shell denominations where hucksters like Beck and his costar Sarah Palin have their biggest following basically demands it. It's Satan worship one year, secular humanism the next. The latest bogeyman is Islamic fundamentalist Shariah law, an almost purely theoretical threat in the USA.

Which actually constitutes progress. Back in Mencken's day the enemies were Catholics and Jews.