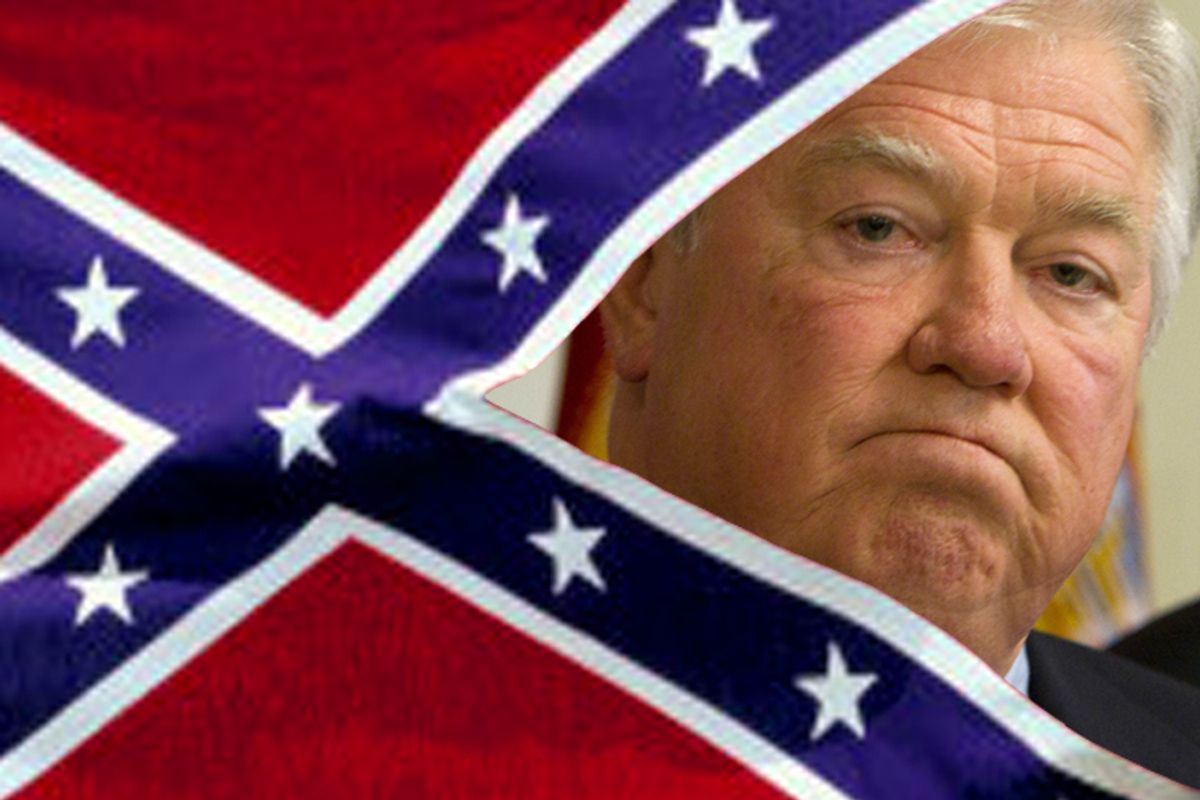 Almost 50 years ago, the Republican Party made a decision to embrace the backlash generated by civil rights among white Southerners.

Traditionally, they had been staunch Democrats, but they were also culturally conservative, and as Lyndon Johnson and the Democratic Party embraced civil rights once and for all, they were up for grabs. The Republican Party offered them a home, a steady, decades-long realignment ensued, and today conservative Southern whites comprise the heart of the GOP -- just as culturally liberal Northerners, who called the GOP home before civil rights, have migrated to the Democratic Party.

There's nothing new about this story. In fact, it's the story LBJ himself predicted when he signed the Civil Rights Act in 1964 and supposedly mused, "There goes the South for a generation."

But it's an inconvenient story for today's Republican Party, which still relies on cultural, racial and ethnic wedge issues to keep its base in line -- but which also needs to win over less conservative suburbanites across the country to compete in national elections. And it's a particularly inconvenient story for Haley Barbour, the 62-year-old Mississippi governor who aspires to run as the Republican nominee against the nation's first black president.

So Barbour has invented his own sanitized, suburb-friendly version of history -- an account that paints the South's shift to the GOP as the product of young, racially inclusive conservatives who had reasons completely separate and apart from racial politics for abandoning their forebears' partisan allegiances. In an interview with Human Events that was posted on Wednesday, Barbour insists that "the people who led the change of parties in the South ... was my generation. My generation who went to integrated schools. I went to integrated college -- never thought twice about it." Segregationists in the South, in his telling, were "old Democrats," but "by my time, people realized that was the past, it was indefensible, it wasn't gonna be that way anymore. So the people who really changed the South from Democrat to Republican was a different generation from those who fought integration."

This is utter nonsense.

For a century after the Civil War, the South was deeply and overwhelmingly Democratic, a consequence of the "humiliation" visited upon white Southerners by the Republican-initiated Reconstruction that followed the Civil War. The level of support enjoyed by Democratic candidates in the region is almost too astronomical to fathom now. In 1912, Woodrow Wilson took 42 percent of the vote nationally in a four-way presidential contest. But in South Carolina, he snared 95 percent. In Mississippi, 88 percent. While he was grabbing 60 percent nationally in 1936, Franklin Roosevelt scored 97 percent in Mississippi and nearly 99 percent in South Carolina. The region's congressional delegation was uniformly Democratic -- and, thanks to the South's one-party status, disproportionately influential, with lifelong incumbents taking advantage of the congressional seniority system to secure the most powerful committee gavels.

For decades, they comfortably coexisted in the national Democratic Party's other major source of support, the machine-folk of the urban North. But as civil rights became a national issue -- and as the Great Migration of Southern blacks to the cities of the North and West turned civil rights into a priority for Democrats outside the South -- the coalition began to splinter. When the party ratified a civil rights plank at its 1948 convention, Southern Democrats staged a walkout and lined up behind Strom Thurmond, South Carolina's governor and (like all Southern Democrats of the time) an arch-segregationist. Running under the Dixiecrat banner, Thurmond won four Deep South states that fall.

Throughout the '50s and early '60s, Southern Democrats sat in political limbo. Their national brethren were inching their way toward a full-on embrace of civil rights, but the GOP wasn't much of an alternative, not with Dwight Eisenhower endorsing integration and not with the party's Northern-dominated congressional ranks strongly backing civil rights legislation.

1964, though, is what changed everything. In signing the Civil Rights Act, LBJ cemented the Democrats as a civil rights party. And in nominating anti-civil rights Barry Goldwater for president (instead of pro-civil rights Nelson Rockefeller) the GOP cast its future fortunes with the white electorate of the South. LBJ trounced Goldwater nationally that fall, winning more than 60 percent of the popular vote. But in the South, voters flocked to the Republican nominee, with Goldwater carrying five states in the region. Mississippi, the same state that had given FDR 97 percent of its votes 28 years earlier, now gave Goldwater 87 percent. That fall, Thurmond, now a senator, renounced his Democratic affiliation once and for all and signed up for Goldwater's GOP. The realignment was well underway, and it had everything to do with race.

All of this, mind you, happened before Barbour -- who claims that his generation led the South's migration to the GOP for non-racial reasons -- was old enough to vote. And while it did take a few decades to solidify the South as a top-to-bottom GOP stronghold, you can draw a straight line from the GOP's embrace of Goldwater and his segregationist allies in '64 through Richard Nixon's Thurmond-aided Southern Strategy and Ronald Reagan's 1980 embrace of "states' rights" in Philadelphia, Miss., and to the present day, when Republican candidates routinely win 85 percent of the white vote in statewide elections in the Deep South.

Actually, Barbour's account of his own civil rights-era political coming of age, which he relates in a different part of the Human Events interview, tells the story of the South's partisan transformation very well. His father and grandfather, he notes, were both Democrats -- "Eastland Democrats," to be precise.

That would be James Eastland, an ardent segregationist senator who represented Mississippi from 1943 to 1978. Dubbed "the voice of the white South," Eastland declared that Brown v. Board of Education "destroyed" the Constitution and that segregation was the "correct, self-evident truth" and "the law of nature." When three civil rights workers in Mississippi disappeared in the Freedom Summer of '64 (they were murdered, it turned out), Eastland privately told LBJ that no one had really disappeared -- that it was all "a publicity stunt."

Eastland, like many Southern segregationists, remained in the Democratic Party even after civil rights. But he aligned himself with the Nixon administration -- there's that Southern Strategy again -- and regularly voted with the GOP.

Barbour, too, aligned himself with Nixon, signing up with the Republican's 1968 presidential campaign, when he was just 20 years old. In the Human Events interview, he casts this as a risky, against-the-grain decision, since there were so few Republicans in the South back then, but it really wasn't; remember, Mississippi had just given 87 percent of its votes to the Republican presidential candidate in '64.

And why did Barbour join the GOP? "I don't know what possessed me, other than my oldest brother came home from the Army a Goldwater Republican in 1965." In other words, his brother -- a member of Barbour's generation, the generation that supposedly didn't see race -- left the Democratic Party just as LBJ signed the Civil Rights Act, just as the Republicans nominated a civil rights opponent for president, and just as almost every white Mississippi voter crossed party lines to vote for that civil rights foe and brought young Haley along with him. But race had nothing to do with it!

In Barbour's revisionist history, old segregationist Democrats from the South stood in the way of integration in the '50s and '60s, but then a new, enlightened generation of post-racial conservatives came of age and transformed the region into a Republican bastion for ... some other reason.

In reality, the Republicans' domination of the South today is a direct result of the party's rejection of civil rights in '64 (and Nixon's Southern Strategy, which called for coded appeals and behind-the-scenes assistance to Southern bigots). The partisan disparities in Southern elections speak to an enduring racial divide: While Barack Obama won nearly 45 percent of the white vote nationally in 2008, he got just 11 percent in Mississippi and 10 percent in Alabama.

It's understandable why Barbour doesn’t like to talk about this -- and why most national Republicans would rather ignore it. The South is critical to them, and their support in that region comes almost exclusively from white voters. But to be a national party -- and to win the White House -- requires votes from educated suburbanites outside the South who have a strong distaste for racial politics. Thus, the party takes pains every four years to showcase as many black Republicans as it can at its national convention -- a message not so much to black voters but to white suburbanites who want reassurance that they're not voting for a Goldwater party.

This balancing act is especially critical to Barbour, who knows the suspicions he'll face from those suburban swing voters if he ends up challenging Obama in '12. If he can get them to believe his whitewashed version of history, it'll be a lot easier to win them over.