Earl weakens, but still a threat with 115 mph winds 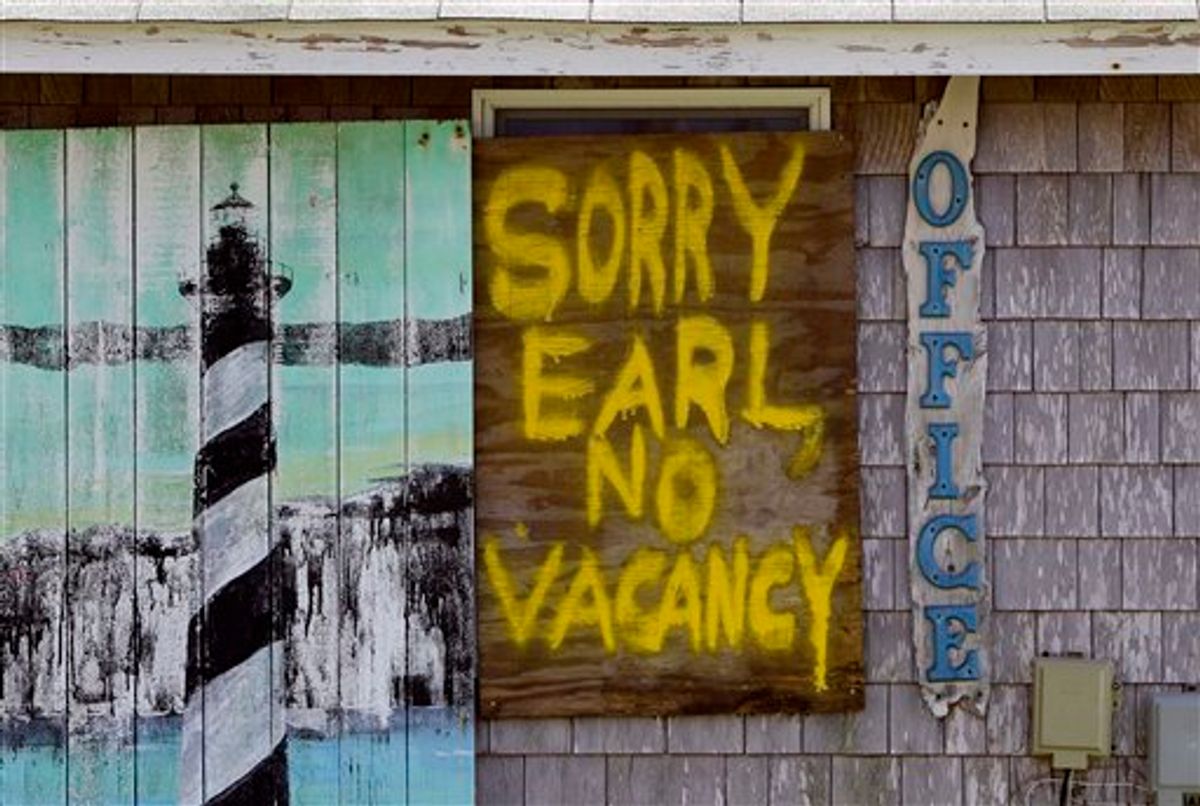 A window is boarded up with a message at the Buxton Beach Motel in Buxton, N.C., Wednesday, Sept. 1, 2010 as Hurricane Earl approaches North Carolina's Outer Banks. (AP Photo/Gerry Broome) (AP)
--

The last ferry left for the mainland and coastal residents hunkered down at home as Hurricane Earl closed in with 115 mph winds Thursday on North Carolina's dangerously exposed Outer Banks, the first and potentially most destructive stop on the storm's projected journey up the Eastern Seaboard.

The hurricane's leading edge brought on-and-off light rain in the afternoon to the long ribbon of barrier islands, which were expected to get the brunt of the storm around midnight. Heavy surf was already washing over the only highway on Hatteras Island before sundown but crews were able to keep the road open.

Earl's arrival could mark the start of at least 24 hours of stormy, windy weather along the East Coast. During its march up the Atlantic, it could snarl travelers' Labor Day weekend plans and strike a second forceful blow to the vacation homes and cottages on Long Island, Nantucket Island and Cape Cod.

It was unclear exactly how close Earl's center and its strongest winds would get to land. But Federal Emergency Management Agency Administrator Craig Fugate said people shouldn't wait for the next forecast to act.

"This is a day of action. Conditions are going to deteriorate rapidly," he said.

Shelters were open in inland North Carolina, and officials on Nantucket Island, Mass., planned to set up a shelter at a high school on Friday. North Carolina shut down ferry service between the Outer Banks and the mainland. Boats were being pulled from the water in the Northeast, and lobstermen in Maine set their traps out in deeper water to protect them.

Massachusetts Gov. Deval Patrick declared a state of emergency. Similar declarations have also made in North Carolina, Virginia and Maryland.

As of Thursday afternoon, though, the only evacuations ordered were on the Outer Banks, which sticks out into the Atlantic Ocean like the side-view mirror on a car, vulnerable to a sideswiping. About 35,000 tourists and residents were urged to leave.

Earl weakened into a Category 3 storm with 115 mph winds on Thursday. A slow winding down was expected to continue as the storm moved into cooler waters, but forecasters warned the size of the storm's wind field was increasing, similar to what happened when Hurricane Katrina approached the Gulf Coast five years ago.

"It will be bigger. The storm won't be as strong, but they spread out as they go north and the rain will be spreading from New England," National Hurricane Center Director Bill Read said.

The eye of the storm was expected to pass about 50 miles southeast of Cape Hatteras, N.C. But even at that distance, Earl could have a punishing effect, since hurricane-force winds of 74 mph or more extended 70 miles from its center and tropical storm-force winds of at least 35 mph reached more than 200 miles out.

Hundreds of the Outer Banks' more hardy residents gassed up their generators and planned to hunker down at home behind their boarded-up windows, even though officials warned them that it could be three days before they could expect any help and that storm surge could again slice through the islands. It took crews two months to fill the breach and rebuild the only road to the mainland when Hurricane Isabel carved a 2,000-foot-wide channel in 2003.

"It's kind of nerve-racking, but I've been through this before," said 65-year-old Herma De Gier, who has lived in the village of Avon since 1984. De Gier said she will ride out the storm at a neighbor's house but wants to be close enough to her own property so she can quickly deal with any damage.

Officials warned once the winds began to pick up, police, firefighters and paramedics probably weren't going to answer emergency calls.

"Once this storm comes in and becomes serious, once it's at its worst point, we are not going to put any emergency worker in harm's way," North Carolina Gov. Beverly Perdue said.

Forecasters said that after Earl passes the Outer Banks, a kink in the jetstream over the eastern U.S. should push the storm away from the coast, guiding it like a marble in a groove.

Earl is expected to move north-northeast for much of Friday, staying away from New Jersey and the other mid-Atlantic states, but also passing very close to Long Island, Cape Cod and Nantucket, which could get gusts up to 100 mph. The storm is expected to finally move ashore in Canada sometime Saturday afternoon.

Much of New England should expect strong, gusty winds much like a nor'easter, along with fallen trees and downed power lines, forecasters said.

"This is the strongest hurricane to threaten the Northeast and New England since Hurricane Bob in 1991," said Dennis Feltgen, a meteorologist with the National Hurricane Center.

Clayton Smith and his colleagues at a yacht servicing company in New England scrambled to Nantucket to pull boats to safety, hoping to get about 40 vessels out of the water in two days.

"Complacency is a bad thing," Smith said. "It's better to be safe than sorry."

But many people in Nantucket weren't too worried about Earl. Arno's Main Street Grill plans to stay open Friday as long as possible said owner Chris Morris. The hurricane might even be good for business.

"There's not much else to do during a hurricane besides eat and drink," he said. "I mean, there's only so many times you can visit the whaling museum."

The storm is likely to disrupt travel as people try to squeeze in a few more days of summer vacation over Labor Day. Continental Airlines canceled 50 departures from Newark on its Continental Connection and Continental Express routes along the East Coast, beginning Thursday night. Other airlines were watching the forecast and waiving fees for changing flights. Amtrak canceled trains to Newport News, near Virginia's coast, from Richmond, Va., and Washington. Ferry operators across the Northeast warned their service would likely be interrupted.

And the Army Corps of Engineers warned it would have to close the two bridges connecting Cape Cod to the rest of Massachusetts if winds got above 70 mph.