The profound mystery of the "enthusiasm gap"

I'm somewhat pressed for time today, but wanted to note the following items just from the last 24 hours, all of which are significant in their own right and, taken together, make an important point:

(1) Huffington Post's Sam Stein notes the increasing number of conservatives who now advocate same-sex marriage; how that places them to the left on this human rights issue of Barack Obama, who continues to explicitly oppose marriage equality; and how Democratic operatives are worrying that the Party, as a result, risks losing the devotion of gay activists and, especially, their money.

(2) In November, California voters will vote on Proposition 19, which would legalize marijuana in that state (I'm on the Board of Advisers of Just Say Now, an organization working for its passage).  It was announced today that Democratic Sen. Dianne Feinstein -- Iraq War supporter, champion of Bush appointees Michael Hayden and Michael Mukasey, Surveillance State cheerleader, and beneficiary of her husband's vast, defense contracting wealth -- will take the lead in working to defeat Prop 19 and thus keep marijuana criminalized, in turn keeping Mexican cartels empowered and adult American citizens prosecuted for using this substance which is far less harmful and dangerous than alcohol, if it is even "harmful" or "dangerous" at all.

(3) Substantial polling data makes clear that Latinos are among the most disenchanted Democratic voting bloc, as they are furious at the White House for repeatedly violating promises on immigration reform.  Large numbers of Latino voters now blame both parties almost equally for failures in immigration policy.

(4) At Daily Kos, Joan McCarter documents that progressive and even Democratic Party journalists are now openly acknowledging what has long been clear:  President Obama's Deficit Commission was structured so as to ensure recommendations for, among other things, cuts in Social Security benefits, to be voted on right after the election is nice and over with (an election the Democrats are trying to win by parading around as the protectors of Social Security).  Also at Daily Kos, Laurence Lewis describes how similar this dynamic is to prior political controversies, where Democrats held themselves out publicly as believing one thing while privately working for the opposite.

(5) Following Robert Gibbs' announcement that liberal Obama critics should be drug tested, and before that, Rahm Emanuel's declaration that the same group is "fucking retarded," a new book by former Obama "car czar" Steven Rattner describes how Emanuel worked to thwart union interests and declared, in the midst of the auto bailouts:  "Fuck the UAW."

(6) Daphne Eviatar of Human Rights First argues that the military commission prosecution of child soldier Omar Khadr is itself a war crime.

(7) Several people emailed me links to comments and diaries over the last couple days viciously complaining about my observation of a worsening economy since Obama became President.  I suppose it all depends on what metric you use and whose economic interests you care about.  While it's true that the crisis of a full-scale collapse was temporarily averted, I was actually referring to this: 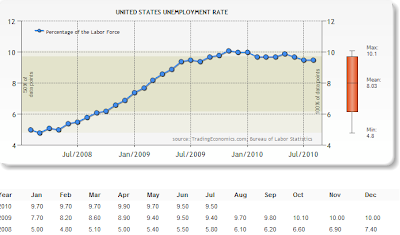 And, of course, the only reason for the recent, slight "decline" is because so many people have stopped looking for work altogether that they are no longer even counted.  Robert Reich has more today on the attempt to seize on largely unimportant data to proclaim an improving economy.

Assembling all of these facts together, one is left with this befuddling mystery:  why is there such a huge and growing "enthusiasm gap," where so many Democrats and progressives are unmotivated even to bother to vote in November, notwithstanding all the fear-mongering (much of it legitimate) over the GOP extremists?  Is it really hard to see?

This year isn't getting away from the Democrats because voters are moving toward the Republicans en masse. But the enthusiasm gap is turning races that would otherwise be lean Democratic into toss ups, turning toss ups into leaning Republican, and turning leaning Republican into solid Republican.

What's most amazing about this is that Democrats generally and the White House specifically seem completely uninterested in doing anything about this -- other than exacerbating it.  The need to do something is what leads me to believe (without knowing) that Obama will nominate (without necessarily causing to be confirmed) liberal favorite Elizabeth Warren to head the new Consumer Protection Agency created by the Financial Regulation bill.  If they do that and are serious about it, that would definitely be a good thing, but at this point, Democratic malaise and apathy are so entrenched that it's hard to imagine a single nomination doing much to change it.