When the stock market doesn't matter 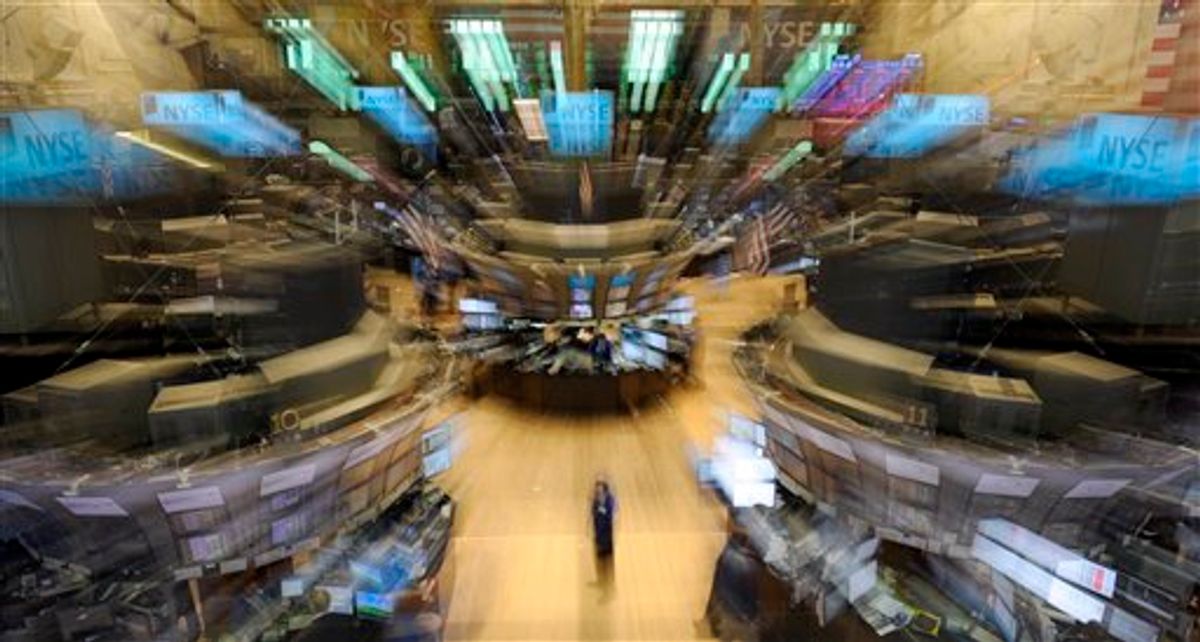 FILE - In this Aug. 19, 2010 file photograph, shot with a zoom lens, traders at work on the trading floor of the New York Stock Exchange, in New York. The economic outlook is weakening, home sales are plunging and stocks are on a four-month slide capped by a disappointing August. Now the potentially even scarier part for investors: We are entering what is historically the worst month in the market. (AP Photo/Henny Ray Abrams, file) (AP)
--

Pay no attention. The stock market has as much to do with the real economy as the weather has to do with geology. Day by day there’s no relationship at all. Over time, weather and geology interact but the results aren’t evident for many years. The biggest impact of the weather is on people's moods, as are the daily ups and downs of the market.

The real economy is jobs and paychecks, what people buy and what they sell. And the real economy -- even viewed from a worldwide perspective — is as precarious as ever, perhaps more so.

Wednesday's rally was triggered by news that one of China's official measures of its growth -- its Purchasing Managers Index -- rose. The index had been in decline for three straight months.

Why should an obscure measurement on the other side of the world cause stock markets in New York, London and Frankfurt to rally? Because China is so large and its needs seemingly limitless that its growth has been about the only reliable source of global demand.

Many big American companies have been showing profits because they’re doing ever more business in China while cutting payrolls at home. American consumers aren’t buying much of anything because they’ve lost their jobs or are worried about losing them, and are still trying to get out from under a huge debt load (the latest figures show more consumer debt delinquent now than last year and a surge in personal bankruptcies). The U.S. housing market is growing worse, auto and retail sales are dropping, and the ranks of the jobless continue to swell.

Europe is in almost as much a mess. The problem there isn’t just or even mainly that Greece and other nations on the "periphery" have too much public debt. A bigger problem is European consumers aren’t buying nearly enough to generate more jobs. Unemployment remains high, and the trend is bad. Manufacturing growth there has slowed to its weakest pace in six months. Yet bizarrely, Europe’s large economies – Britain, Germany and France -- are paring back their public budgets. It’s exactly the wrong time, and a recipe for disaster.

Germany’s so-called job miracle (as Chancellor Angela Merkel calls it) is more mirage than miracle. Most of the gains in employment there have come from part-time jobs, often at low pay. Average annual net income per German employee continues to drop. This explains why domestic demand there is so sluggish and why Germany is desperately dependent on its exports of machinery and manufacturing components to Asia, especially China.

Meanwhile, Japan, now the world’s third-largest economy, is a basket case. Japanese consumers aren’t buying much of anything, and why would they? The country is still in the grip of a deflationary cycle that shows no end. Japanese consumers reason if they can buy it cheaper next week there’s no reason to buy now. Basically the only things keeping Japan’s economy going are its exports of cars and electronic components to China.

Australia is booming, but look closely and you see the same buyer. Australia is making a boatload of money selling its minerals and raw materials to China (Australia is fast becoming one big Chinese mine shaft). The Brazilian economy is soaring. Why? Exports of wheat and cattle to China. Middle East oil producers are getting richer. Why? China’s insatiable thirst for oil.

Elsewhere around the globe the picture is as uncertain. Much of Pakistan is underwater. Much of the rest of the Middle East is under tyrannical or corrupt regimes. Russia has suffered such a dry spell it’s hoarding wheat. Despite its wealthy few, India’s masses are still terribly poor.

The stock market could plunge tomorrow or the next day because the world’s economic fundamentals are so precarious.

The global economy cannot be sustained by one big, voracious nation – especially one that’s suffering bouts of civil unrest, actively repressing dissent, suffocating under a blanket of pollution and coping with other environmental hazards, and whose biggest companies are run by the state.