At 26, I'm part of a generation raised on gadgets, but actual books are something I just refuse to give up 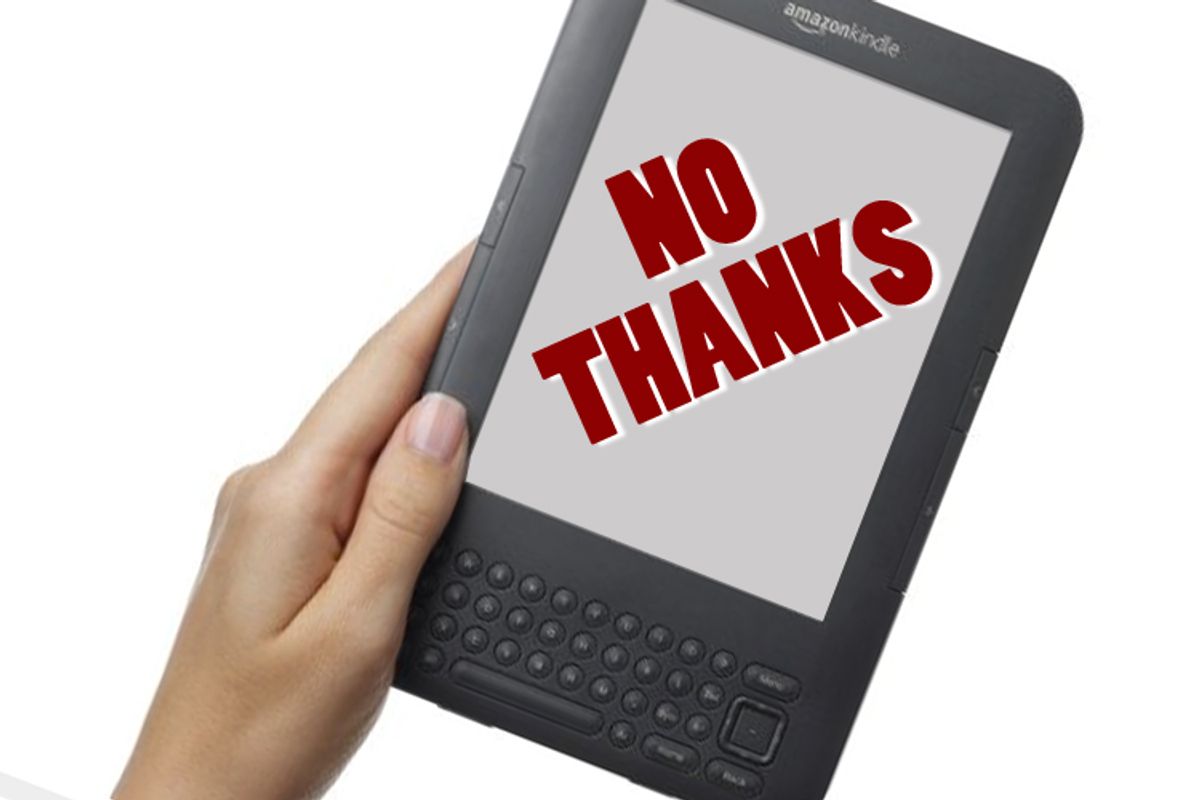 On the 2 train uptown during the morning commute the other day, I was in my usual state of sleepwalk -- face crammed into a fellow passenger's armpit -- when a young woman standing 3 feet away from me removed an Amazon Kindle from her oversize designer purse and began to read. A surprising wave of disgust overcame me as I stared at the smooth metallic back of the thing, at her manicured fingernails positioned against it, at her face as she read ... whatever it was that she was reading.

That was part of it, I realized, trying to analyze my own ridiculous, knee-jerk judgment of this stranger. I couldn't see what she was reading, and it bothered me. I couldn't peer in that tiny window onto someone's interior world, or delight in the juxtaposition that a book choice sometimes presents -- when you notice a stuffy, 90-something grandma buried in a trashy romance novel, or a would-be gangsta engrossed in "Love in the Time of Cholera."

But at 26, a supposed child of the Internet generation (who, I recently discovered, must henceforth be referred to as "The Millennials," and discussed in the media mainly in reference to our refusal to get real jobs or move out of our parents' basements), I've begun to feel out of step with this particular aspect of youth culture. I'm starting to understand what my grandmother must feel when she heads to the library once a week to dutifully check the e-mail account my uncle created for her. As I stared at the woman, fully engaged, happily using this very practical and very expensive device that, for all I know, she saved her pennies for a year to buy, I felt something entirely out of proportion with the situation: I felt personally slighted.

I never thought my lack of interest in e-readers made me particularly unique -- until recently, when Consumer Reports and national headlines started implying I was actually in a freakish minority. Earlier this summer, you could practically hear the collective weeping of small publishers nationwide when Amazon announced that Kindle books were outselling hardcovers by a 180-to-100 margin. Then came the drumbeat for the thinner, cheaper Kindle model forthcoming in September, and the competitors' accompanying rush to stay in the game. A crop of stories attempted to sort out the so-called e-reader wars: Kindle vs. iPad vs. Nook – which is right for you? More service-oriented articles provided tips for all the people who aren't me: "Copying Text From Your Kindle to Computer," or "The Best Way to Highlight Passages on Your Nook" (hint: not with an actual highlighter). These articles all had slightly different aims, but their bottom line was the same: Of course you need to buy an e-reader. What are you, a Mennonite?

One recent story in the New York Times went so far as to claim that iPads and Kindles and Nooks are making the very act of reading better by -- of course -- making it social. As one user explained, "We are in a high-tech era and the sleekness and portability of the iPad erases any negative notions or stigmas associated with reading alone." Hear that? There's a stigma about reading alone. (How does everyone else read before bed -- in pre-organized groups?) Regardless, it turns out that, for the last two decades, I've been Doing It Wrong. And funny enough, up until e-books came along, reading was one of the few things I felt confident I was doing exactly right.

My mother likes to say that I taught myself to read at a very young age, but the truth is I wanted to do whatever my older sister was doing, and when I was 3 and my sister was 8, she had reading homework and I didn't. So, naturally, I curled up behind her as she did school handouts and bugged the crap out of her, asking what individual words said until I started to recognize them. From that age on, books were my constant companions. I would walk down the street reading, pulled by unseen forces into another universe until I was no longer a participant in my own; I walked into trees and lampposts on more than one occasion. I would sulk if asked to put my book away at the dinner table. On long car trips -- of which there were many, my parents being children of the '60s, for whom a week-long drive to see Indian ruins and red rock formations was the ideal way to spend time off -- I refused to accept that reading gave me motion sickness. This explains why, in the vast majority of our family vacation photos, I have quite clearly either just thrown up or I am just about to.

My relationship with the printed word changed somewhat as I moved into adolescence and learned, for better or for worse, to dissect and analyze literature for social meaning rather than devour it at face value. But my commitment to books as the surest form of escapism has never wavered. Escapism, having as a prerequisite the ability to get completely lost in something, to the degree that you walk into trees.

Nobody knows exactly how the Internet and its many hand-held incarnations -- as well as the culture of being constantly plugged-in -- will affect our health and well-being in the long run. The Internet's simply not old enough. Author Nicholas Carr made a splash in May by writing about the possibility that Web-skimming actually rewires our brains, while Matt Richtel in the New York Times has claimed that interacting with multiple devices at once just makes us sort of anxious and tired.

What I do know -- based on my own, purely subjective experience of using digital media for almost a decade -- is that it doesn't feel anything like escaping. The capabilities that Kindle lovers extol as having improved their reading experience are, in fact, the very features that make me want to run in the opposite direction. The highlighting. The online "sharing." The ability to just zip on over to Facebook for a minute. Laura Miller has argued eloquently in Salon about reading on the iPad as a serene experience, a sanctuary from the link-surfing that dominates so much of what we read online. And yet, I know what having an iPod has done to my attention span and ability to sit through an entire album, in order, by one artist -- even an artist I love -- and I'll be damned if I let the same thing happen to the way I read. Out of every argument I've heard in favor of e-readers -- no dead trees, portable research, "it's the future," etc. -- my least favorite might be the central point of the thing: the fact that it allows you to choose from thousands of books at any given time. I simply don't want that kind of potential for distraction. Would I have ever made it through any book by Herman Hesse if I'd had the choice, with a press of a button, to lighten the mood with a little Tom Robbins? Will anyone ever finish "Infinite Jest" on a device that constantly presents other options?

For me, to deny books their physical structure simply ignores far too much of what makes them enjoyable. The commitment they require, the way they force you into a state of simultaneous calm and focus -- these are things I have yet to duplicate by any other means. Not to mention other factors that I'm terrified have been lost in the transition from paperback to screen: the mood it puts you in to carry a particular book in your bag all day, or the giddy/strange feeling of seeing your favorites on someone else's shelves.

One recent evening, I wandered into New York's Strand bookstore, where hardcovers still rule, and approached a few employees at the help desk for reassurance. Help, I said. Are real books dying?

One tired-looking employee sighed. "Give it 10, maybe 15 years," he said, thumbing through a publisher's catalog. "Right now, nobody knows what's going to happen. [The Kindle] is going to keep getting better from here on out. Right now it's not something that many people see the need for." Like the Internet used to be? Because that one sort of, uh, took off. He nods. "I mean, I personally don't think it's going to completely take over, make books obsolete." He shrugs. "Who knows?"

"I can't imagine reading anything long on it," chimes in another employee. "Especially for older people, the screen isn't very good. I feel like that would hurt your eyes after a while. It's just not that convenient."

Another employee wanders over. "Are you guys whining about the Kindle again?" Everyone laughs. They work at a bookstore. There are Kindle jokes. "I don't know," he says. "I know a lot of bookstores aren't doing that well, but I think that's more because of online shopping. We're not worried here, I don't think. People who shop here want real books."

Indeed, the store is closing in half an hour and there are still more than 50 customers milling about the Strand's cluttered walkways, maneuvering around overflow carts, asking for out-of-print novellas, and wondering desperately if the fact that the C.S. Lewis book they want is not with the other C.S. Lewis books on the C.S. Lewis shelf means the Strand doesn't have it.

So is my overly personal, defensive reaction to the e-reader boom nothing more than preemptive fear of the future, of change in general? I'd like to think I'm slightly more mature than that, but at its core my visceral hatred of the computer screen-as-book is at least partially composed of sadness at the thought of kids growing up differently from how I did, of the rituals associated with learning to read -- and learning to love to read -- ceasing to resemble yours and mine. Nine-year-olds currently exist who will recall, years from now, the first time they read "Charlotte's Web" on their iPads, and I'm going to have to let that go. For me, there's just still something universal about ink on paper, the dog-earing of yellowed pages, the loans to friends, the discovery of a relative's secret universe of interests via the pile on their nightstand. And it's not really hyperbole to say it makes me feel disconnected from humanity to imagine these rituals funneled into copy/paste functions, annotated files on a screen that could, potentially, crash.

I doubt I'm the only one, even in my supposedly tech-obsessed generation, who thinks this way. Still, it's not hard to imagine that, one day not far in the future, I will find myself on a crammed subway car at rush hour, surrounded only by people who are tapping away at their own individual screens. Maybe, by that point, I will have gotten used to it. Hopefully, I'll be too absorbed in the book I'm reading to care.