Our national love affair with food on sticks

A retrospective of this year's state-fair portable-snack arms race, and theories on why we can't get enough of it 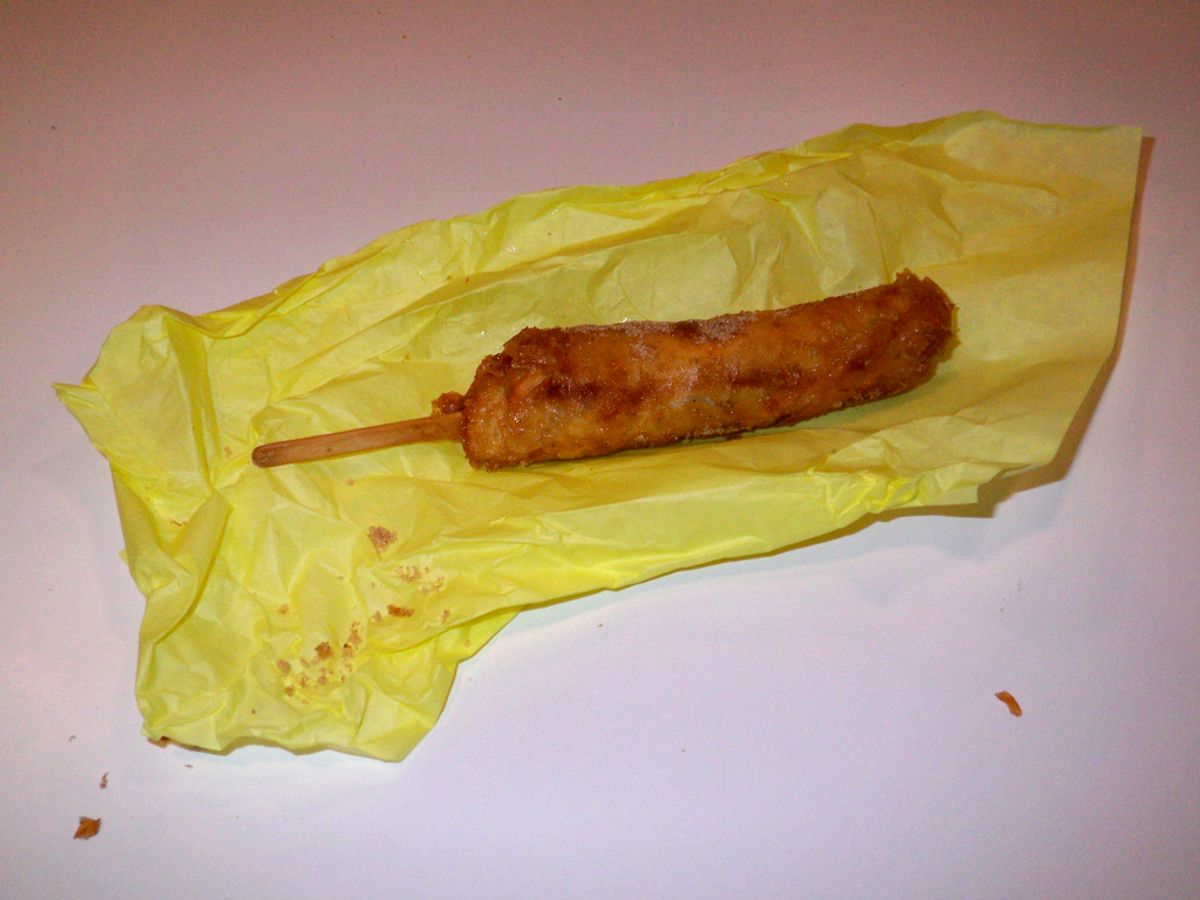 Fried Peach Cobbler on a Stick
--

Now that state fair season, aka summer, is drawing to a close, let us look back at the months-long joust between fairs from Minnesota to Texas, and the rough rivalries therein, vying every year for the title of Craziest Things on Sticks Meant for Human Consumption.

Texas -- whose specialty is fried anything -- put on a spectacular showing this year of pure greasy audacity. The Texans took an innocuous salad, added cheese, ham and bacon, deep fried it and impaled it on a skewer. If there were a prize for impudence, Texas would be an obvious shoo-in.

But this year's overall winner would have to be Wisconsin. What it lacked in cheek, it made up for in creativity. Ponder, if you will, the gravity-defying genius of the Irish-stew-on-a-stick. Not to be flummoxed by the unstickworthiness of the myriad vegetable and meat components of a stew, vendor Slim McGinn's created a pastry shell, stuffed it with braised lamb (and we're guessing veggies), and presented it to us on a stick. Sheer brilliance! Other vendors offered frozen grapes on a stick, spaghetti and meatballs on a stick, and deep-fried cream cheese and bacon on a stick. How's that for good old Midwestern gumption?

Further north in Minnesota, things went a little international. Jamal Hashmi, who operates a food stand in Minneapolis, decided to offer fair-goers a taste of what it's like to be royalty in his native Somalia, via a piece of skewered camel meat. "It's the food of the kings," he told Minnesota Public Radio. Hashmi's menu makes the fair's other offerings – rainbow trout on a stick and deep-fried bologna – look downright pedestrian.

At the Iowa State Fair, visitors were treated to the unfortunately named chicken-lips-on-a-stick -- breaded chicken breast smothered with hot sauce and served with blue cheese dressing. For those looking for something a little less edgy, there was the hard-boiled egg on a stick. There's something to be said for the wholesome, but you have to think someone was just phoning that one in.

On the West Coast, ever the sophisticates in Sonoma County, Calif., the fair menu included impaled deep fried artichoke sandwiches. And at the San Diego County Fair, there was the zucchini weenie, perhaps the most disturbing food-thing ever to go on or off a stick. A hollowed-out zucchini that's been stuffed with a hot dog and -- naturally -- deep fried, the zucchini weenie honestly seems like a perversion of nature. We can only say that God did not intend for the zucchini to be used in this way. And yet, you have to imagine that is exactly why it exists.

So what is it about edible things perched upon long sharp things that make us want to eat them? What is their magical and mysterious allure?

Andrew Smith, a food historian at the New School, believes that stick foods are perhaps the last remaining examples of a world where food used to be fun. "We take food so seriously these days. Stick foods are novel and they make us smile," he says. Brian Wansink, author of "Mindless Eating" and director of Cornell's Food and Brand Lab, agrees. "It's a sense of adventure. It takes something familiar and makes it exotic," he says. Because, as we can see with the Irish stew, the defiance of gravity is nothing if not exotic.

There's a primal appeal to eating food on sticks, too, that's not unlike eating a chicken leg. The skewer is a proxy bone; and you are victorious over your prey. For a more civilized -- and social -- explanation, there's also an appeal to the portability of food that you hold but not exactly in your hand: It's easier to share. Without your hands touching it, like a sandwich, the sense of individual ownership over the food isn't so intimate. And, unlike plated food, you can easily walk around with it, presumably running into some friends who, why yes, would love a bite of fried salad because they hadn't gotten in their vegetables for the day.

Besides, says Smith, you might be more willing to eat something that's unhealthy because it's on a stick. For one thing, you don't really have to look at it -- or think about it -- once it's in your hand. Unlike food lying before you on a plate, the angle of the skewer is usually poised so that you really only see the next bite. There's an instant ridding of the guilt that may otherwise come with ordering a plate of deep-fried cream cheese stuffed with bacon at a restaurant. And it's notable that these monstrous offerings come out at state fairs, which don't come around very often. So there's a sense of occasion that surrounds its arrival, automatically making you more willing to indulge yourself.

But all of this is speculation, and with the fairs all finished for the year, we'll have 10 more months to theorize ... until the vendors break out their masterpieces next year.