If the GOP wins, let the back-stabbing and infighting begin

Sure, Republicans in Congress seem unified right now. But let's see what happens if they win this November 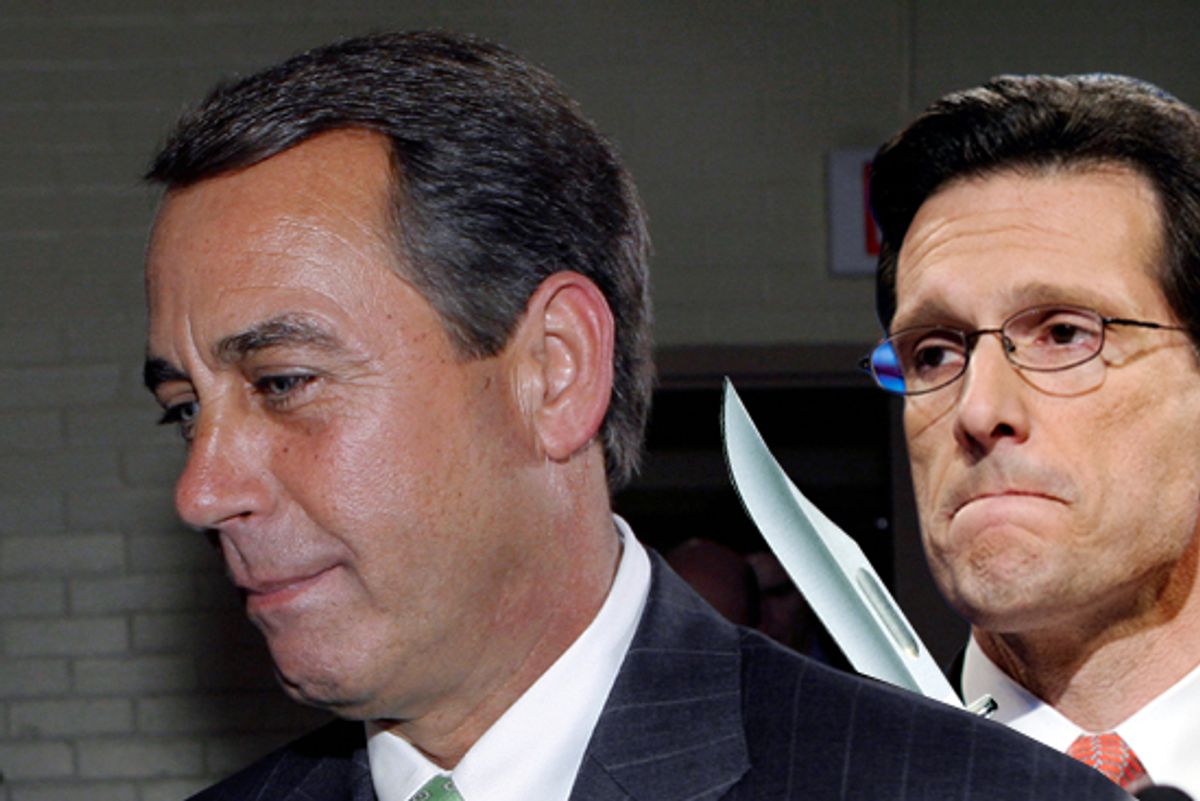 If there's been one dominant message in the media this week, it's this: Democrats are screwed. Really, totally and thoroughly screwed.

Granted, we've been hearing some variation of this message all year. But it's acquired new urgency with the release of a Gallup poll that shows Republicans leading Democrats in a generic congressional ballot test by 10 points -- the biggest GOP advantage ever measured in the poll -- and a new projection from Larry Sabato, the election forecaster from the University of Virginia, that Republicans will gain 47 House seats this fall, more than enough to take back the chamber. And Nate Silver has upgraded the likelihood of a Republican Senate takeover to 20 percent -- a startlingly high number when you consider how many seats the GOP needs to pick up to pull it off.

Whether November will actually prove quite this gruesome for Democrats, I still have my doubts. The Tea Party has forced politically toxic nominees on the GOP in a handful of key Senate races -- candidates who would be certain losers any other year and who may well fall short even in this one. Plus, for all their troubles this past year, haven't Democrats proven something by winning special House elections in some very GOP-friendly districts?

But let's put the skepticism aside, buy into the panic, and stipulate (for now) that the Democrats will lose both the House and the Senate this November. This might just be where the fun begins -- at least if you're a fan of Republican infighting and back stabbing.

Fissures within the House and Senate GOP ranks have not been easy to spot since Barack Obama became president, with Republicans aligning in uniform opposition to virtually every major administration initiative. But among the party's leaders in both chambers, there are some serious personality, policy and strategic conflicts -- conflicts that figure to become more apparent if the GOP takes power.

Start in the House, where John Boehner, the GOP leader, can hear the footsteps of Eric Cantor. The two men don't care for each other and have been in an uneasy alliance since Cantor became the party's whip, currently its second-ranking spot in the House, after the 2008 elections.

Cantor, who at 45 is 15 years younger than Boehner, will soon be releasing a book called "Young Guns: A New Generation of Conservative Leaders," co-written with Paul Ryan and Kevin McCarthy, two other House Republicans who are also significantly younger than Boehner. The book will be out on September 14, boosting Cantor's national visibility just as Americans begin focusing more on politics. The potential for Cantor to steal the spotlight from Boehner was apparently not lost on the current GOP leader. As Politico reported recently:

This is classic Cantor: a hyperambitious move to publish and push ideas he thinks will help rebrand the GOP, on his terms -- and not necessarily those of his boss, Minority Leader John Boehner.

If this were an isolated incident, it would pass without a peep. But it’s not: Cantor is earning a reputation for pushing his ideas so hard and so often that some GOP colleagues are questioning his motives. Is he guided by a burning desire to help the party -- or to boost himself?

This opens the door to plenty of potential mischief if Republicans do reclaim the House. Presumably, Boehner will be elevated to speaker -- it's impossible to see Cantor toppling him just after an election that Republicans perceive as a triumph. But that also means that Cantor should have no trouble grabbing the No. 2 slot, majority leader. And given his ambition, it's not likely he'll be content to hold that spot for very long, especially if he doesn't believe Boehner has any real sense of where he wants to lead the party. Indeed, while Cantor is releasing a book outlining his concept of conservatism, Boehner has struggled to produce a coherent blueprint for what Republicans would actually do with a House majority.

This is not the recipe for a healthy leadership team. Any majority the GOP wins this year will be a narrow one -- subject to being tossed out in the '12 elections. That will only make Cantor and his "young gun" allies more impatient with Boehner's leadership, and more likely to undermine him. Boehner, of course, knows something about how this goes. After the 1994 GOP revolution, he earned the No. 4 slot in the House Republican leadership -- but four years later, amid complaints that he communicated poorly with members and botched the party's message on television, he was ousted in a coup and replaced by J.C. Watts.

Things may be just as fun on the other side of the Capitol. No, Mitch McConnell isn't in any danger of being ousted as the Senate's GOP leader. But he faces the very messy prospect of having to deal with a new batch of Tea Party-friendly ideologues -- far-right absolutists who won't be afraid to exercise the (considerable) prerogatives of a senator, even if it puts them at odds with McConnell.

And these Tea Party senators -- their ranks could include Marco Rubio, Sharron Angle, Rand Paul and Alaska's Joe Miller, among others -- will have a leader of their own: South Carolina's Jim DeMint. That's the same Jim DeMint who endorsed Paul over McConnell's protégé in Kentucky's Senate primary earlier this year.

DeMint and his fellow Tea Partiers represent a vocal segment of the GOP base: conservatives who were originally attracted to the party by its emphasis on low taxes and small government but who have watched too many party leaders in D.C. compromise on those principles. They’ve made excuses for decades, as Ronald Reagan, George W. Bush and Republican Congresses expanded government and racked up massive deficits, but they're not willing to abide it any longer. And in McConnell, many of them see a 26-year incumbent who essentially personifies the D.C. Republican establishment.

In an interview this week, McConnell stressed that the Senate is likely to include several moderate Republicans next year, like Delaware's Mike Castle and Illinois' Mark Kirk. This may be true, but it will only make matters worse for the GOP leader if Republicans control the Senate. Uniting a Mike Castle and a Rand Paul is fairly easy now; you can concoct a moderate rationale for opposing Obama's agenda just as easily as you can concoct a conservative one. But if it's up to Republicans to advance an agenda of their own, or to work with the White House? Then the daylight between the Castles and the Pauls becomes problematic.

To be sure, DeMint will still have some new allies next year even if some of the Tea Party candidates lose this fall and even if the GOP falls short of a majority -- just as Boehner will still face a threat from Cantor if the party fails to win the House. (Actually, in that circumstance, the threat to Boehner will probably be worse.) But if the Republicans win both chambers, they'll suddenly own the spotlight on Capitol Hill -- and that's when Americans might start noticing that they aren't quite ready for prime time.