More taunts to the Democratic base

Emanuel drops another F-bomb on a progressive ally, while Alan Simpson blames some veterans for our budget woes 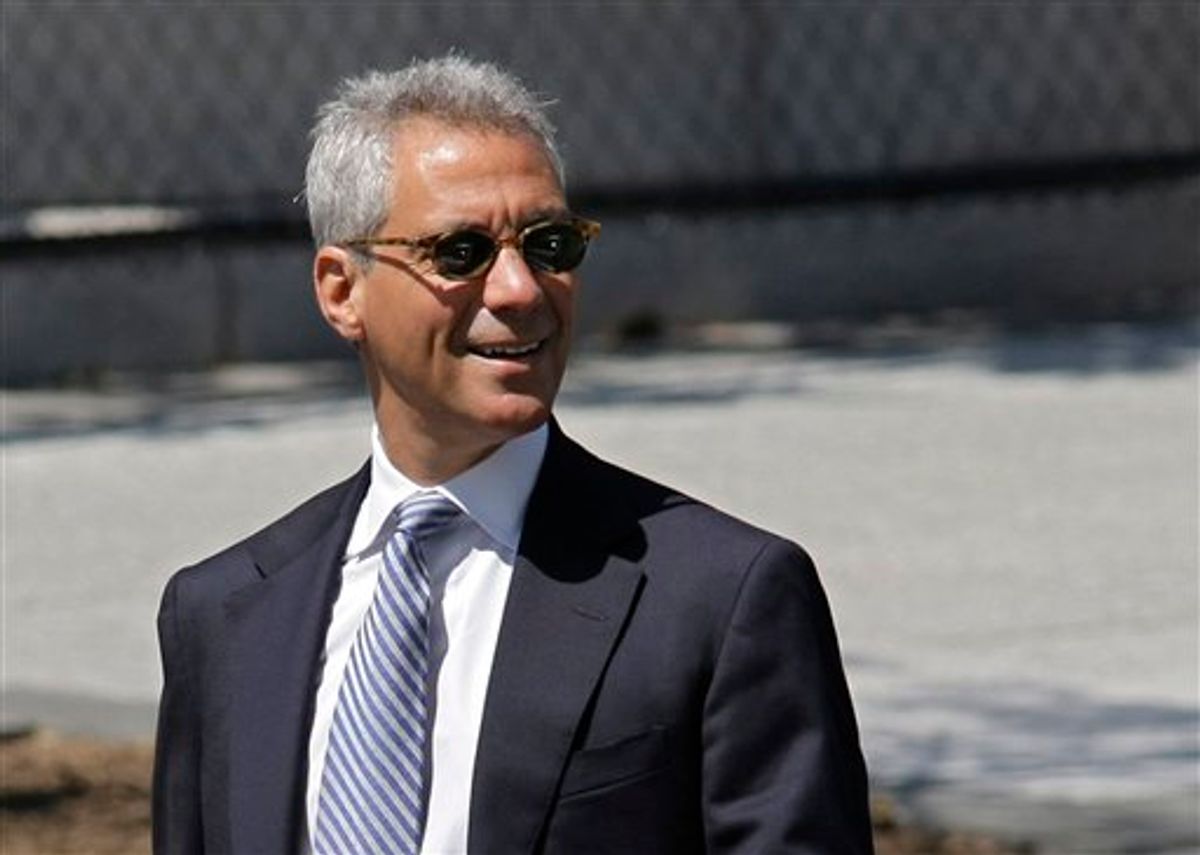 In this April 11, 2010 photo, White House Chief of Staff Rahm Emanuel walks along a driveway at the White House in Washington. Emanuel says "it's no secret" he'd like to run for mayor of Chicago someday. Emanuel made the remark during an interview on Charlie Rose's PBS talk show, which aired Monday April 19, 2010. (AP Photo/J. Scott Applewhite) (AP)
--

And former Sen. Alan Simpson, the Republican appointed by our Democratic president to chair his "fiscal commission" – I love the way it's become commonly known as the "catfood commission," since so many members favor cuts to Social Security, raising the old specter of seniors eating catfood -- has stepped in it again. Fresh from disparaging Social Security as "a cow with 310,000,000 tits," on Wednesday Simpson complained that American military veterans exposed to Agent Orange are hurting the country by using the program established to help them with health troubles related to the wanton use of that defoliant in Vietnam. [UPDATE: I got carried away with the number of tits in Simpson's quote. Thanks to readers for dialing me back.]

"The irony (is) that the veterans who saved this country are now, in a way, not helping us to save the country in this fiscal mess," Alan Simpson, co-chair of the White House's fiscal commission, according to the Associated Press.

No, Mr. Simpson, the irony is that a Democratic president elected with 8.5 million more votes than Republican John McCain put you in charge of his fiscal commission, and now, as his party heads into midterm elections, it's facing a profound "enthusiasm gap" between fired-up Republicans and the Democrats who elected President Obama, largely because the president, even while getting much of his agenda passed, has so frequently caved on core issues (I talked about this today on MSNBC's "The Ed Show; video below.)

If you haven't seen it already, Public Policy Polling today released a report showing that in 10 key races – governor and senate races in Illinois, Florida, Missouri, Pennsylvania and North Carolina – the Democrats' woes aren't about Obama supporters peeling off to back Republicans; they're due to the likelihood that many won't vote at all, and turnout won't be anything like it was in 2008. Now, midterm election turnout almost never matches that for presidential races, but there is likely to be a particular drop this year.

But it's of some concern that three of the groups with whom the president's ratings have dropped most precipitously are Latinos, young(18-t0-29) voters and white union members. Those groups gave Obama two-thirds of their votes in 2008, and they’ve all registered sizeable dips in their approval of Obama since then, as well as in their stated intention to vote. I hadn't realized this: In 2008, 57 percent of white men favored McCain, but 57 percent of white male union members favored Obama. Even after all that talk about "racist" white working class voters only going for Hillary Clinton, the union vote came through for Obama, but its support is waning as the president appears paralyzed on a plan to attack unemployment.

Panic not, there's a lot of time before November. I get all the emails from Organizing for America, so I know they're working hard to mobilize their voters, and maybe they'll turn things around before November. Labor Day opens the traditional political season, and President Obama is spending it with the AFL-CIO, where he'll probably have to make amends for his staffers who've used the F-word about their union allies and also called them stupid for spending money to try to beat Blanche Lincoln in Arkansas. But maybe he'll find the partisan, populist voice he had last Labor Day in Cincinnati – and maybe this time he'll keep it.

Speaking of Labor Day, on Monday I'll have an interview with Jefferson Cowie, author of the best book I've read in a long time: "Stayin' Alive: The 1970s and the Last Days of the Working Class." Come prepared to read about the death match between unions and the New Left that devastated progressive politics through today, as well as about John Travolta in "Saturday Night Fever," Bruce Springsteen, and where disco fits in the story of class struggle. Watch for it!