"A Woman, a Gun and a Noodle Shop": "Blood Simple," Hunan-style 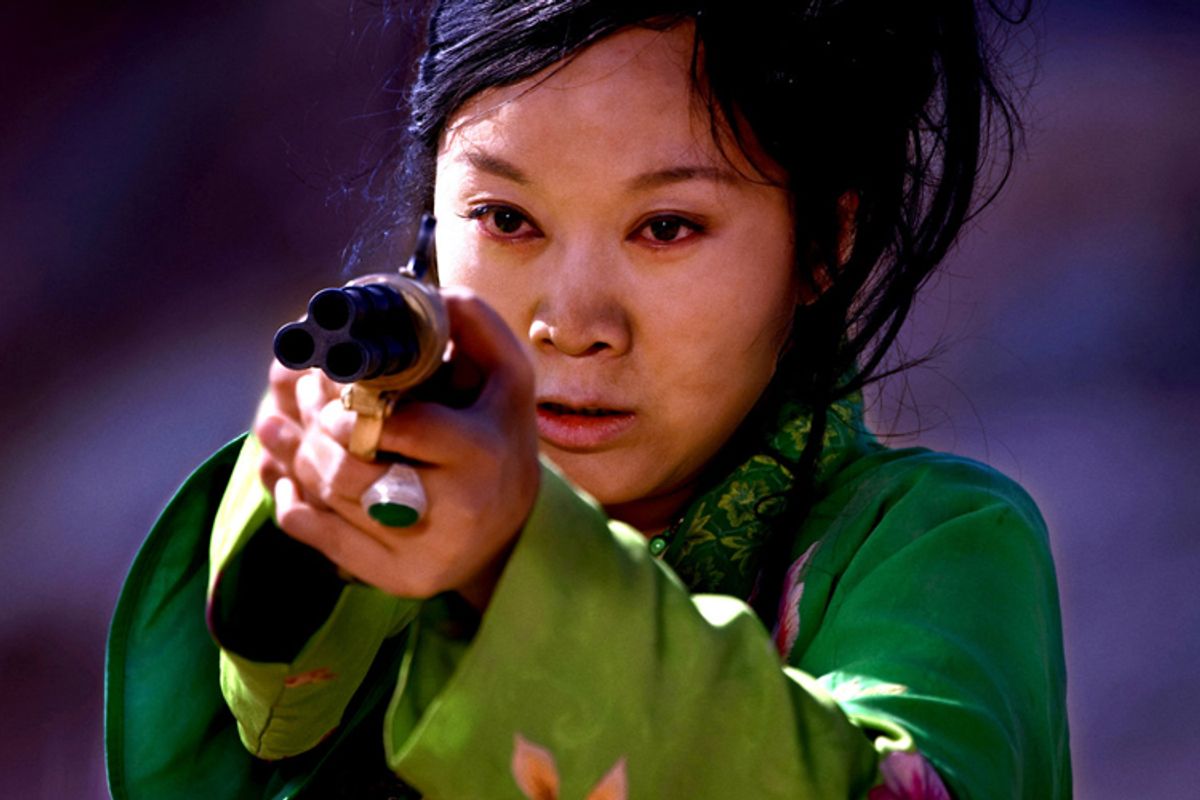 There may be no way to get you interested in Chinese filmmaker Zhang Yimou's "A Woman, a Gun and a Noodle Shop" without making it sound like a minor and weird imitation of something else, rather than the ingenious if artificial creation it actually is. So let's get it over with: Zhang, an operatic visual stylist who has directed "Hero" and "Raise the Red Lantern" and numerous other international art-house hits in a career that reaches back to the '80s, has now made an oddly faithful remake of "Blood Simple," the American indie hit that marked Joel and Ethan Coen's 1984 debut.

But whatever you think that sounds like, "A Woman, a Gun and a Noodle Shop" probably isn't anything like that. Zhang has taken the basic botched-murder plot of "Blood Simple," along with its grotesque slapstick elements, and translated it from one kind of movie -- and one kind of world -- into another. Instead of the classic American film noir universe, full of dumb people doing bad things (and vice versa), we're in the highly stylized 19th-century universe of Chinese genre films, with elaborate costumes, a self-evidently phony setting and archetypal characters out of Beijing opera -- the wicked older husband, the scheming wife, the young coward, the funny-looking buffoon.

Beyond that, Zhang has supercharged this comic-gruesome fable with ultra-vivid colors -- brilliant blue skies, spectacular striped mountains, gold and red fabrics --and a hyperactive, cartoonish energy. While the cast of losers at his remote desert noodle shop plot their murders and robberies and adulterous getaways, you expect Wile E. Coyote and the Road Runner to come zipping past. Other critics have already compared "A Woman, a Gun and a Noodle Shop" to the slam-bang European surrealism of Jean-Pierre Jeunet ("Amélie," "Micmacs," etc.), but that may be accidental convergence, or just the widespread cultural influence of Warner Bros. and Hanna-Barbera cartoons.

I haven't gone back and compared "Woman/Gun/Noodle" shot for shot with "Blood Simple" or anything, largely because I don't even want to know that kind of person, let alone be one. But despite the radically different context, it's definitely the same story, with the same quadrangle of ruthless characters, the same missing gun, ransacked safe and troublingly undead corpse. Wang, played by the leading Chinese theater actor Ni Dahong, is the bitter and miserly proprietor of a noodle shop that sits all by itself on the edge of a desert mountain range. (This is the Dan Hedaya character, Marty, in "Blood Simple.") His unnamed femme fatale wife (Yan Ni, in the Frances McDormand role) is sleeping with the handsome but spineless Li (Chinese comedy star Xiao Shenyang, in John Getz's role) and plotting her revenge for all Wang's abuse.

But you don't have to have seen "Blood Simple," or even heard of it, to grasp that all these people's hopes and dreams are likely to come to nothing in this Godforsaken place, or that when Wang's wife buys a gun from a ludicrously attired Persian merchant (who resembles the Ali Baba encountered by Popeye the Sailor), it isn't going to be used for any good purpose. Then there's Zhang (Sun Honglei), the laconic patrol officer clad head to toe in blue armor, who represents imperial law and order out here on the frontier but is looking out for his own interests first and foremost. (This is M. Emmet Walsh's nefarious private dick, Visser, in "Blood Simple.") Wang hires him first to follow and then to kill the cheatin' couple, but Zhang doesn't care about them, and has his eyes on the much bigger score in the noodle-shop proprietor's safe. (You can throw in goofy, bucktoothed Cheng Ye in the comic-relief role originally played by Samm-Art Williams.)

Alternately comic and terrifying, "Woman/Gun/Noodle" is a dazzling act of transliteration that may not require knowledge of the original film -- but will surely be most amusing to fans of the Coens' movie, as a measure of how far you can change context, both cultural and cinematic, while still telling the same story. What prevents it from being more than a stylized and rather cruel fable is exactly what prevents "Blood Simple" from being more than that. It's preaching an almost nihilistic lesson about the absurdity of all human lust and endeavor, with perhaps a side reference to Jesus' famous maxim about the root of all evil. (I'm sure a similar sentiment can be found in the Confucian tradition.) The idea that human life is brief, misconceived and largely driven by meaningless concerns has the virtue of compactness (and arguably also of truth). But it isn't exactly expansive or illuminating, and it leaves you with few options beyond wisecracking as you die, the way one character so memorably does in both these movies.

OK, that's almost certainly asking the wrong question. With the Coens' films, the subject matter is almost always secondary to the technical excellence, the eccentric performances and the creative verve. That's equally true in "A Woman, a Gun and a Noodle Shop," anchored in its electric-blue skies, its slapstick gags, and the contrast between the vampy Yan Ni and the expressionless Eastwood gaze of Sun Honglei. There's a lot of strange delight in this film's journey, and there's no use getting all worked up over the bleakness of its destination -- we're all heading that way anyway.

"A Woman, a Gun and a Noodle Shop" is now playing in New York and Los Angeles, with wider national release to follow.