"The Hunger Games" vs. "Twilight"

Which young-adult crossover hit series has the most empowered heroine? You'd be surprised 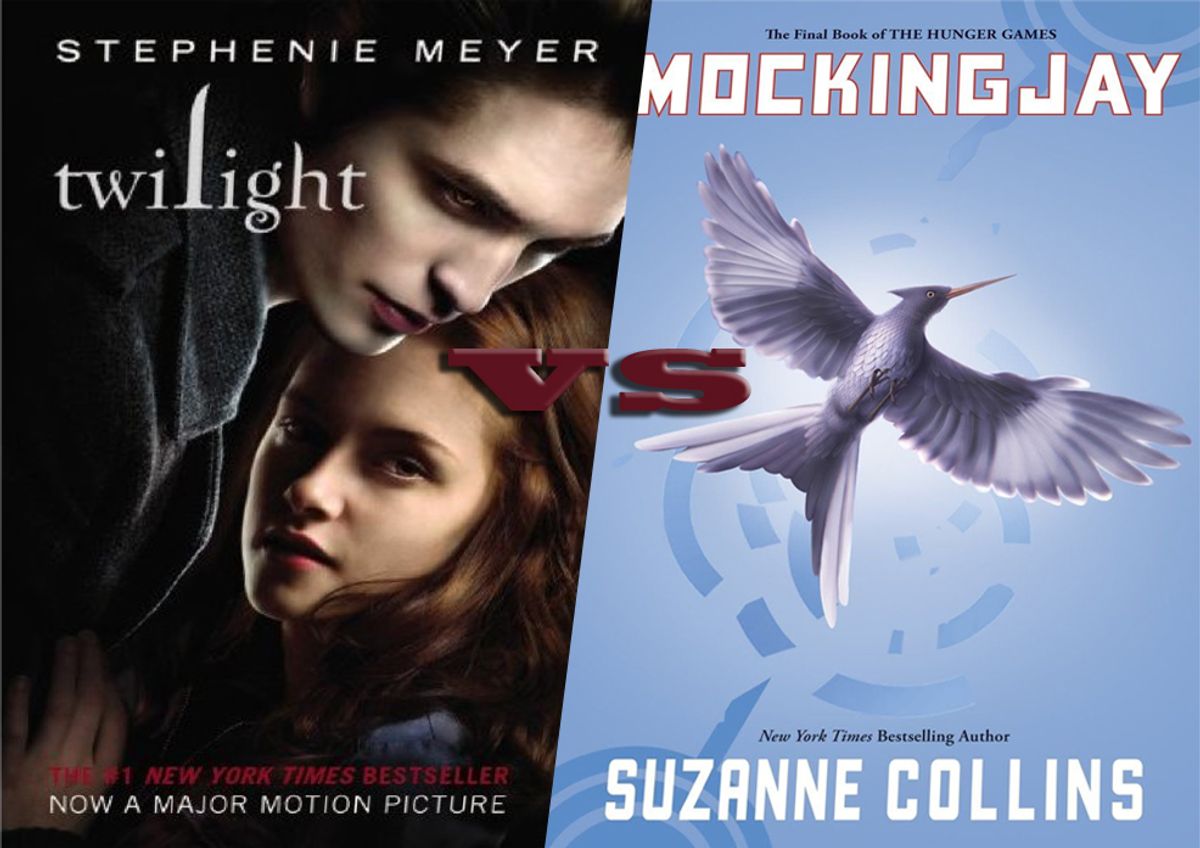 Is Katniss Everdeen the antidote to Bella Swan? That's a question guaranteed to irk fans of "The Hunger Games," Suzanne Collins' trilogy of dystopian young-adult novels, the latest of which, "Mockingjay," has currently captured the No. 1 spot on the nation's bestseller lists. "Hunger Games" fans don't appreciate seeing Collins' far more sober and ambitious books likened to "Twilight," Stephenie Meyer's swoony vampire romances. Too bad, because so much about "The Hunger Games," from its crossover success with adults to the crowds who packed bookstores when "Mockingjay" went on sale at midnight on Aug. 24 to its teenage narrator with her tangled love life, prompts the comparison.

As for Katniss, she is in many respects an improvement on the passive, besotted Bella. For the uninitiated, "The Hunger Games" takes place at some point in the distant future. A decadent central authority, the Capitol, rules over 12 utterly subjugated districts. Rather gratuitously, the Capitol flaunts its power by forcing each district to send two of its children as "tributes" to an annual reality-TV competition, the Hunger Games, in which all 24 contestants must fight to the death in a vast outdoor arena. When Katniss' little sister gets picked as one of the tributes for District 12, Katniss volunteers to go instead. Having spent much of her youth sneaking into the wilderness outside District 12's borders to hunt for game to feed her family, Katniss is far better suited to survive the games.

The differences between the two heroines are marked: Bella Swan is clumsy and largely helpless, a rescue object for Edward and Jacob, the werewolf who vies with the vampire for her affections; Katniss is a tough and competent woodswoman and sharpshooter. Bella is willing to give up everything -- her family, friends, previous life, even her humanity -- to dote on her beloved Edward for eternity; Katniss sacrifices herself for her mother and sister. Bella is one long, quivering bowstring of frustrated lust (at least until the fourth book in Meyer's series); Katniss, about the same age, is unstirred by adolescent hormones, despite the two cute, sweet guys who proclaim their love for her. She may be enmeshed in the kind of romantic triangle that leads fans to don Team This Guy or Team That Guy T-shirts, but the boys' attentions mostly make her unhappy. Her tender feelings for them leave her even more vulnerable to the cold, manipulative authority figures who provoke her strongest passion: righteous anger.

So, yes, Bella and Katniss are very different. You even could view their stories as embodying the two major value systems of Western culture, the Romantic and the Classical. Bella, a slave to forbidden love, regards intense feeling as the ultimate truth. Collins, more culturally literate than Meyer by far, has loaded her trilogy with classical references (the tributes themselves were inspired by the myth of the minotaur; many of the Capitol's residents have Roman names) and given us a heroine preoccupied with duty and justice -- a chaste archer like the virgin goddess of the hunt, Artemis. If "Twilight" is all about love, then "The Hunger Games" is all about power, and the violence used to secure it.

One thing you can say about Bella Swan, though: She knows what she wants. For the two books leading up to "Mockingjay," Katniss acts decisively and often effectively, but only when she's backed into a corner. She's forced to participate in the games; compelled to act out a romance with her fellow tribute, Peeta, for the viewing audience and strong-armed into the publicity campaign expected of victors by threats against those she loves. Her behavior is understandable, but never freely chosen. "I'm not just a piece in their game," is her habitual refrain, but except for a few climactic and highly circumscribed moments, she's often just that. What does Katniss really want? It's hard to say.

The fact that many of the things Katniss is forced to do are rather enjoyable is both a lovably goofy trademark of the franchise and a bit troubling. No "Hunger Games" novel would be complete without at least one lavishly detailed makeover scene in which Katniss' devoted "prep team" transforms the grumbling District 12 bumpkin into a mediagenic glamourpuss, and presents her to an adoring audience. You'd think that once she finally escapes the Capitol and its games to hole up with rebel forces in District 13, Katniss will be permitted to lapse back into tomboydom, but no dice; the rebel forces enlist her for propaganda purposes, and hand her over to yet another prep team. "I'm on page 41," a friend texted me the day he got his copy of "Mockingjay," "and she's already got a new outfit."

Granted, it would be hard to countenance a heroine who actually wanted to participate in the Hunger Games, as some tributes in the first book of the trilogy do; since winning entails killing other children, a Katniss who embraced the competition would be a monster. But when it comes to the beauty treatments, fame and influence, the lady doth protest too much, methinks. How often does someone not only attain but hold onto a position as a galvanizing public figure without meaning to? Katniss expresses leery cynicism about the rebels' plans to rework her into a celebrity revolutionary, but it's hard to be as good in a role as she is when your heart isn't in it.

Underlying Katniss' unacknowledged mixed feelings is the trilogy's own profound ambivalence about desire and power. In some ways, Katniss is more passive than Bella, allowed to have all kinds of goodies but only if she demonstrates her virtue by not really wanting them in the first place. At the beginning of "Mockingjay," Katniss seems to finally break out of this bind by making a free, affirmative choice to don the Mockingjay costume for the rebel broadcasts. In contrast to the Capitol, the rebels won't force her to perform, and despite certain similarities in style, Katniss is no brainwashed Patty Hearst. "We can't go back," she tells one of her admirers when she decides to actively back the uprising, "Death to the fascist insect that preys on the life of the People!" -- no, wait: that last bit was Patty Hearst. And then, at last, she asserts the one thing (besides being left alone in the woods) that she truly desires: revenge. In a startling departure from character, she demands the right to kill the evil president of the Capitol herself.

No surprise, this leads to pages and pages of highly imaginative, video-game-like carnage followed by coda full of mournful ruminations on the folly and tragedy of war. It's a little like an orgy movie that concludes with the characters deciding that they prefer monogamy after all. Part of this is a classic American ambivalence: We love violence, fame, the media and wealth -- all of the apparatus of power -- even if we claim to disapprove of these things. Our pop culture narratives invariably default to violent resolutions, but not before explaining that the hero had no other option than to blow the bad guy away in a climactic smackdown-plus-explosion. It was self-defense! An accident! Saving the world! He drove me to it! I didn't want to -- I'm not that kind of guy. He made me!

But this sort of passive-aggressive emotional logic is not unfamiliar to certain romance novels, either: The hero makes the heroine accept what she craves while she gets to deny how much she craves it. Need I add that this demonstrates a twisted attitude toward female desire?

If Katniss sought to be the center of attention, if she chose to string along two handsome young men more than willing to give their lives for hers, if she wanted to have her every movement photographed and admired, if she dreamed of leading the revolution, if she longed to compete and to win -- if she had any ambition at all -- she would be a bad girl by such a standard. Perhaps we'd be scrutinizing and critiquing her character the way so many of us (myself included) have dissected Bella Swan's. For all her irritating flaws, Bella, at least, has the courage of her desire. For what, besides a well-earned vengeance, does Katniss Everdeen truly hunger?