Making peace at my ex-husband's Seder

We fought in court over the role of religion in our children's lives. Now, it was time to let it go 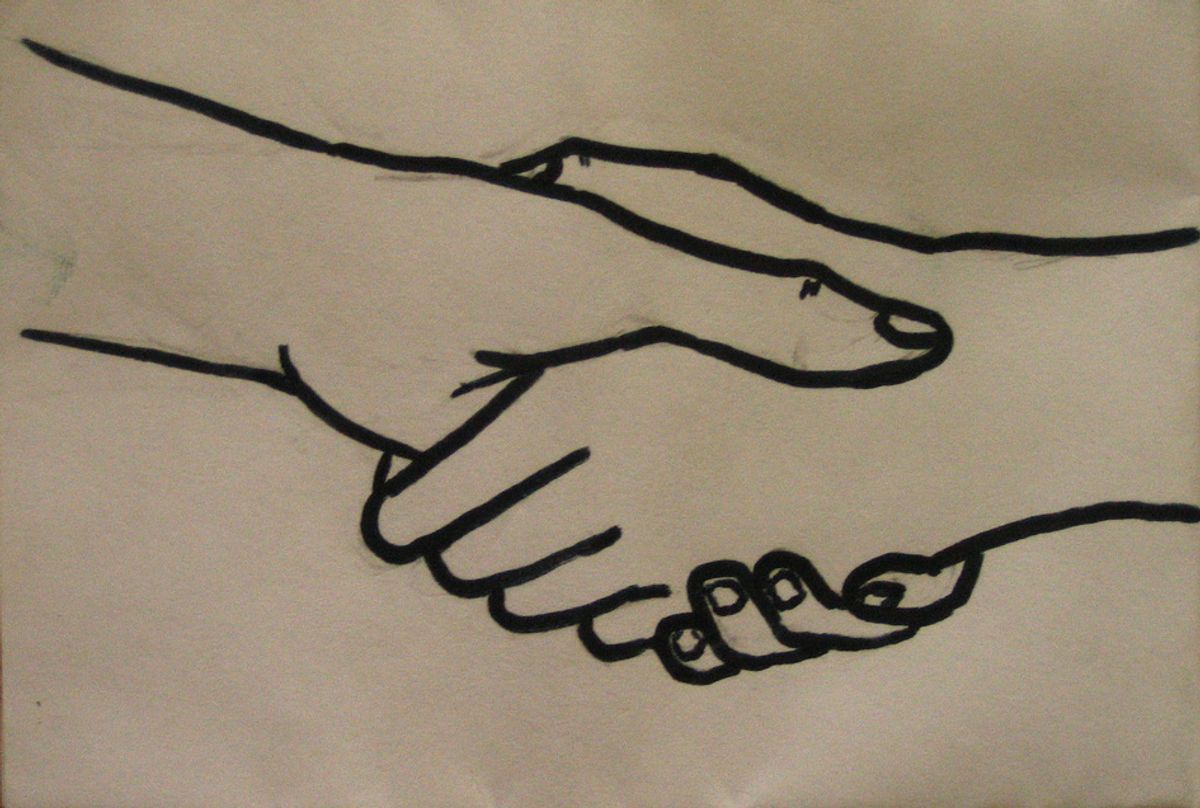 I rang the doorbell of my ex-husband Larry's house, a jar of gefilte fish in one hand, boxed coconut cake in the other. To date I'd been to the house on Thunder Lake only to drop off the kids. But today I was here with my husband, Eric, and two stepchildren, Luke and Jamie, for Seder dinner.

Given the circumstances, this was miraculous; I'd last seen Larry three weeks ago at the trial. Six years after our divorce was final we'd gone back to court over the religious upbringing of our three young children, Sophia, Olivia and Johnny. I'm Catholic; Larry is Jewish.

Eric, Luke, Jamie and I stood on the front steps. I did not want to ring the bell again. "Cool house," Luke, 13, said, looking heavenward to where the white columns we stood between might end.

"For the children," he said, taking the jar of gefilte fish and squeezing my hand.

Eric had been here for me each odd step of the journey. He'd been at the first meeting with the rabbi more than a year ago, where I sobbed, explaining I was the primary caretaker of my baptized children, and I could not raise my children Jewish.

Sophia, my oldest daughter, just 12, answered the door, welcoming me as a guest in her other home. The divorce agreement said nothing about religion, so Larry and I tried to figure out Sophia's faith in real time. Each decision we made would mark her, and be the precedent for her sister Olivia, 10, and brother Johnny, 6. But looking at Sophia, I knew Larry and I had not damaged her permanently yet. She stood with ease in the foyer. She'd grown into a beautiful girl, her father's dark eyes, my mother's wide-lipped smile, her mane of black hair a gift from some former generation.

Now in a house where my children lived when they were not with me, images of their life with their father came into view, the backpacks on each hook, three jackets hung in the closet, a drawing with the words "I love my Daddy" in a frame on an end table.

I remembered a 5-year-old Sophia in the tub with her little sister just after the divorce. The girls played in the bath bubbles, splashing suds onto their chins Santa-style, and spun the rubber ducks on the surface of the water, like dreidels, singing in Hebrew. That was how I first found out that Larry had been taking the children to Temple on his weekends. He had never taken the children to Temple in the eight years we were married.

I had fallen in love with Larry at a Seder at his house when we were dating. I'd grown up in a cloistered Irish-Italian family, a plaid-uniformed Catholic schoolgirl. I had never been to a Seder and at that one I met a Buddhist and a Muslim. As the conversation developed into a theological discussion, my mind stretched past Sister Marianne McCarthy into the realm of rabbinical texts, the Tipitaka, and the Quran. My world cracked open over a candlelit table with plates of beef brisket and roast turnips. My husband-to-be was worldly, 15 years older than I, and seemed to believe in all religions, subscribing to none.

We walked to the main room. "I come bearing gifts," I blurted, handing Larry the gefilte fish and coconut cake. Several children raced through the house and a few other couples greeted us. I knew one woman from the gym. "It's so nice how you all get along," she said, nodding toward Larry, then Eric. "So nice how you're all here," she added, her words echoing beneath the cathedral ceiling.

All of us getting here was a long story. One that began with a two-sentence e-mail I received 18 months earlier stating Sophia was enrolled in Hebrew school and her bat mitzvah was set for June 12.

My ex-husband's e-mail, in its brevity, seemed a decision to change the course of my children's lives without discussion. It set off a series of sparks that turned into blue-flamed anger, then action; two motions filed within two weeks, followed by a trial.

In court I sat on the bench with my lawyer, waiting for our case to be called. I shuffled papers, my hands shaking, the children's baptismal certificates fluttering to the floor. Larry sat several rows in front of me, with a string of witnesses shoulder-to-shoulder.

Larry's lawyer called me to the stand. I swore to tell the truth and nothing but the truth. I considered another oath I'd made before Larry, to love you in sickness and in health all the days of our lives.

The lawyer fired off questions.

"Do you know how long the children have been attending Temple?" he asked. "Have you ever taken any legal action up until now?"

I hated him, catching me on a hook like that. No, I had not taken legal action, but I had built a case with Larry outside of the court. We'd tried to talk, but the words crisscrossed before ever being heard. The talking turned into pithy e-mail exchanges, what we each thought the other's  intent was for the religion of the children when they were born. I believed we'd agreed the children would be raised Catholic and Jewish. My problem at this juncture really boiled down to a bat mitzvah. A ceremony that would confirm my daughter in the Jewish faith, somehow separating her from me.

"Are the children presently enrolled in any other religious instruction?" the lawyer continued, tension in his voice. I thought back to my enrolling Sophia in CCD when we first moved, and how I pulled her out three weeks later. The change in homes and schools was stress enough for both of us. And I thought the allure of taking three kids to Temple would wear off for Larry.

Larry's lawyer repeated the question. "Are the children enrolled in any other religious instruction?"

I began to explain the three-week enrollment.

"Answer yes or no," the judge said.

"When was the last time you went to church?" the lawyer asked. "Christmas?"

Sophia's Hebrew school teacher came to the stand next. I had never seen this woman before. She addressed me from the stand: "Did I know Sophia already knew her Torah portion?" she asked. I did not know. That was the problem. Somehow this all happened in secret, on the one day a week the children spent with their father. The lawyer finished the show with a former next-door neighbor, who confirmed that, yes, he and his wife had attended Seders in the marital home.

Court was adjourned until a date two weeks from that day. Two more weeks. It would be unbearable.

My lawyer walked me to my car. I locked myself in, tears dripping from my eyes onto the leather seat. My mind reeled back to my childhood, me in that white dress at my First Holy Communion. I had memorized the Our Father and the Hail Mary. I'd taken the Body of Christ for the first time and had gotten stomach sick. Years later I would say my Hail Marys in succession after confession with Father Amato, where I begged forgiveness for my 16-year-old sins.

Though I'd grown up with God, that confession would be my last in a formal setting. Once I went off to college and was away from parents who did not know if I went to church or not, I opted to not. By the time I met Larry after college my faith was packaged into silent prayers at night, the ongoing giving of thanks in a private setting. I married Larry within 12 months of meeting him the first time. We divorced eight years later, to the day.

Larry and I both lost so much in the divorce. But afterward, I found Eric, and I wondered now, for the first time, if Larry found religion. Perhaps Larry was not just pushing his Judaism to control me, but he'd come to believe in it. While I reestablished my roots in an expanding family, with Eric and my children and stepchildren, Larry may have found the roots of his faith. Darkness fell, and all the other parked cars had gone. I tapped out the number of years Larry had been taking the children to Temple and Hebrew school. I tapped seven times on the steering wheel. It had been seven years.

I put the key in the ignition, wondering for the first time if I should let Larry win this one. I told myself that whether or not the children were mitzvah'd, they would choose for themselves one day. Unlike in my house where Christianity had been a given, never questioned, my children would have to think things through as they grew older. Even with a bat mitzvah, Sophia would have to question the two faiths that were rolled up inside of her.

In the morning I called my lawyer. "Settle," I said.

Later that week, after my ex-husband heard of the settlement, I received an e-mail invitation to Seder at his house. "Please bring Eric and Luke and Jamie," he wrote. I thought about the invitation for more than a week and decided it would be best for the children if Larry and I at last appeared to be on the same page.

I took in the scene before me now, Sophia pulling out the Scrabble game, Olivia trying to hide the afikomen while everyone watched. I went to the kitchen to pour a glass of wine and found myself alone with Larry in the kitchen. "It's a nice party," I said.

"I'm glad you're here," he said, taking the Seder plate from the refrigerator, the boiled egg rolling off onto the tile floor.

"Need help?" I asked, picking the shank bone off the counter.

"Remember that Seder when you tried to bake shehokal?" he said. In a minute I was back in another kitchen, separating 13 egg whites, completely baffled at how to make a dessert without flour.

"I remember," I said, the moment between us tacked to the corkboard, held still for us to observe. We were joined in a singular memory, from a time when we would have done anything for each other.

Our youngest son, Johnny, age 6, came into the kitchen, the moment broken. "Come see my room, Mom," Johnny said, taking my hand. I looked at Larry as if to ask if it was OK for me to go upstairs. He nodded, and Johnny scooted me away taking the steps up to his room two at a time. "Here's my bed," he said, a 6-year-old docent. The room was blue, a framed Derek Jeter jersey hung above the headboard. Autographed baseballs were lined up in individual display cases on the dresser. Johnny hopped on his bed, and I sat next to him.

"Can we have a sleepover tonight, Mom?" he said.

After the tour, Johnny and I went back downstairs for dinner. My children, stepchildren, ex-husband and husband sat down to matzo ball soup in steamy porcelain bowls; matzo ball soup had always been a favorite of mine, the item I craved through each of my pregnancies. I had not had it in years. The smell of broth and parsley sifted through me, the lilies pushed their necks up out from the lips of the vase.

Johnny, the youngest at the table, started the Seder with the first of the four questions.

"Why is this night different from all other nights?"