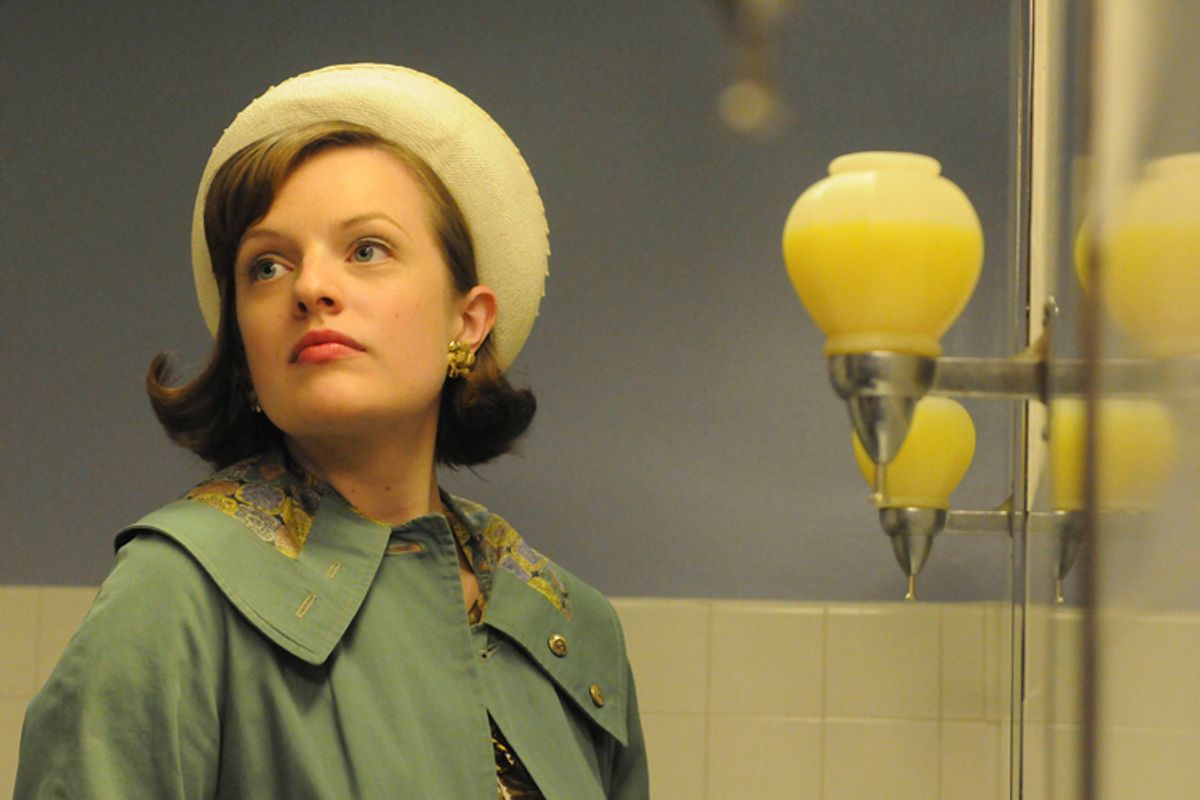 Here's a sad truth about TV: Despite the potential to evolve over the course of several seasons, most TV characters remain stagnant, doing little more than imitating themselves season after season. Likewise, most TV shows have one or two good seasons, and once the show's creator departs for a multimillion-dollar development deal elsewhere, the remaining writers try to replicate the show's best episodes over and over again.

In contrast, "Mad Men" takes thrilling advantage of the genre. Not only does each episode show some evolution or change in the atmosphere while still adhering tightly to a premise so that each line, each action, dovetails with the theme of the episode, but the characters and the relationships between characters evolve as each season progresses.

The joy of "The Suitcase" rests in watching Peggy and Don's relationship evolve unexpectedly over the course of a single night. Having collaborated in some odd, unspoken partnership over several years, these two find themselves in entirely new territory thanks to the simultaneous dissolution of each of their personal lives. However unnerving it is to watch Peggy avoid Mark or to see how Don delays getting bad news about Anna, their ability to encounter each other with increasing honesty as the night wears on brings immense satisfaction to an otherwise bleak picture. The nuanced yet utterly realistic progression of scenes between Don and Peggy not only places them on new, more promising ground, but it constitutes some of the most artful, smart dramatic writing to take place on the small screen.

Peggy begins the episode feeling good about her personal life: Mark has a romantic dinner planned at a fancy restaurant. Another secretary gives Peggy a congratulatory nod on her future married status, and Trudy Campbell tells her "26 is still young," with the infuriating condescension of a pregnant lady about to eat a rare steak and watch some blood sport with the boys. Trudy is a real daddy's girl -- a nice foreshadowing to Don and Peggy's subsequent, emotionally removed conversation about watching their fathers die in front of them.

As smug as Peggy is feeling as she applies her lipstick, when push comes to shove, her loyalty to Don and to her job trumps her loyalty to Mark. We still expect her to drop everything and come running when Mark reveals that he's gathered her whole family for their "romantic" dinner, but this news makes Peggy even less interested in showing up. "I don't know how many nice boys are linin' up for you!" Peggy's mom yells at her over the phone from the restaurant. "You should be grateful!"

"What's the point of doing anything nice for you?" Mark asks. But instead of endearing himself to her by bringing the family along, he's dead to her forever. Peggy even has the gall to express her repulsion at the idea that Mark would stay and eat dinner with her family when she's not there. Using his last shred of self-respect, Mark says goodbye to Peggy forever -- but notice that Peggy doesn't actually cry until Don yells at her.

With Don refusing to confront the loss of the one person who matters to him, Anna, and Peggy turning her back on her family and her boyfriend in one fell swoop, suddenly these two are forced to face the resentments that have been building up between them. Peggy brings up Glo-Coat, insisting that it was her idea, and Don explains the basics of capitalism to her. "It's your job! I give you money, you give me ideas!" he yells at her. "You never say thank you!" she yells back. "That's what the money is for!" he bellows, turning red in the face, and we flash back to Don, paying his whore for services rendered. "You should be thanking me every morning when you wake up, along with Jesus, for giving you another day!" Don adds. Even as he insists that at work, nothing is personal, he wants to take credit for creating her the way Roger wanted to take credit for creating Don.

"By the way, you're twenty something years old. It's time to get over birthdays!" Don snaps. Here, Don is schooling Peggy on what it means to live for work: you don't honor any passage -- death, birthdays. Nothing outside of the office has weight. This is the way that the true professional -- and the true avoidant drunk -- thinks.

After Peggy is done crying in the bathroom, Don plays her Roger's tape about the old days at Sterling Cooper. Peggy acts like it's too personal to joke about it, but Don says, "Come on, Ida was a hellcat? Cooper lost his balls? Roger's writing a book?!!" In other words, this is our family. Let's make fun of them together.

Later, at the diner, Peggy and Don compare alienated upbringings in the understated, concise dialogue of old friends. Then they go to a bar and Peggy says everyone thinks they slept together. Don calls her "cute as hell" but says he can't mix personal with professional. Peggy calls him on it, citing his many dalliances with secretaries, but Don makes another rule clear: if she's going to be his new work-family, or his equal, or his one true friend in the world (Which is it? All of the above?), she's going to have to check her moralizing at the door. Finally, after Ali knocks out Liston (as Roger alone bet would happen), Don says, "Let's go back, pack up, and go home."

Instead, of course, they stay at home (the office) and Peggy practically holds Don's forehead while he throws up. (Remember Blankenship's earlier words "While you were in the toilet…"?) Then Duck shows up to demonstrate the extreme ugliness that comes from confusing personal and professional life. Just as Mark mixes up romance with family to his doom, Duck mixes work and love ("I know it's not a diamond necklace, but I did spend some money on those cards!"), confesses that he sees Peggy as his only hope, then tries to take a dump on what he thinks is Don's chair. When Duck sees Don, of course, he assumes that Don and Peggy are sleeping together. Duck calls Peggy a whore, Don swings, and soon the two drunks are on the floor. Don, grimacing at what he sees of himself in this hideous mirror of Duck Phillips, calls "Uncle" and ends the fight.

"I don't know why I was with him, it was a confusing time," Peggy begins, once Duck is gone. "Stop, you don't have to explain. Can you get me a drink?" says Don. He's the opposite of a real family, or a real mother, or a real boyfriend, who might want to know the details of such a strange choice. Peggy looks relieved.

So everything is out in the open between them, the rules are established (no moralizing, no explaining, no thank yous) and both Peggy and Don look more comfortable than they have in a long time. Don puts his head in Peggy's lap, just as he once put it in Anna's lap, and he falls asleep. While he's sleeping he dreams that Anna comes to say goodbye, suitcase in hand, and when she sees him with Peggy, she smiles, as if Peggy is taking over her role. Later, when Don finds out that Anna is dead, he sees Peggy there and then cries. The scene is heart-wrenching yet believable: Don is a wreck, Peggy is awkward but kind, and mostly what we feel are the terrible regrets of an emotionally stunted man, even as he searches for another safe harbor.

Peggy wakes up later to find Don, looking clean and well-groomed. Completing their role reversal, Don asks her about his ad. This time it's Peggy's turn to be skeptical. "Why are you shitting on this?" Don asks, sounding like Peggy.

"It's good," Peggy says, sounding like Don. "It's very good." Don may be Peggy's boss, but somehow the two are equals. And in some ways, Don has become the weaker of the two, and Peggy is now Don's protector. Remember how she wielded the suitcase like a shield in her TV pitch? "No matter what comes at me, I know I'm protected!" Don looks like he wants to say that as he grabs Peggy's hand and gives her a meaningful look. He's found his new Anna. Instead of pretending that nothing passed between them -- the way he did with Allison, his secretary -- he acknowledges that everything is different now.

Is this the ultimate work relationship, a pact between a new mother and a needy son, a budding romance, or some strange hybrid of all of the above? As Peggy leaves, she asks, "Open or closed?"

The future for these two is wide open. Whatever happens, Don is feeling optimistic for the first time in months.

But can a healthy bond form between two people who turn their backs on their existing families, who can't tolerate the pressures and moral judgments of real life, who find solace in the strange form of unconditional acceptance they've cobbled together at the office? No matter how desperate we might be, as viewers, to see Don and Peggy tell each other the truth, to have a relationship of (almost) equals, to share details about themselves at last, becoming the new Anna has a somewhat dubious value to Peggy, considering that Don couldn't even bring himself to speak to Anna before she died. And what do we make of these allusions to Samson, the seemingly invincible warrior, brought down by Delilah's trickery? If their relationship is a mirage that lacks the intimacy and the stakes of a real-life bond, will Peggy be Don's eventual undoing?

Some hint of the future lies in Simon & Garfunkel's "Bleecker Street," which plays as the credits roll: "Smiling faces try to understand/ I saw a shadow touch a shadow's hand."