Remembering a "triumph" by the Great Communicator that never actually happened 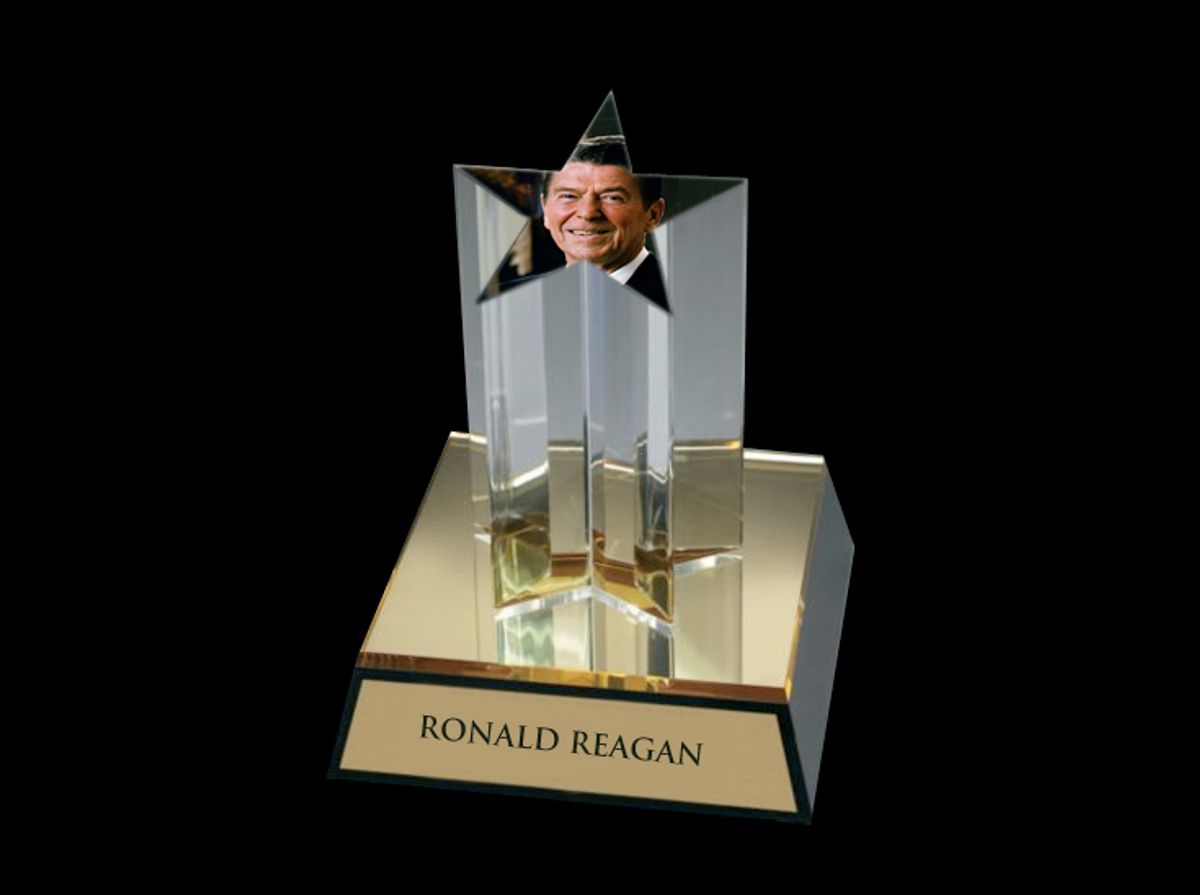 Ladies and gentlemen, meet Jim Kessler: the latest pundit to use hindsight to invent nonexistent differences between Ronald Reagan's political standing in 1982 and Barack Obama's today.

Kessler, who is identified as vice-president of Third Way, penned an Op-Ed in Sunday's Washington Post under the headline, "To keep the 2010 midterms from repeating 1994, Democrats can learn from Reagan." In Kessler's telling, Reagan faced similar political peril heading into his first midterm -- soaring unemployment and declining popularity -- but ended up scoring a "triumph" in the '82 midterms by rallying "Americans behind his optimism ('Don't let anyone tell you that America's best days are behind her') and faith in American exceptionalism ('the last, best hope of man on Earth')."

The "triumph" that Kessler describes involved a loss of 26 House seats for the GOP. Yes, 26 is probably fewer than Obama's Democrats will lose this year -- but the GOP only had 191 total seats heading into the '82 midterms, 64 fewer than Democrats have today. The GOP also lost seven governorships, giving Democrats control of a total of 34, and nearly a dozen state legislative chambers. And while it's true that they did break even in Senate races, maintaining their majority, this was not the momentous development Kessler describes. Instead, it was a tribute to the GOP's (now pretty much extinct) liberal wing: Without left-of-center Republicans like Lowell Weicker and John Chafee, thorns in Reagan's side both, hanging on in their liberal states, the Senate would have been lost for the GOP.

Just consider how Reagan's "triumph" was reported at the time by the newspaper that published Kessler's nonsense on Sunday. From "President's Hill coalition is threatened" by Lou Cannon and Walter Pincus on Nov. 3, 1982:

President Reagan's working coalition in Congress was thrown into jeopardy last night by a tidal wave of Democratic votes that carried incumbent Republican House members out of office and created a tense and uncertain mood at the White House.

Sen. Robert J. Dole (R-Kan.), the most outspoken member of the GOP leadership team in the Senate, said the administration was "taking a bath in the House" and that this meant that Reagan would "have trouble getting his program through." Later he withdrew the word "bath" and substituted "shower."

A jubilant Martin Franks, executive director of the Democratic congressional committee, said of the president: "He no longer has ideological control in any way, shape or form." House Speaker Thomas P. (Tip) O'Neill Jr. (D-Mass) called the congressional elections "a disastrous defeat" for Reagan.

At the White House, chief of staff James A. Baker III tried to put the best face on the outcome of an election that was clearly disappointing to Republicans. Baker said that the president was "upbeat" because of the Republican retention of the Senate. But only a few days ago White House spokesman Larry Speakes, after conferring with Baker, described the notion that the Democrats might take over the Senate as "the stuff of which pipe dreams and political columns are made."

Some other post-election Post headlines: "Democratic Tide Sweeps State Races; Party Will Dominate 34 Statehouses in '83"; "Alliance Born in Hard Times Makes a Vigorous Comeback" (about the return of the Democratic coalition); "Democrats Claim Rout of the Commandos of New Right Once and for All"; "Another Step Away From Reaganomics"; "Soviets Describe U.S. Returns as Blow to Reagan."

And so on. I've written before about the harsh political realities Reagan faced after his '82 triumph: an approval rating that declined even further, well below 40 percent; open exhortations from conservatives (many of whom accused him of betraying their cause) not to run for reelection in '84; open calls from some on the right for a primary challenge if Reagan refused to stand down (Jack Kemp, Jesse Helms and William Armstrong were all mentioned); and even primary flirtations from Bob Packwood, a leader of the GOP 's dying left wing. Polls consistently showed Reagan trailing the 1984 Democratic pack.

Kessler's revisionism is understandable in a way. We know how Reagan's story turned out, with a 49-state landslide in 1984. And we know the Reagan image that dominates today, of a beloved national leader and icon. So it's hard to imagine that he could ever have faced the kind of voter anger and pundit second-guessing that Obama now faces. But he did.

Kessler is hardly the first pundit to claim that Reagan possessed some kind of magical formula that allowed him to defy political gravity. The truth, though, is that Reagan's standing fell and rose with the economy, just as Obama's does today. Columns like Kessler's that argue that Obama would be in a better political place today if only he could mimic this Reagan trait or that, are simply false. For his contribution to the genre, though, I am happy to induct Kessler into the newly created Reagan Revisionism Hall of Fame. His plaque will appear between Richard Cohen's and Faoud Ajami's.