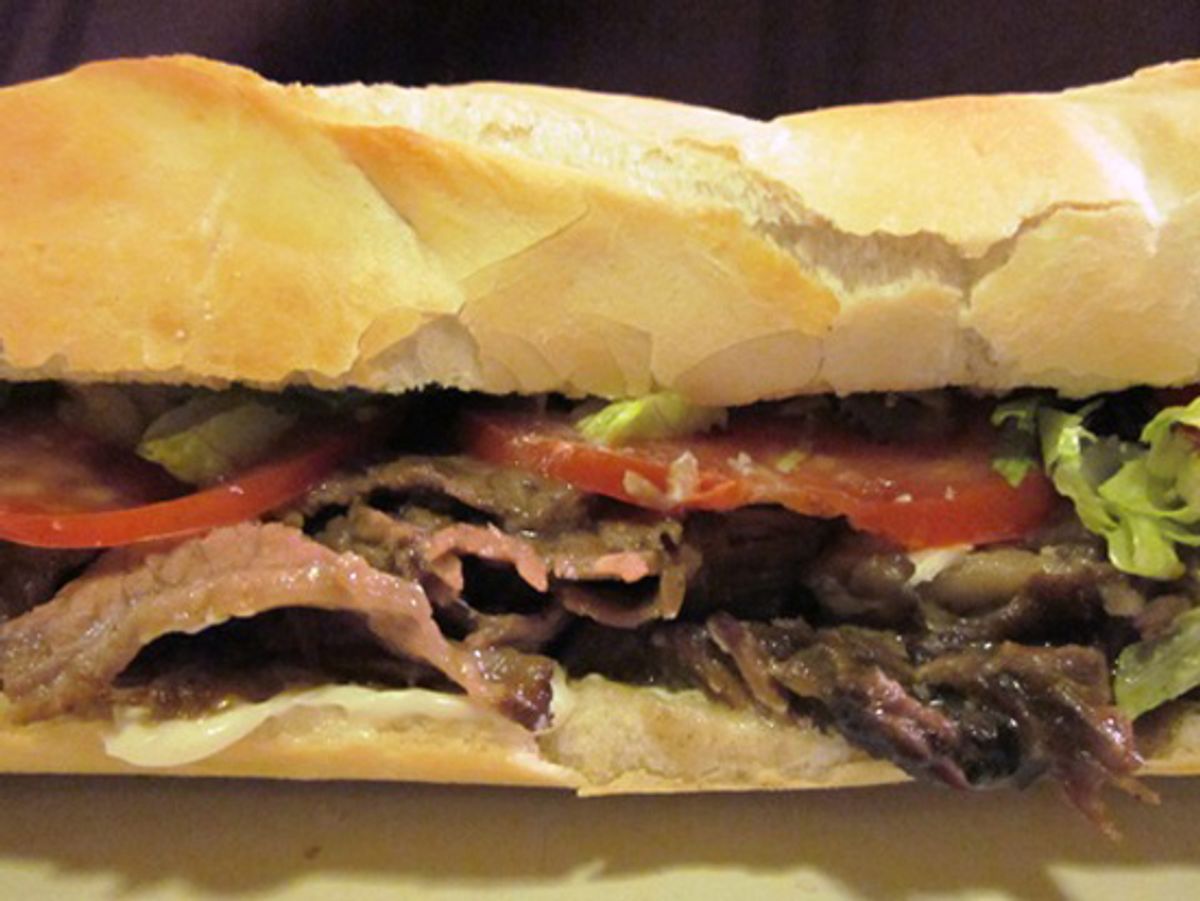 "(Labor Day) constitutes a yearly national tribute to the contributions workers have made to the strength, prosperity, and well-being of our country."

In the summer of 1929, as economic hard times loomed, New Orleans transit workers were deep into a strike they were doomed to lose. Violence and destruction were loosed on the city. Lives were lost and feelings ran deep.

Ordinary citizens supported the strike. No one crossed picket lines. Bakeries and sandwich shops along the streetcar route passed out sandwiches to the strikers.

Clovis and Bennie Martin ran a coffee stand and restaurant in the French Market. The two had worked on the streetcars and been members of Division 194 when they first came to the city a few years earlier. They wrote a letter to their former comrades that August, faithfully pledging their hearts and fortunes to the strikers. Clovis and Bennie promised to be "with you till h_ _ l freezes, and when it does, we will furnish blankets to keep you warm."

The Martins vowed to feed their brothers of the troubled 194th for free. Men, out of work and down on their luck, took them up on their offer. When one showed up at the back door of Martin's Coffee Stand and Restaurant, an oversize loaf sandwich was prepared and given to the "poor boy" who need it. No charge.

By October the streetcar strike ended. The union lost but the transit company did not emerge unscathed. Streetcars lost business and never regained their pre-strike popularity from a public with a long memory.

Folk history tells us this was the birth of New Orleans' archetypal sandwich, the po' boy. French bread sandwiches were around in New Orleans and elsewhere for a long time before this, but the iconic po' boy was conceived in the shadow of the Great Depression, from hunger and hard times. Po' boys are the food of the people, created from soul, solidarity and the hunger for a better life.

Even after the strike and on into the long days of destitution that followed it, the po' boy was a cheap way to stay fed. Nobody's seen po' boys for a nickel or a dime in a long time, but to this day, it is a mainstay in the typical New Orleanian's diet. To this day, they are generously filled with flavorful ingredients and relatively inexpensive. They will always be the People's Food.

Early during the summer of 2006 I went down to Pass Christian, Miss., to work in God's Katrina Kitchen. I hadn't heard about it until one of my firefighter friends passed along a request from a boy who was taking donations to pay for his trip. I knew right away I had to go. I didn't belong to a church or civic group so I did it the hard way. I went alone.

I called and talked to the chef, told him my food credentials and got a quick OK. He was going to take a week's break while a team of ladies from Pennsylvania and I volunteered to pick up the slack. He left right after supper on the night I arrived a week later. No instructions, just gone.

The Pennsylvania ladies and I conferred. I promised to be at the kitchen every day by 4:45 a.m. to start on breakfast. I'd then move on to bag lunches for the locals and for the volunteers there to help clean up and rebuild. After lunch I'd pitch in with the ladies for dinner. First morning I got one helper from the Pennsylvania group, a raft of eighth graders from Ohio and James, who came down from Jackson and knew the ropes. Thank God for James. Thank God for all of them. We became a team.

I loved my gorgeous eighth graders. They followed directions beautifully, thoroughly. Cracking 30 dozen eggs at 5 in the morning is no joke, but they did it. They were conscientious about cross-contamination and diligent about wearing their gloves. They kept the Clorox wipe-down schedule. They got food wrapped and into the coolers quickly. They were cleaning demons. I've worked with longtime professionals who did not have half their dedication and willingness to do whatever needed doing. These were not children playing at helping out. They were mature, cheerful and intelligent people I could rely on to get the work done.

After my wonder team and I cooked and served 500 or 600 breakfasts each day, I'd set up the assembly line for bag lunches -- a sandwich of whatever meat and cheese we had, a bag of chips, a snack, a drink, a napkin. We made about 400 lunches a day and they had to be done before the crews left for their assigned work, which meant breakfast was still being served while we hurried to get food into bags.

We knew the sandwiches we made fed Katrina survivors and volunteers with more than ham and cheese on loaf bread. They weren't po' boys, but they were something to keep people going, body and soul. Love and compassion flowed from our hearts through our hands to them. We all felt it. Someone who lost more than I can bear to think about was able to keep their chin up for another day because a 12-year-old wrapped a PBJ. Someone worked harder to make a house a bit more snug, a little more welcoming because a lady from Pennsylvania added pickles to the tuna salad.

My crew and I gave our best for those sifting through the wreckage of their lives. We put ourselves out for the men and women, boys and girls, swinging hammers or hauling rubble. We gave to the givers. And we gave to the needy and the fearful and the broken.

I like to think Clovis and Bennie's hearts warmed when they saw a hungry striker on the back step. I like to think those poor boys got a good helping of respect and support along with their sandwiches. I know of a lot of eighth graders and a lady from Pennsylvania who understand exactly what that means.

God's Katrina Kitchen was just ordinary people, quietly laboring on behalf of those whose lives were ruined by the storm. Workers made contributions to "the strength, prosperity, and well-being of our country," just like the Department of Labor statement at the beginning of this article. Just the way we're supposed to.

Laissez Les Bons Temps Rouler. The po' boy may have had tough beginnings, but making one sandwich or a dozen for people you love is happy work. Gather your friends and family, put on a little mood music and pour the beer or wine. You might want to kick off your shoes, cut up a little, laugh a lot. It's time to let the good times roll, baby.

The bread: The staff of life

The business of po' boys always starts with the bread. Back in the day, John Gendusa, the Sicilian baker who supplied the Martin brothers' bread, remembered Italian loaves made long and even, without the pointed ends and plump middle of typical French bread. His loaf was almost a full yard long and let the Martins produce consistently sized sandwiches for their patrons and out-of-work brethren.

Folks claim something in the air makes New Orleans bread unique. Could be. It's bread like no other. I'd describe it as a cloud with the perfect crust. If you can't get it, use your favorite French or Italian loaf. It's not the real deal, but short of New Orleans, nothing is. Rumor has it that Asian bakeries make a product remarkably similar to the traditional loaf. Maybe they do. Try it if you're fortunate enough to have access.

The roast beef: Tender enough to cut with a glance

Roast beef for po' boys is cooked and cooked and cooked. I've seen different approaches, but I start with my grandma's way to cook roast beef, plus a few touches I've added over the years. It's interesting that the cooking method, baking dry meat with its gravy, is similar to making carnitas or pulled pork. Good ideas show up everywhere.

Dressed sandwiches in New Orleans are served with mayonnaise, lettuce and tomatoes. Pickles or onions are added on request. Ask for mustard and you quickly label yourself as "not from dis naybahood, are you, dawlin'?"

Construction: All together now

Split the loaf most of the way through, leaving a "hinge" to hold it together. Heat your bread according to package directions. Remove from oven.

Cool the loaf just long enough to handle and spread mayonnaise on top and bottom of the bread.

Pile meat and debris onto the lower half. Ladle on as much gravy as you like and top with shredded lettuce and tomato slices.

Here you have it, a roast beef po' boy, "dressed and sloppy." It's fed hungry people for a long time and that's a worthy tradition to follow.