In her latest stunt, the pop star appears in a bikini made of meat. Why does it just make us feel tired? 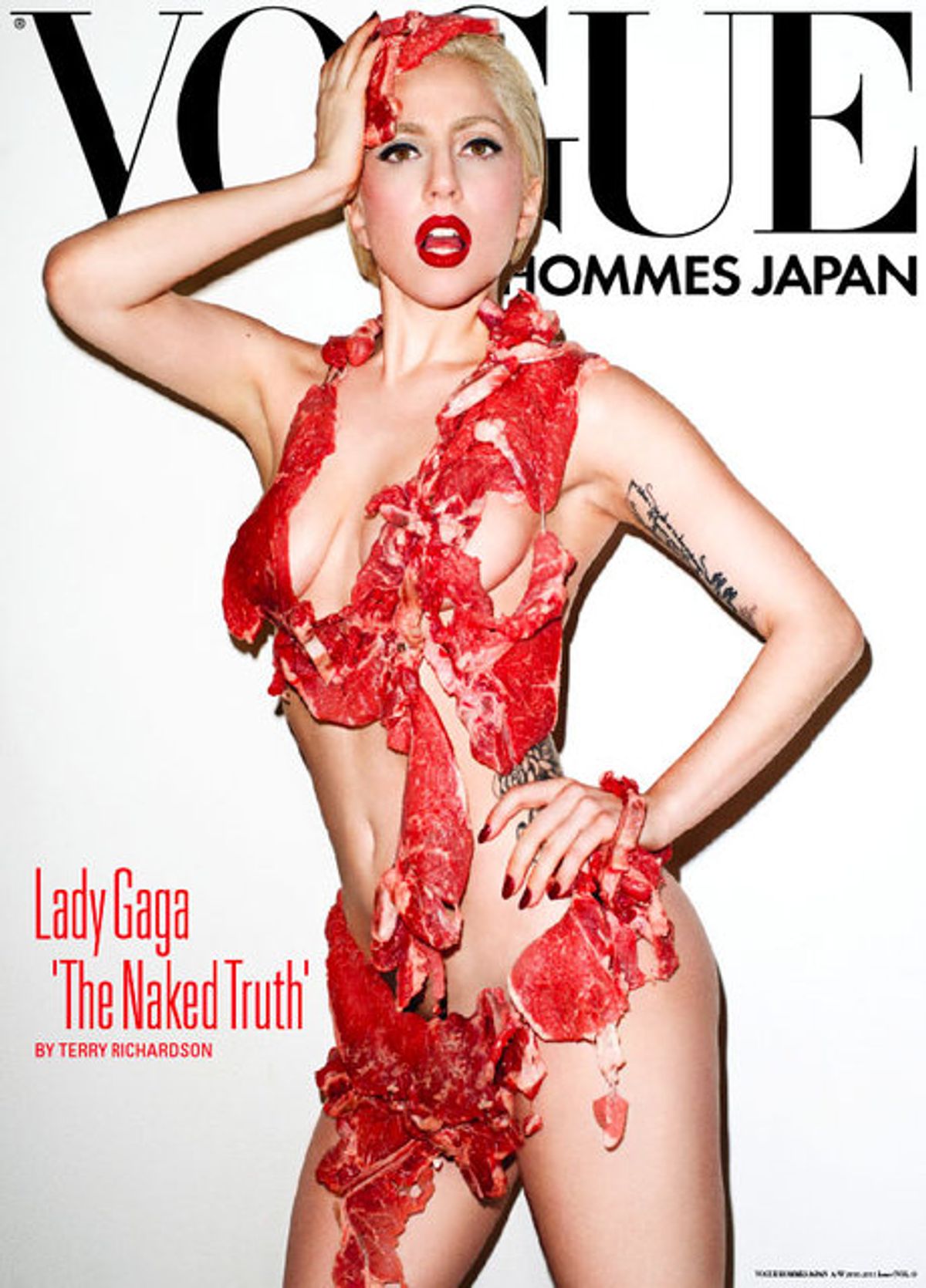 We applauded when she took a stand for gay rights. We giggled at the speculation that she's really a dude. We swooned when a middle school kid made us appreciate anew the gorgeousness of "Paparazzi." She's kookily original, touchingly devoted to her fans, and one accomplished musician. So we hope you don't take this the wrong way, but Lady Gaga, could you just go away now?

It was the meat bikini that finally did it. Sure, in the two years since her first album, "The Fame," catapulted her to instant icon status, she's consistently reset the bar for what constitutes provocateurship. The gun bra? The bubbles? The pelt of Kermits?  The Katy Perry-incensing video for  "Alejandro"? The near constant rolling around in fake blood? So when she showed up this week on the cover of the new Japanese Vogue Hommes, bedecked in an ensemble that looks like it came off the rack of the back room at Peter Luger it was just Gaga being Gaga and it was, in fact, tiresome.

Her loyal fans – and they are multitude – still manage to delight in her every glittery, viscera-dappled incarnation. They're like your parents' friends who can cheerfully upload eighty new pictures a day into their "Baby Zeke, September" Facebook albums. And her detractors – including now, predictably, the perpetually cranky folks at PETA -- likewise just won't stop being offended by her. But mere days before she's slated to give what will no doubt be the most amazing, crazy, wild, shocking MTV VMA performance ever, it's the rest of us who find ourselves rapidly growing weary.

Instinctively theatrical as only an artsy fartsy New York chick can be, Gaga doesn't just play the part, she lives it. She would have us believe that even when she's not performing at Madison Square Garden, she's strutting around in a mirror ball costume anyway. (It must be murder to sleep in that getup – and I wouldn't want to sit next to her in coach class.)  Pop stars, like superhero-obsessed preschoolers and flamboyant maiden aunts, live by a different set of rules than the rest of us. If they feel like wearing a cape to Costco and reciting a poem about Martians at the dinner table, we generally shrug and indulge them, because they're harmless and often highly entertaining. Yet somewhere around the fourteenth verse of a manic, sugar-high induced version of "Heart and Soul," it's time for the bland, normal faction of the family to plead for mercy, and admit that while we love what you've done with that plate of California rolls, it does not constitute acceptable outerwear, dear.

The danger for Gaga now is that in her tireless zeal for outlandishness, she's created a larger-than-life character, a self-defined Fame Monster. And the thing about monsters is that eventually, after they've trounced around downtown a while, they tumble hard when the villagers get sick of their antics. It's a fine line between being the next David Bowie and being the next Spice Girl. Madonna – of whom I've never been a fan -- has spent a career pushing the envelope, but to her credit, she's always found new envelopes to push. The Material Girl begat the "Erotica" sex object begat Evita Peron begat the heroine of "Glee." Gaga, in contrast, seems only interested in variations of the glam queen in pointy shoulder pads. It's a lot of lace and lobster shoes, but it's beginning to look the same.

The overexposure isn't all her fault, of course. She's a fascinating, original, gifted artist. And for a drama-seeking mainstream media, well, there aren't too many other people showing up for baseball games in bras and no pants. She's interesting. She's also exhausting. Where does one go after one has been in Vogue in a beef bikini -- and managed to bore us with it? Is she going to swaddle herself in Gulf oil? Make out with the pope? We're all going to need Ritalin prescriptions just to keep up with her.

When she takes to the stage for the VMAs this weekend, Gaga will likely sparkle and bleed and be surrounded by all kinds of machinery and prancing satyrs. It will be splashy and expensive and everyone will be talking about it the next day. But wouldn't it be wild, unexpected, and bold if Lady Gaga decided to send a promising 24-year-old with an amazing career ahead of her in her stead, if she introduced the world, for one night, to a new character named Stephani Germanotta? She could sit down at the piano and plunk out a little tune. She could, for the first time in a long time, surprise us. And we'd have somebody to fall in love with all over again.