The man who has proposed on-board pay toilets for Ryanair has a new idea: Get rid of the copilot 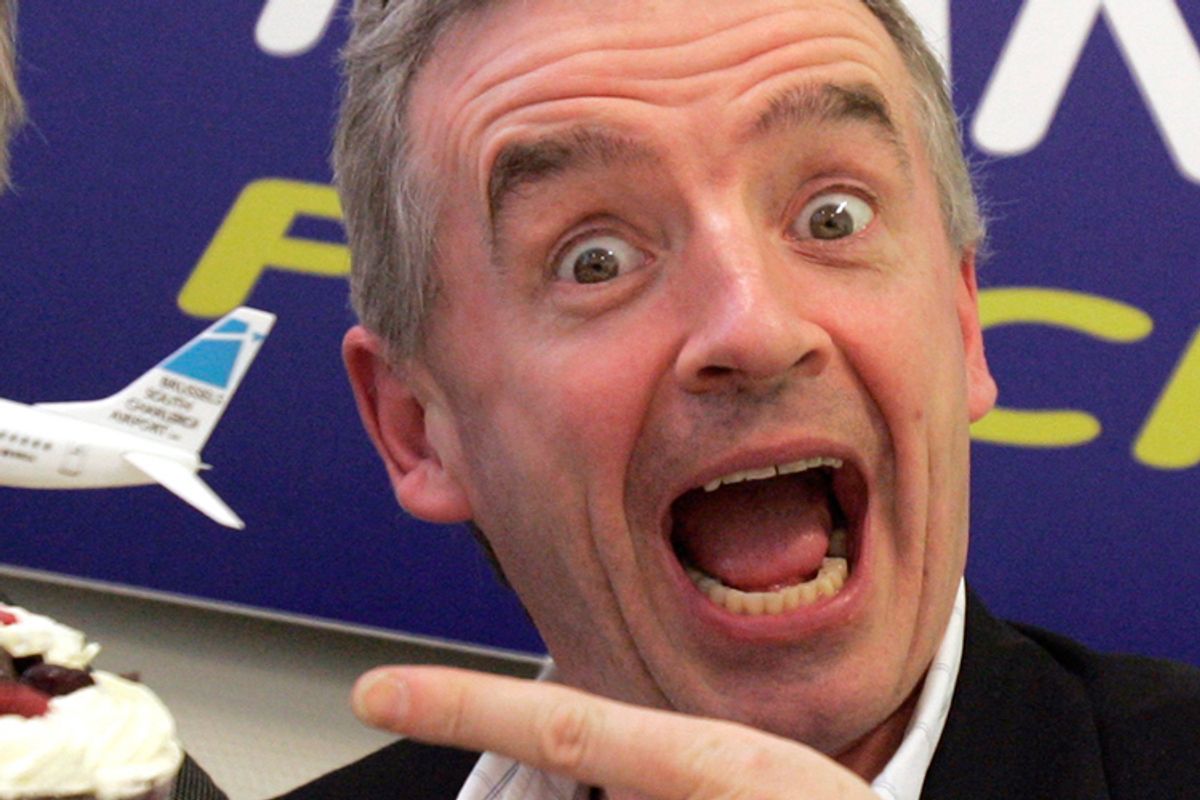 When Michael O'Leary talks, people listen. O'Leary, if you're unfamiliar, is the head honcho of Ryanair, Europe's wildly successful, low-cost version of Southwest. People listen because what he's got to say is liable to be some eyebrow-raising combo of controversial, insulting and nonsensical. It can be difficult to determine when he's being serious, which is likely part of his shtick, but he's nothing if not provocative.

O'Leary is a sort of anti-Richard Branson. Where Sir Richard uses his flamboyance to elevate and even re-romanticize the idea of flying, O'Leary strives to grind away every last vestige of its dignity. His gimmicky proposals have included on-board pay toilets and stand-up cabins. He strives to make Ryanair so low cost as to do away with airfares entirely, he has said, relying only on ancillary revenue from things like luggage fees and, well, pay toilets.

The ability to charge 15 euros -- or no euros -- for a flight to Mallorca requires that expenses be held as low as possible. To this end, O'Leary views his employees as being about as important and expendable as a paper boarding pass. Indeed, O'Leary's latest publicity stunt is a call to remove first officers (copilots) from the cockpits of Ryanair's fleet of Boeing 737s. One pilot, rather than the required two, he says, is enough to get the job done safely, particularly on shorter flights.

"Really, you only need one pilot," O'Leary boasts during a recent interview in Bloomberg Businessweek magazine. "Let's take out the second pilot. Let the bloody computer fly it."

The bloody computer. There are so many things wrong with this that I hardly know where to begin.

Regardless of whether or not his harebrained idea will ever fly (it won't), O'Leary is nevertheless perpetuating the irritating myth that jetliners are so automated that they essentially "fly themselves," with the crew on hand mainly as a backup. This ridiculous notion, forever repeated by the press, is something I've addressed many times in this column. It never goes away, and now O'Leary has given it yet another media run and another phony glimmer of plausibility.

I'll spare you another agonized dissertation, but here's a brief review:

The realities of cockpit automation are widely misunderstood and consistently exaggerated. This is in part thanks to the aerospace academics and researchers the media tends to call on. While their work might be useful and important, they often have limited knowledge of the operational aspects of commercial flying. Blame also falls on those airline pilots who, in their attempts to sound self-effacing or when trying to offer easy-to-understand explanations, come out with hokey summations like, "Aw, dang, this plane practically flies itself." They undermine their profession and give people the completely wrong idea.

Airplanes do not take off by themselves; they do not land by themselves; they do not fly by themselves. Yes, there is such a thing as an automatic landing -- an "autoland" in pilot parlance -- whereby the plane performs a hands-off touchdown. This capability is there if you need it, for those extreme low-visibility approaches, but in practice it is very rare, comprising well under 1 percent of all landings. Rare because an automatic landing is, in most aspects, more complicated and work-intensive than a manual one.

Meanwhile, the workload in even the most "automatic" cockpit can be surprisingly high. I fly mainly longer-haul international routes, and we carry along an auxiliary first officer. You'd be amazed how often all three of us are busy. As a rule, though, the busiest cockpits tend to be those on short flights. Ironically these are the very flights on which O'Leary seems to think pilots are most expendable. He's really showing his ignorance here -- if, in fact, he means what he's saying.

I'm trying to picture some poor lone pilot in a Ryanair 737 shooting an ILS approach to minimums, with a go-around and diversion to an alternate airport, having to deal with the weather, air traffic control and company communications, fuel planning, reprogramming the flight management system and setting up the next approach, and so on. Not to mention flying the damn plane. Sure, there's an autopilot, and it requires a steady stream of inputs in order to manage speed, altitude and course.

That's more or less routine. Now imagine something goes wrong. That's not a problem, though, in Michael O'Leary's view. And I quote:

"If the pilot has an emergency, he rings the bell, he calls her in."

By "her" he means a flight attendant. One extra employee on every Ryanair flight, you see, would be trained to land a plane.

I am not making this up.

To land a plane. As if "landing" is some insignificant, easily compartmentalized aspect of flying to be mastered over the course of a few hours of instruction. And with that I am forced to close my eyes, breathe easy and picture a "happy place" -- a place free of such abject idiocy and the ill-informed people who might actually pay attention to it.

I also picture a hapless flight attendant pressed into sudden duty, attempting to negotiate an instrument approach in a 737. Heck, for the touchdown, let's throw in a 20-knot crosswind just to make it interesting. This is so beyond the realm of possibility that it pains me even to address it, and I shudder to think that thousands, maybe even millions of people have read O'Leary's comments and granted them a shred of credibility.

Michael O'Leary has at last succeeded in presenting us with the most preposterous thing ever uttered by the head of an airline. Of course, no sane government body or aviation authority would consider his scheme for half a second, and I'd like to think that not even O'Leary could be brazen enough, or stupid enough, to take it seriously. But you never know. Certainly he sounds like he means it. Another provocative firecracker designed to cause a commotion and keep his company's name in the news? A cheap way of insulting his workers and reminding them who the boss is? Was he talking tongue-in-cheek?

Perhaps, though it'd be best if he simply kept his mouth shut.