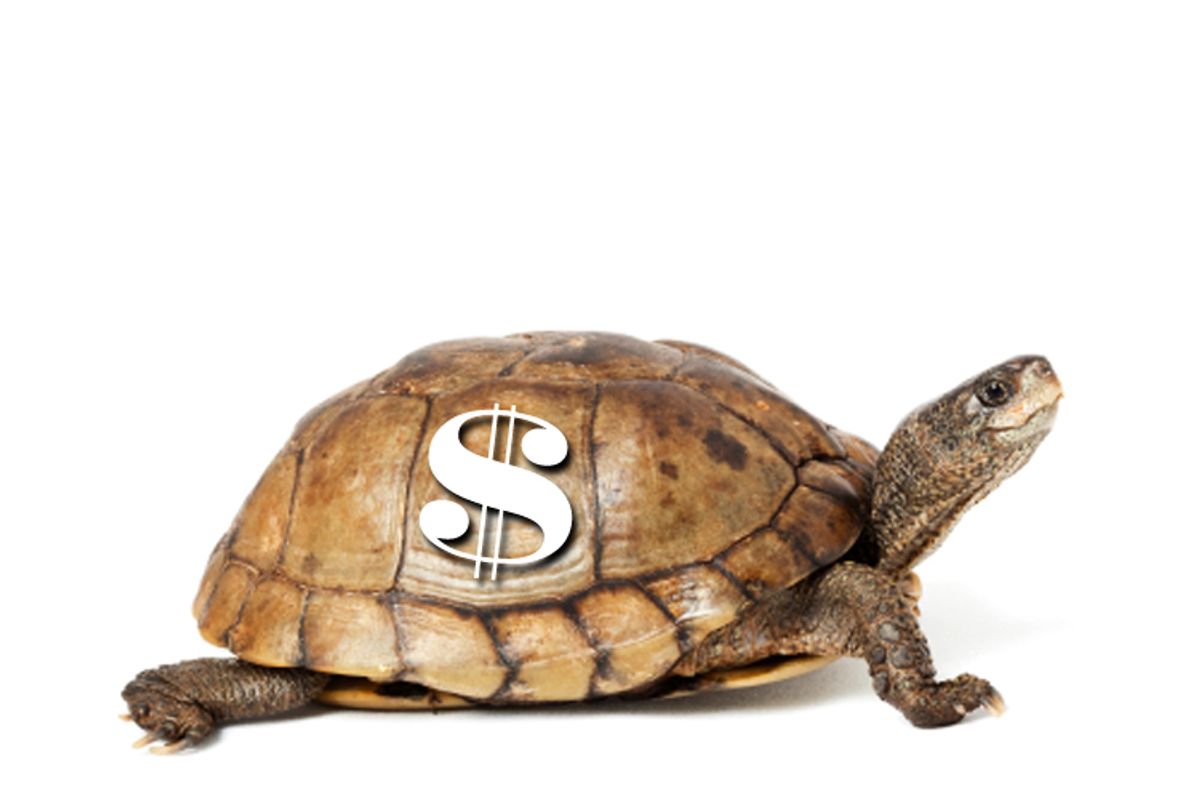 Word from the twelve Federal Reserve Banks, summarized in the Fed's so-called "Beige Book," shows the economy slowing in July and August.

But the Fed is quick to point out the economy overall is still growing -- even though it’s growing more slowly than in the spring.

Can we have a moment of realism here, please?

In 2008 and 2009 the economy fell into the deepest hole it’s been in since the Great Depression. Since then we’ve been struggling to get out. We’re failing big time.

After a typical recession, growth surges until the economy reemerges from whatever hole it fell into and returns to its normal growth path. Usually that surge isn’t difficult to accomplish once the upswing begins because all the assets the economy needs to get back to its old path are readily available -- lots of people who have been laid off or have come into the job market and been unable to find work, unused office and retail space, factories and equipment that had been idled. After the economy returns to normal and almost all these people and physical assets are back to work, growth slows to its normal pace.

But this time it’s not happening that way. More than two and a half years after the Great Recession began, many months after we hit bottom and when in a normal "recovery" we’d expect growth to surge, the opposite is happening. Growth is slowing.

We may or may not fall into another hole, but a so-called "double dip" isn’t really the worry. The worry is we’re not getting out of the giant hole we fell into. Growth is slowing when it should be surging. Think of a tortoise trying to get out of a deep ravine, who’s just begun to scale the wall when he gets tired and goes to sleep.

As I keep saying, this isn’t your ordinary business cycle. But we’re debating fiscal policy as if it were.

Democrats and Republicans are battling over whether the Bush tax cuts should be extended to the richest 2.7 percent of Americans next year. They shouldn’t be, of course. The rich don’t spend nearly as much of their incomes as everyone else, and the $36 billion windfall they’d otherwise get could be better spent saving the jobs of teachers, fire fighters, and police officers who do spend almost all their incomes.

Yet even if Democrats win this one, the tortoise might wake up and move several inches up the wall before falling asleep again. Even if Congress were to go further and enact Obama’s $50 billion infrastructure bank -- another proposal in the right direction — the tortoise might move another few inches.

The underlying problem is structural, not cyclical. There will be no return to normal because normal got us into the hole in the first place. And the normal kind of prescriptions can’t possibly get us out. Until the economy is restructured so more Americans share in its gains, the economy won’t make many gains. We’ll be forever trying to scale a wall that can’t be, because the vast majority of Americans lack the purchasing power to move upward.

If you’ll permit me a commercial, I explain all this in detail -- as well as what must be done -- in "Aftershock: The Next Economy and America’s Future," which will be out in two weeks from Knopf.