Apple as a news censor: No way to run an app store 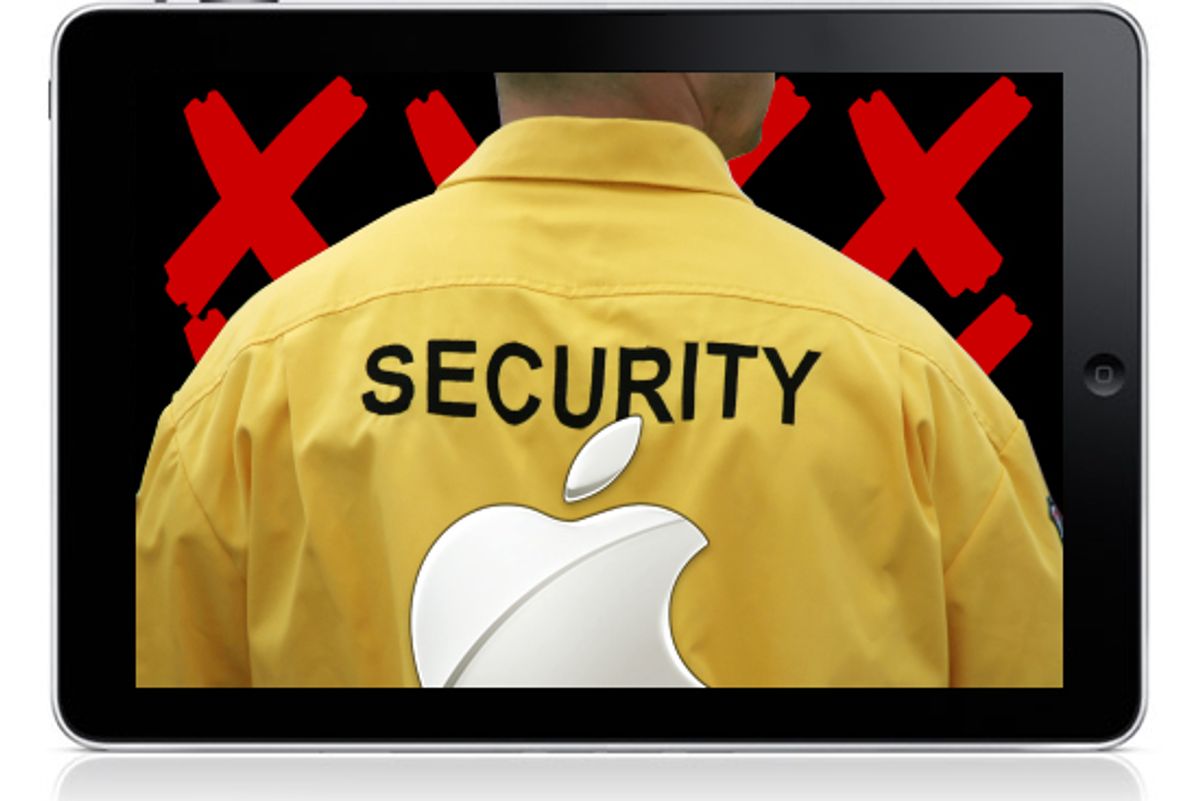 For all of you out there in media-land who still think that the iPad represents salvation for old business models and who welcome the App Store as a new platform for distributing content, I recommend a reading of Apple's new App Store Review Guidelines as helpfully summarized by Daring Fireball's John Gruber. (It seems you have to be a registered Apple developer before you can actually read the guidelines in full, but they're available at Gizmodo.)

Discussion of these guidelines in the tech press initially framed the move as a "relaxation" of Apple's policies, because the company will now allow developers to use third-party frameworks and toolkits. But view the guidelines from the perspective of content publishing and "relaxation" is not the word that will spring to mind.

This item stands out:

We will reject Apps for any content or behavior that we believe is over the line. What line, you ask? Well, as a Supreme Court Justice once said, "I'll know it when I see it." And we think that you will also know it when you cross it.

(Gruber speculates that the my-way-or-the-highway tone of this and other passages suggests direct authorship by Steve Jobs here, and that sounds plausible, but who knows?)

Now, the App Store guidelines are designed by software developers for other software developers. The thinking is, this is our device, we want to protect our users, this ain't no free-for-all, we're going to police the hell out of this environment. And Apple plainly has a right to do that. It's not the only approach to structuring a software ecosystem, but it's certainly a defensible one.

Trouble is, the App Store is also being framed as the New Newsstand. The idea of Apple as the keeper of such a newsstand never sat right with me: I just don't like the idea of my information diet being regulated by any company, let alone a company as tightly wound as Apple. Now Apple has made my unease explicit. In these high-handed words, the company is saying: We will ban whoever we want. And we won't tell you what the exact standards are. You can guess; then we'll decide.

The immediate retort here from Apple supporters -- hey, I'm one, I love my Mac and my i-devices! -- will be that I'm misunderstanding the purpose of the rules, they're meant to bar wayward code, not wayward ideas.

But how, exactly, can anyone draw a line between code and ideas today? Who says where a software tool ends and a piece of "content" begins? We're supposed to "know" this line "when we see it," but I don't see it at all.

Here are some quotes from the guidelines that Engadget highlighted:

"We have lots of serious developers who don't want their quality Apps to be surrounded by amateur hour."

"If your app is rejected, we have a Review Board that you can appeal to. If you run to the press and trash us, it never helps."

"This is a living document, and new apps presenting new questions may result in new rules at any time. Perhaps your app will trigger this."

"If it sounds like we're control freaks, well, maybe it's because we're so committed to our users and making sure they have a quality experience with our products."

Now read these questions from the perspective of a writer or journalist or publisher, not a software developer, and tell me they don't give you the willies.

It's always seemed to me that Apple seriously underestimates how impossible it will be to sit as censor and nanny over a thriving content marketplace, if that is what the App Store is going to become. Look at the trouble it had with political cartoonist Mark Fiore: He had to win a Pulitzer before Apple would let him use its platform to practice his art, which happened to involve poking fun at public figures, something the App Store didn't like. Such controversies will only multiply if the App Store becomes more popular as a content mart.

Now Apple is saying, explicitly, that it intends to draw lines, and those lines won't be drawn beforehand -- but hey, don't worry, because we'll just know it when we cross them!

Apple loves to maintain tight control of things. That's been a hugely successful approach for its hardware business. It's even a defensible position applied to software. But it's a lousy model for a newsstand.