No, healthcare reform is not like the Kansas-Nebraska Act

The most absurd explanation yet for Barack Obama's unremarkable poll numbers 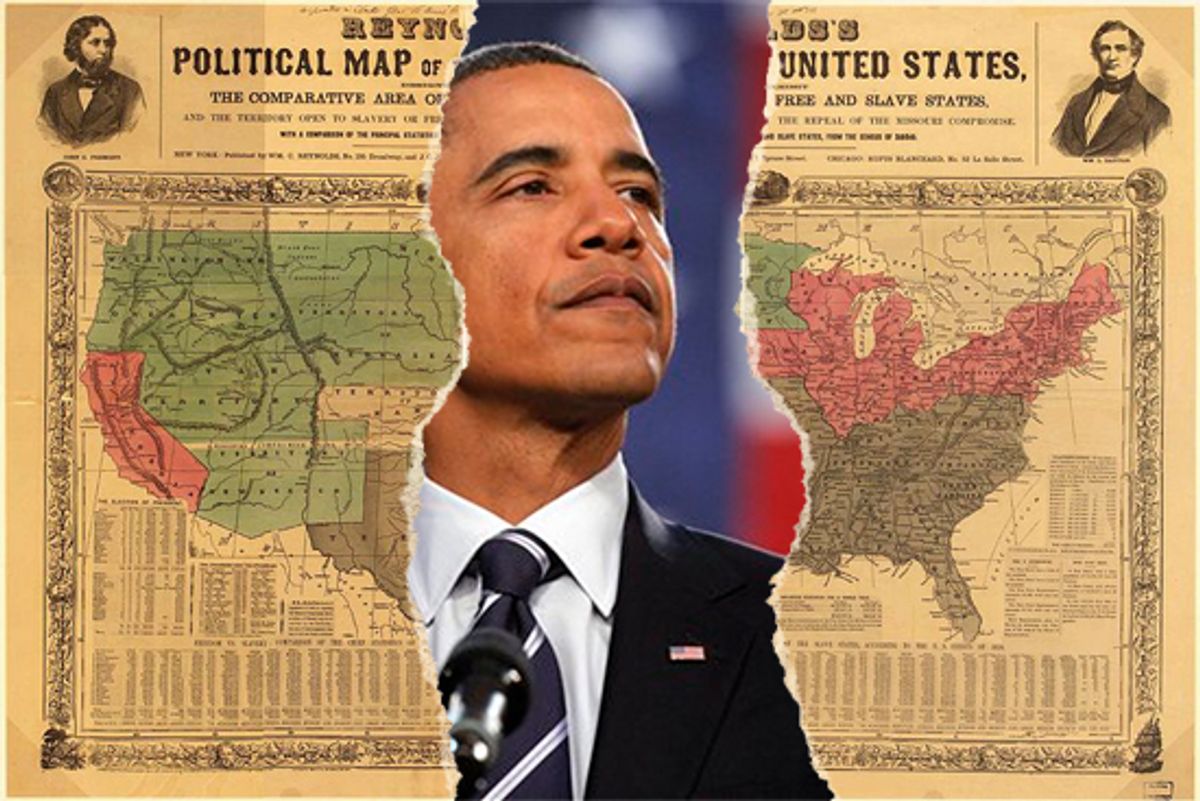 Usually, I don't pay much attention to the musings of Michael Barone, who used to be an unusually astute political analyst but who now mainly churns out predictable right-wing punditry, but this is just too much.

In his newest column, he addresses Barack Obama's weak poll numbers and his party's bleak November prospects. His argument -- that this represents a broad popular revolt against progressivism -- is hardly new. Just about every voice on the right has been making it for the past year, even though, as I've written countless times, it's wishful thinking: Obama's poll numbers certainly aren't good, but they're also exactly where they should be, given the unemployment and economic growth rates.

Still, Barone manages to distinguish his piece with some absurd hyperbole:

I think what we're seeing is a rejection of the Obama Democrats' big-government policies. The president and his party thought that in times of economic distress most voters would be supportive of or at least amenable to a vast expansion of the size and scope of government.

They jammed the Senate version of their health care bill through the House in March, in the face of the clear opposition signaled by the voters of Massachusetts as well as every public opinion poll. I can't think of a more unpopular major measure passed by Congress since the Kansas-Nebraska Act of 1854.

This is just silly. The Kansas-Nebraska Act accelerated the fracturing of the union over slavery and was one of the key developments in the lead-up to the Civil War. The healthcare reform plan signed by Obama….wasn't particularly popular. But it wasn't -- and isn't -- particularly unpopular, either.

Remember, right before the final bill cleared both houses of Congress, Gallup found that public opinion was split: 45 percent of voters said it should pass, 48 percent said it shouldn't. And that basic divide still exists. About as many Americans say they approve of the new law as those who say they don't. Moreover, polls still show that, given a choice between the two parties, voters continue to trust Democrats more on healthcare (granted, by a statistically insignificant margin). Would this really be the result if Obama and his party had just enacted a law that's as unpopular as something that helped cause the Civil War?

Barone's column is a classic example of wishful analysis. He and his allies on the right don't like Obama and don’t like the philosophy he represents (or that they think he represents) -- and they want to believe that their fellow citizens are with them all the way. So they're taking a completely explainable, unremarkable phenomenon -- Obama's lousy poll numbers and his party's poor November outlook -- and imputing non-existent ideological significance to it.

Maybe the better way to come at this is this: What should the approval rating be for a second-year president who entered office as the economy was imploding and on whose watch joblessness has climbed to near 10 percent? And what should the prospects be for that president's party -- a party that enjoys sizable Senate and House majorities that were built on unlikely victories in swing states and swing districts in the wave elections of 2006 and 2008 -- in the forthcoming midterm elections?

I'd say the president's approval rating should be in the low to mid-40s and that his party should be in store for a painful correction in the midterms. Certainly, this is what recent history suggests. At this same point in Ronald Reagan's presidency -- September of his second year -- unemployment was at 9.8 percent while Reagan's approval sat at 41 percent. Today, Obama's approval rating stands at 43 percent in the most recent Gallup poll, with unemployment at 9.6 percent.

Barone's theory of a mass revolt over healthcare and broader ideological concerns might be worth considering if Obama's poll numbers weren't so unremarkable.