Some fear a backlash against Christians in predominantly Muslim countries 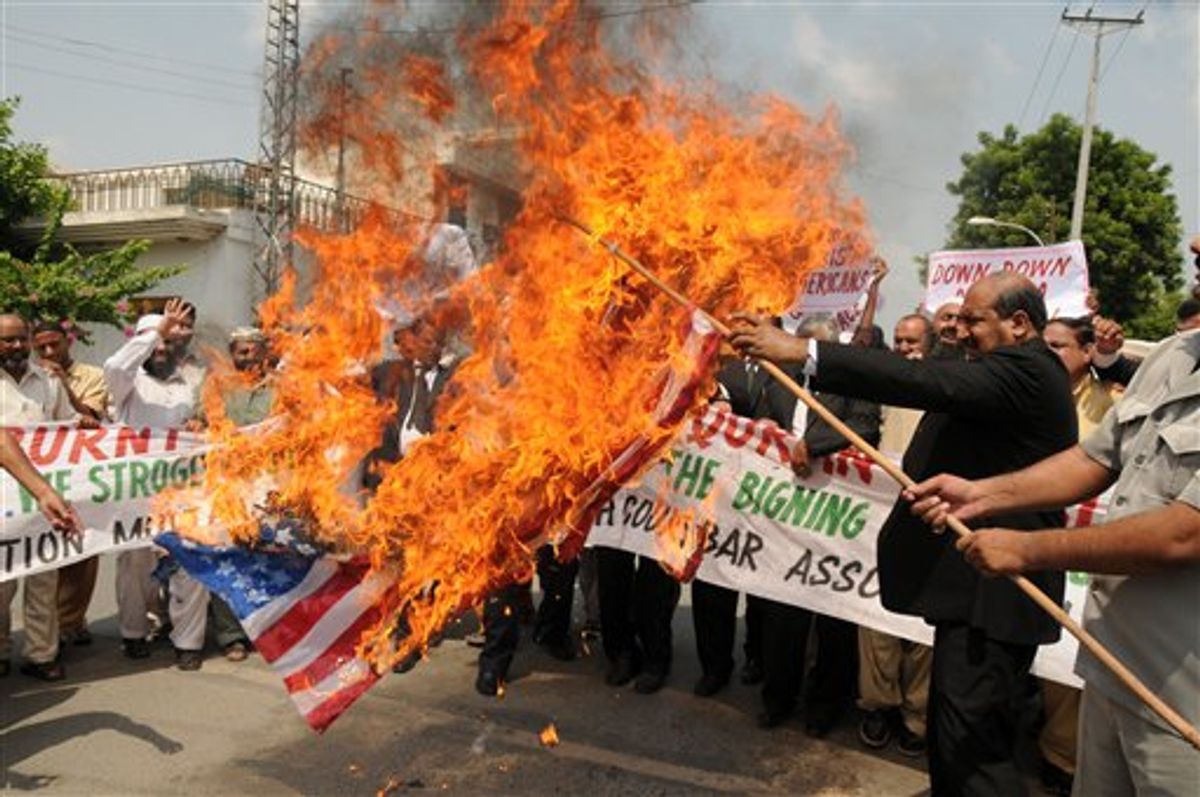 Pakistani lawyers burn a U.S. flag while rallying in reaction to a small American church's plan to burn copies of the Quran in Multan, Pakistan on Thursday, Sept. 9, 2010. (AP Photo/Khalid Tanveer) (AP)
--

An Afghan cleric threatened Thursday that U.S. troops in the country's north would face large protests if a small American church burns copies of the Muslim holy book as planned on the anniversary of the Sept. 11 terror attacks.

Religious and political leaders across the Muslim world, as well as several U.S. officials, have called on the church to call off the plan, warning it would lead to violence against Americans. The Rev. Terry Jones, of the Dove Outreach Center in Gainesville, Florida, has vowed to go ahead with the bonfire on Saturday, even though he has been denied the required permit.

Abdul Hadi Rostaqi, a member of the cleric council in Afghanistan's largely peaceful Balkh province, said Thursday that, if the burning goes ahead, "a big protest will be held" in the provincial capital Mazar-i-Sharif next Monday. NATO-led troops stationed in the city -- one of the country's main centers of the Islamic teaching -- would be the primary target.

Meanwhile, about 200 people marched and burned a U.S. flag in the central Pakistani city of Multan.

"If Quran is burned it would be beginning of destruction of America," read one English-language banner held up by the protesters, who chanted "Down with America!"

Iran's Foreign Minister Manouchehr Mottaki also warned of repercussions, saying the burning would "face reactions by the world's Muslims as well as followers of other religions," according to the official IRNA news agency.

A senior Lebanese imam, Sayyed Ali Fadlallah, told followers Thursday: "We are witnessing hateful calls to burn the holy Quran on the anniversary of Sept. 11, which requires of us as a nation to close ranks among various sects and directions and to be in one row to confront all those who are plotting against Islam and the nation in present and in the future."

Fadlallah is the son of the late Grand Ayatollah Mohammed Hussein Fadlallah, who was revered by Shiites around the world.

Secretary of State Hillary Rodham Clinton has denounced the planned burning and Gen. David Petraeus, the top U.S. and NATO commander in Afghanistan, has said it could lead to attacks on international troops.

There are also fears of a backlash against Christians in predominantly Muslim countries. Canon Andrew White, the chaplain of an Anglican church in Baghdad, said the Iraqi military had warned him that his church had been threatened and offered heightened protection.

Associated Press writers around the world contributed to this report.