The explosive power of the tiki punch

An afternoon with retro drinks features 40-gallon bowls, grownups acting like kids, and lots and lots of fire 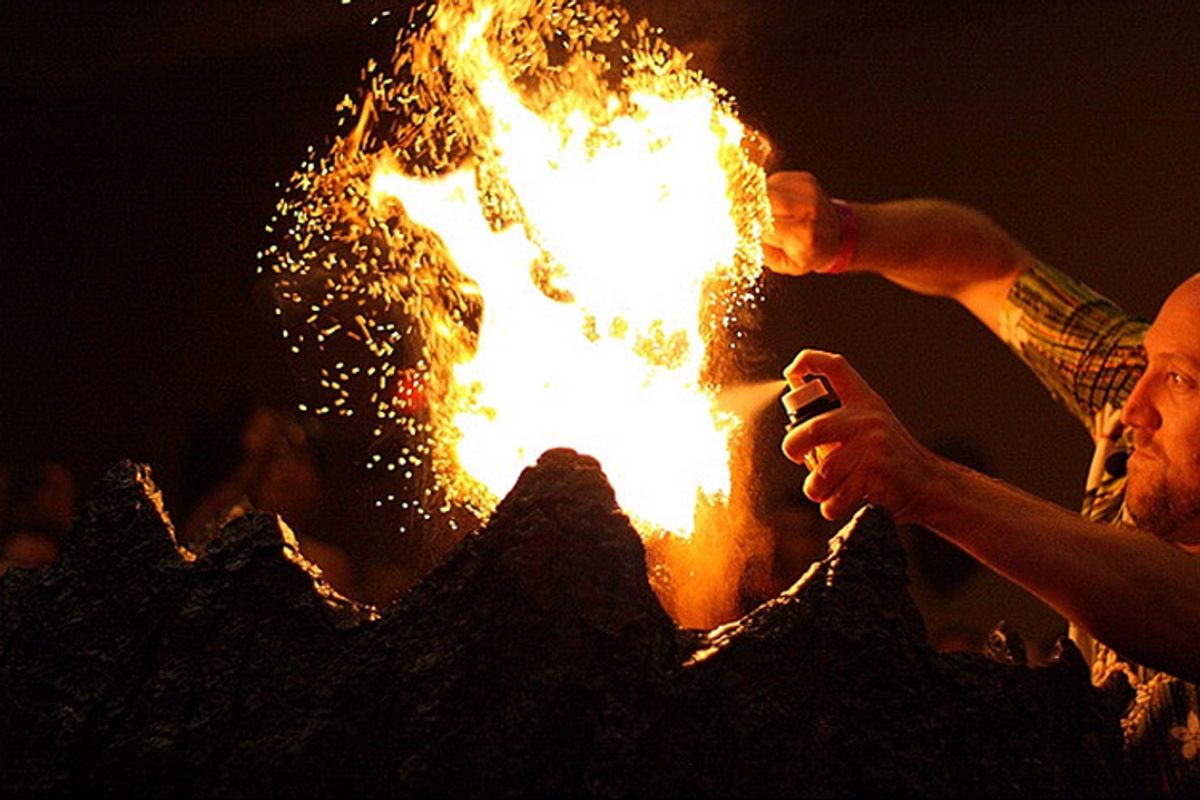 At the recent Tiki Oasis in San Diego, Cate presented The Persuasive Power of Punch, a thumbnail history of the origins of alcoholic punch. What's he know about punch? Plenty. As owner of the San Francisco rum bar Smuggler's Cove, Cate presides over a drinks menu that spans centuries, going back far earlier than the mid-century tiki drinks for which he is widely known. But from Planters' Punch to the Zombie, tiki has its share of potent multi-ingredient drinks that fall squarely in the punch tradition.

The room itself in the Crowne Plaza Hotel was divided into five main sections, all arranged in a rough circle around a tarp-covered central table. Now, tiki crowds skew slightly older, whiter, straighter and more coupled than I'm used to in drinkin' buddies, but a more friendly crowd you couldn't ask for. The room quickly filled with Hawaiian shirts, tropical dresses and a handful of fezzes. There were vintage cat's eye glasses, beehive hair, coconut purses and pineapple bracelets. And the attendees were positively gleeful.

The crowd filed in, grabbed cups of welcoming punch, and started heading for spots at the surrounding tables, each of which was outfitted with a small cup covered in plastic wrap. Each section's cups contained different liquids. As I tried to make out what they were, a volunteer pointed me to a seat. "If you sit where I tell you," she sighed, "this would all go a lot faster."

So I did. And Martin launched into his history of punch -- its origins in India and introduction to Europe through the British East India Company. He discussed how the very name punch is said to derive from the Hindustani word panch, meaning "five" (for the five ingredients common in 17th century punches), its place in pre-industrial England and America, and how its popularity declined over the years.

But those cat's eye glasses, those fezzes and those clusters of beehives kept turning back to the tarp in the center of the room. Fingers stealthily moved toward the cups, worrying loose edges of plastic wrap. Noses went into the cups as the audience tried to suss out their contents. Mine was clearly strong black tea. Cate, seemingly oblivious, began using a punch ladle as a pointer for his slides. It only made the audience more antsy.

He shared some tips for finding recipes and serving punches out of various vessels from bowls to coolers. "So ... anyway," he wrapped up, "that's it. Thanks for coming. I hope you guys had a good time." Scattered light applause began to ripple through the audience while shouts of "No, no!" arose in other parts. "What?" he asked. "Did I forget something?" After more teasing, he acknowledged there might be one more thing to do.

"I am here ..." Hands begin drumming the tables.

"To present to you ... " The drumming gets faster, harder, while yelps and cheers leap forth.

"The single most powerful weapon ever crafted ..." The cheers get even louder.

"Behold!" The tarp is drawn back in one dramatic reveal.

There, on the table, is an enormous volcano bowl fashioned from a Home Depot koi pond. Men and women -- with, one presumes, respectable day jobs -- are on their feet, snapping pictures, recording video, looks of delirious joy on their faces. Is this a talk about punches or a dustbowl tent revival? The glory and the power of rum has struck these poor souls, and I'll be damned if some of them aren't speaking in tongues. Hawaiian, if I'm not mistaken.

Cate asks each section to come forth and contribute its ingredient from the plastic cups. In goes cup after cup of fresh lime juice. "Come up here and feed it. Feeeeed it." The bowl's capacity is said to be 40 gallons. The sweetness of a rich Demerara sugar goes in. "Yes, yes, give it more … Excellent." Vanilla and cinnamon Trader Tiki syrups. After that, tea, tea and more tea. The crowd chants "Rum! Rum! Rum! Rum!" They get their wish: In goes a healthy dose of two rums. Our MC uses first a giant whisk, then an electric immersion blender to mix the ingredients. Red lights come on at the bottom of the bowl and the bubbler kicks in.

"This needs something," Cate notes. "Maybe it's fire."

And with that, this modern-day Barnum blew the roof off Tiki Oasis. Well, not literally. But the fire marshal might've gotten a little freaked as the audience screamed its approval. A large crouton, soaked in 160-proof lemon extract is set in place above the bubbling liquid, lit, and then blown into a huge fireball.

Almost in a frenzy, Cate passes around long straws, tells the crowd to put two together to make even longer straws. Some clatter to the floor in a maelstrom of tiki madness. From each section, a contingent springs forth to sample with double-long long straws. My photographer -- it's his first Tiki Oasis -- looks at me in amazement. "These are grown-ass adults," he marvels "acting like they're 21 years old."

And that's maybe part of the magic of Tiki Oasis and tiki crowds in general. Grown-ass adults sometimes need to act like kids. If that entails drinking and setting things on fire, then so be it. I had a blast (a contained one) and will be back next year.

• A big block of ice. Note that punch gets less watered down if all the mixed ingredients are chilled and served on a single block of ice.

• Trader Tiki syrups are fantastic vehicles for adding exotic spices and flavorings to tropical cocktails. Check them out here.

• Tiki Oasis, the annual San Diego tiki gathering. I'm already planning to hit up Tiki Oasis next year. If you go, get tickets early: they sell out fast

Matthew Rowley is the author of Moonshine!. He lives in Southern California and runs Rowley's Whiskey Forge.