The pastor and cheap, selective concern for "blood-spilling" 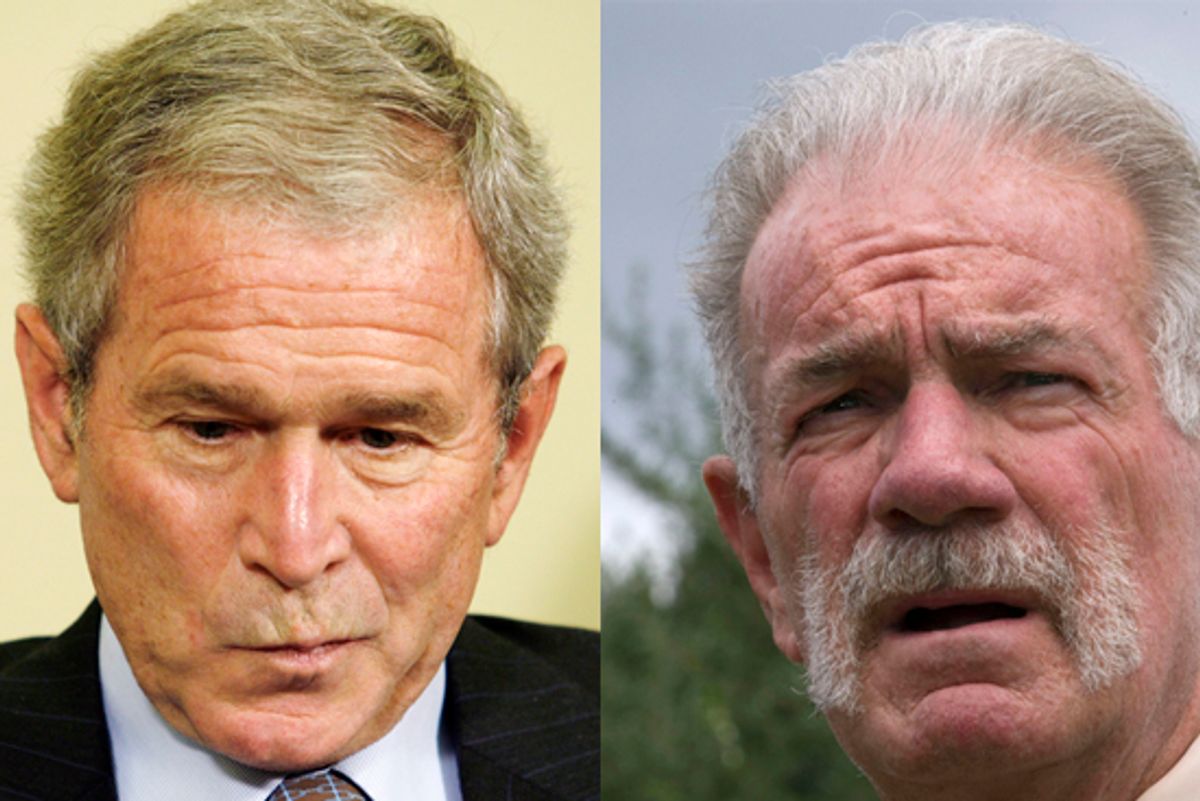 After WikiLeaks published the Afghanistan war logs, political and media figures fell all over themselves to publicly condemn the group for having "blood on its hands," despite the fact that (1) there is, as Wired noted just yesterday, "no evidence to date . . .  that anyone has suffered actual harm due to the documents" and (2) many of the people most vocally condemning WikiLeaks have enormous amounts of blood on their own hands from the endless wars, bombing campaigns, occupations, and detention regime they supported and still support.  But condemning WikiLeaks offers an opportunity for cheap, self-glorifying moralizing; the group has very little power or prestige in Washington and is thus an easy target for royal court journalists.  Media figures who treat actual blood-spillers with great reverence thus suddenly found within themselves oh-so-profound concern over "blood-spilling."  Along those lines, contrast the well-deserved contempt Tony Blair is facing as he tries to peddle his self-justifying book with the media red carpet rolled out for every pro-war Washington official and the treatment George Bush -- who spilled gigantic amounts of blood in Iraq and other places in the Muslim world -- will receive from the U.S. media when he releases his book.

The media circus surrounding the Koran-burning pastor illustrates this cowardly dynamic even more extremely.  Media figures who would never dream of treating with hostility Respected Political Officials who start wars of aggression are competing with one another over who can most flamboyantly express contempt for this inconsequential, powerless joke of a figure on the ground that he risks "spilling blood."  Just watch this 4-minute segment from Morning Joe this morning, one of the most cringe-inducing displays of cheap, cost-free self-righteousness you'll ever see, as a panel that includes Jon Meacham, Mika Brzezinski, and Dan Senor parade the Pastor in front of everyone -- without letting him speak -- so they can voice their profound contempt for him, while Meacham urges him, in the name of Jesus, to refrain from burning the Korans so as to avoid spilling blood:

Do you think that the establishment-serving, power-worshipping Jon Meacham would ever in a million years use language like that to condemn American officials who have actually spilled enormous amounts of blood?  An extensive search this morning revealed no instance where Meacham ever condemned or publicly appealed in the name of Jesus to the architects of the attack on Iraq, which resulted in the blood-spilling of hundreds of thousands of human beings.

In November, 2003, Meacham appeared on Fox News with Bill O'Reilly and said this of the leaders who were responsible for that blood-spilling aggression:  "Roosevelt and Churchill wrote the parts and first acted the parts that George Bush and Tony Blair are playing."  When the Iraq war began, Meacham interviewed George Bush 41 for Newsweek and asked him such probing questions as "How does it feel to be a president sending soldiers into harm's way?" and "Do you talk to your son about how to handle the pressures of war?"  And in 2009, Meacham joined the Washington consensus by demanding that Bush and Cheney be protected from prosecution for their torture and other war crimes, arguing:  "to pursue criminal charges against officials at the highest levels -- including the former president and the former vice president -- would set a terrible precedent."  That's the standard Washington media maven:  as subservient as possible to people with actual power, while showing tough-guy adversarial rage only against the inconsequential and the powerless, like this clownish Florida pastor.

Note, too, as part of that Morning Joe discussion, the ironic demand that the Muslim world recognize that the Koran-burners are only a tiny part of the American population and not representative of the country generally.  On Twitter yesterday, Marc Ambinder raised the same point, noting the inability of Americans to make clear to the Muslim world that the Pastor is not representative of Americans generally.  That inability is hardly surprising, given that (1) Muslims have encountered the same difficulty with getting Americans to see that Al Qaeda is not representative of Muslims generally (hence the polls showing high levels of anti-Muslim bigotry in the population and the widespread appeal of the anti-mosque movement), and (2) the countless American policies over the last decade that are perceived as a War on Muslims and thus a close cousin of the Koran burning.

On that last point -- the reason much of the Muslim world sees the Pastor's Koran burning as something other than an aberration in American political culture -- there is a truly superb Op-Ed in The Washington Post today by, of all people, Ted Koppel, who argues that the U.S. Government has done more to help Al Qaeda with our post-9/11 aggression than anything Al Qaeda could have done for itself:

The goal of any organized terrorist attack is to goad a vastly more powerful enemy into an excessive response. And over the past nine years, the United States has blundered into the 9/11 snare with one overreaction after another. . . .

While President Obama has, only recently, declared America's combat role in Iraq over, he glossed over the likelihood that tens of thousands of U.S. troops will have to remain there, possibly for several years to come, because Iraq lacks the military capability to protect itself against external (read: Iranian) aggression. . . .

As for the 100,000 U.S. troops in or headed for Afghanistan, many of them will be there for years to come, too -- not because of America's commitment to a functioning democracy there; even less because of what would happen to Afghan girls and women if the Taliban were to regain control. . . .

Again, this dilemma is partly of our own making. America's war on terrorism is widely perceived throughout Pakistan as a war on Islam. Perhaps bin Laden foresaw some of these outcomes when he launched his 9/11 operation from Taliban-secured bases in Afghanistan. Since nations targeted by terrorist groups routinely abandon some of their cherished principles, he may also have foreseen something along the lines of Abu Ghraib, "black sites," extraordinary rendition and even the prison at Guantanamo Bay.

But in these and many other developments, bin Laden needed our unwitting collaboration, and we have provided it -- more than $1 trillion spent on two wars, more than 5,000 of our troops killed, tens of thousands of Iraqis and Afghans dead. Our military so overstretched that one of the few growth industries in our battered economy is the firms that provide private contractors, for everything from interrogation to security to the gathering of intelligence.

We have raced to Afghanistan and Iraq, and more recently to Yemen and Somalia; we have created a swollen national security apparatus; and we are so absorbed in our own fury and so oblivious to our enemy's intentions that we inflate the building of an Islamic center in Lower Manhattan into a national debate and watch, helpless, while a minister in Florida outrages even our friends in the Islamic world by threatening to burn copies of the Koran.

If bin Laden did not foresee all this, then he quickly came to understand it. . . . Could bin Laden, in his wildest imaginings, have hoped to provoke greater chaos? It is past time to reflect on what our enemy sought, and still seeks, to accomplish -- and how we have accommodated him.

When the Jon Meachams and Mika Brzezinskis work up the courage to condemn the people who have done and are continuing to do this for the "blood they have on their hands," then their purported outrage and beliefs can be viewed as sincere.  But they don't do that and won't do that.  Righteous anger at those who spill blood is reserved only for hated foreigners (Osama bin Laden) and for the marginalized and powerless who haven't actually spilled any blood (the Koran-burning Pastor and WikiLeaks).  That's why this Pastor circus has received so much media attention:  it's a cheap, petty and easy way for people with enormous amounts of blood on their own hands to show what Good, Caring People they are by pretending that they hate those who cause it to be spilled.

On a related note:  I find the reflexive, intense condemnation of speech on the ground that it will "harm the troops" to be quite creepy and dangerous.  Obviously, the calls one heard in that above MSNBC video from Pat Buchanan and others for the "Commander-in-Chief" to forcibly prevent the Pastor's speech are pure authoritarianism, but even the reactions that fall short of that -- including the decision of the web hosting company to cease hosting the Church's website -- are quite disturbing.  This "endanger-the-Troops" theme has been used to justify everything from demonizing war opposition as vaguely Treasonous to re-writing FOIA to suppress torture photos.  We're frequently told that what our Troops fight for is our core freedoms, so demanding that those freedoms be curtailed in the name of the Troops -- either forcibly or through self-censorship -- makes little sense.  What actually endangers the Troops by spawning anti-American hatred is what Ted Koppel described:  sending them to invade other countries, dropping bombs on civilians with robots from the sky, imprisoning the invaded populations without due process and torturing them, etc. etc.  Those who claim to be so concerned by the welfare of Our Troops would be well advised to oppose those policies rather than demanding that American citizens refrain from expressing their views on U.S. soil.  Burning Korans is a repellent thing to do because of how bigoted and hateful it is, not because it harms our war efforts.

On an unrelated note: The Washington Times' Eli Lake has a very good article today on the way in which Obama has replicated Bush's War on Terror policies, including many which Obama explicitly condemned when running for President.  That, of course, is nothing new to readers here, but what is notable is the praise heaped on Obama by Bush's former NSA and CIA chief, Gen. Michael Hayden, one of the hardest-core advocates of radical executive power, on the ground that "there is more continuity than divergence between the Bush and Obama administrations' approaches to the war on terror."  I interviewed Sen. Russ Feingold early this morning, to be posted next week as part of a money bomb in support of his important re-election campaign, in which he elaborated quite extensively and eloquently on the continuation under Obama of many of the most controversial Bush policies.

UPDATE:  A month before the 2004 presidential election, Meacham appeared on CBS' Early Show to discuss the final report from David Kay proving that Saddam had no WMD before we invaded, and here is what he said:

The President is convinced that Iraq was, as he put it, a grave and gathering threat, and that's not an unreasonable proposition. . . . Let's remember, [Saddam] sent mixed signals about his own WMD to his own people.  .  . . He was not saying, "I don't have anything at all " -- we now know he didn't -- but he was not exactly helping his own cause. . . . Whether you like it or not, the War on Terror is a war.

He then went on to praise Dick Cheney's argument as "very effective" that Democrats -- unlike the GOP -- would be unable to confront "state sponsors of terrorism."  Noticeably absent was any condemnation from Meacham of Bush and Cheney for spilling huge amounts of innocent blood in violation of the mandates from Jesus.  Like most establishment journalists, his moral outrage is reserved exclusively for those who have no power in the royal court he serves.  Blood-spilling by American officials is always legitimate and reasonable, by definition.