The trouble with being Jerry Brown 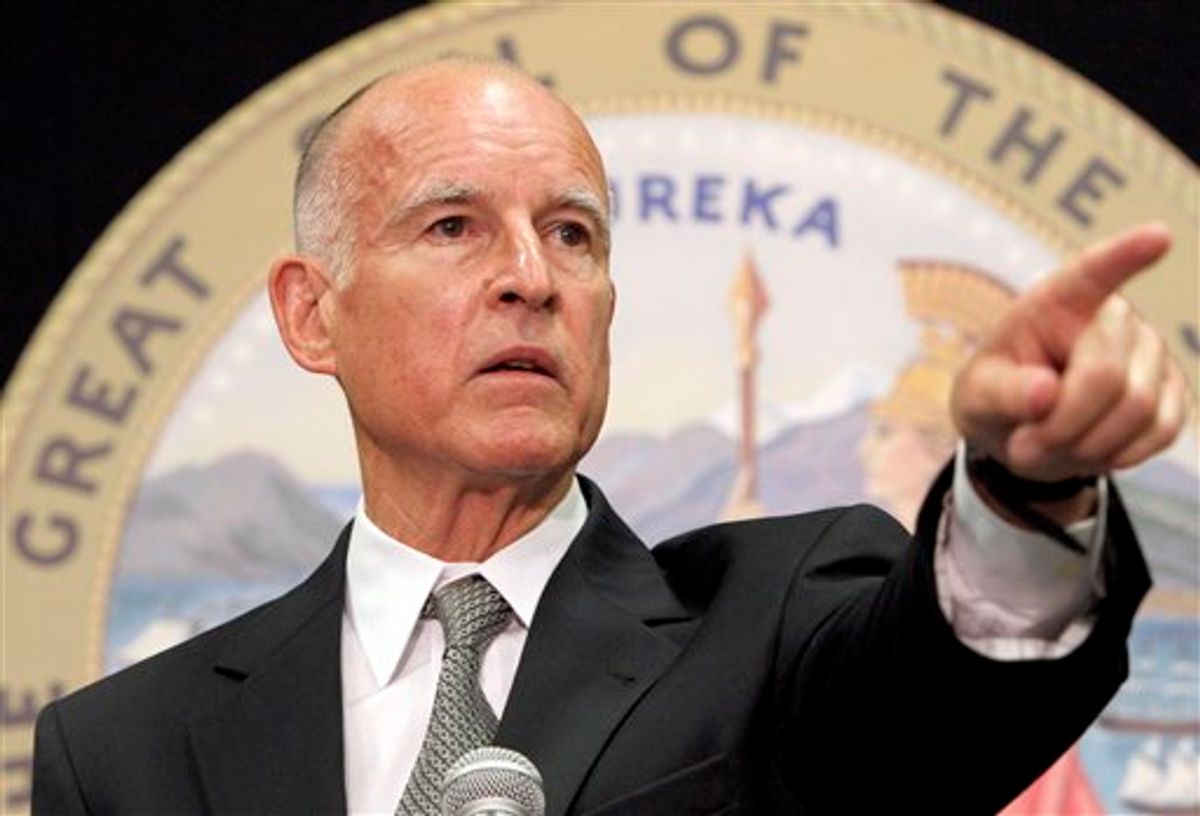 California's Attorney General Jerry Brown speaks during a news conference in Los Angeles on Monday, July 26,2010. Brown, said Monday he has subpoenaed hundreds of records from the Los Angeles suburb under investigation for sky-high salaries paid to its leaders, and demanded to see employment contracts from the city of Bell within 48 hours to determine whether to file charges. (AP Photo/Nick Ut) (AP)
--

It's hard not to pull for Jerry Brown, if only because he's such an American original,  a free spirit with an active mind and ever-shifting ideology who has spent 40 years finding new and inventive ways to keep himself relevant.

To me, the moment that best sums him up came during his 1992 presidential campaign, when he made a speech in Hoboken, N.J., just days before the critical New York primary. "This," Brown told the crowd with the Manhattan skyline behind him, "is the Empire State."

"Garden State!" the crowd shouted back.

"I meant metaphysically," he replied.

Whatever you think of his politics, it's fun to have Jerry Brown in the game. But he's in some serious trouble now, just two months before the finish line in what could be his final campaign, a comeback bid for governor of California.

Polls all year have shown a close race between Brown and Republican Meg Whitman, but this week vividly illustrated two unique obstacles that Brown, who last held the governorship 27 years ago, is facing. It started on Monday, when Brown, who is cash-strapped compared to the free-spending Whitman, launched his first television commercial of the fall campaign, a fairly generic 30-second spot aimed at reframing his political longevity as an asset:

The ad was technically solid and, under normal circumstances, might make for a good start to a successful fall television campaign. But almost instantly, the Whitman campaign, which has been saturating the state's pricey airwaves with ads all year, churned out a rather devastating response ad that featured a cameo from Bill Clinton:

1) Money: He scrimped and saved all spring and summer so that he could afford a meaningful television campaign in the fall. But as soon as he rolled out his first ad, his opponent -- a former eBay executive who has already spent at least $104 million on her campaign, and who will spend tens of millions more without blinking -- stole his thunder. You can expect this pattern to repeat throughout the fall, with every Brown ad being met with a swift and negative response that reminds Californians of everything that ever bothered them about "Governor Moonbeam."

2) The Clinton factor: It's been almost 20 years since Brown and Clinton competed for the '92 nomination. But the ugliness of their contest lives on thanks to video -- and the footage doesn't look that old. So Whitman's team was able to recycle one of Clinton's damning put-downs of Brown from a '92 debate, from an exchange in which he portrayed Brown's gubernatorial record in the exact same negative light that Whitman is now trying to portray it, in effect enlisting the former president as a surrogate. From Whitman's standpoint, it certainly doesn't hurt that Clinton is now enjoying something of a P.R. renaissance. And it doesn't help Brown that Clinton has a long memory. The two men never made up after the '92 campaign -- thanks largely to Brown's refusal to drop his campaign even after Clinton had gained an insurmountable delegate lead. Brown wouldn't even back down at the '92 Democratic convention. When Clinton refused to offer him a speaking slot (because Brown had refused to endorse him), Brown had himself nominated from the floor and delivered a 20-minute speech that didn't even mention the party's soon-to-be nominee. So it's doubtful that Clinton will speak up for Brown now and defuse the Whitman team's attacks.

The most recent poll puts Whitman ahead by 2 points, 48 to 46 percent. But her money, the Clinton factor and the national climate all could give her a critical advantage in the stretch run. To be sure, Brown can still win. California remains a deeply Democratic state and the possibility of a backlash against Whitman's spending exists. But it's probably safe to call him the underdog.