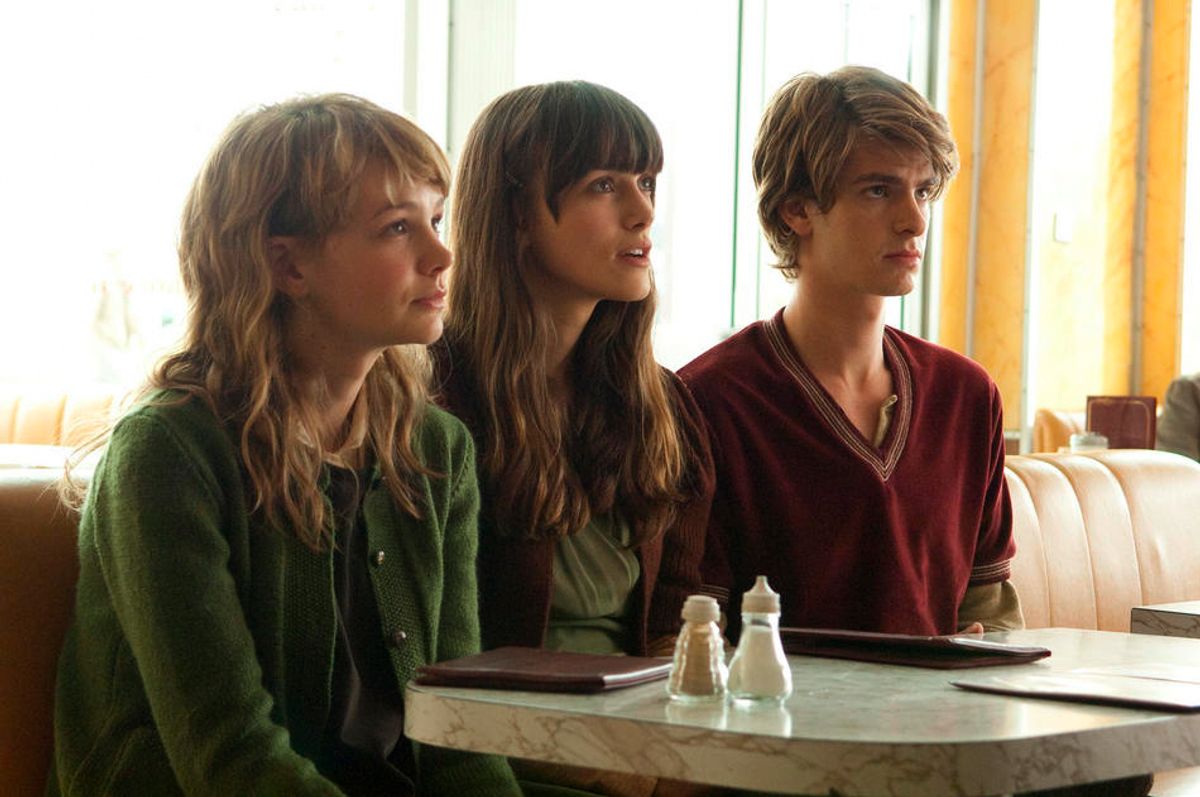 I've never been to this city or its ginormous but famously friendly film festival before. Indeed, for a person who claims to be worldly, I've spent very little time in Canada and probably hold the most hackneyed kinds of Yank stereotypes about the place. I'm not likely to know Toronto very well after this week either, but I'll sure become acquainted with the insides of its movie theaters, even while taking in a tiny percentage of the 300 or so films on display here. I spent an hour or so today strolling through the diverse and charming street life of Queen West, just north of downtown Toronto, and encountered that distinctive quality of Canadianness, which sometimes feels American and sometimes feels English but ultimately isn't quite either.

That feeling of slight, odd displacement was the perfect preparation for my first film of this year's Toronto International Film Festival. That was "Never Let Me Go," the meticulous and devastating adaptation of Kazuo Ishiguro's dystopian novel that was screened for the press here on Thursday evening. You could describe "Never Let Me Go" as set in an alternate-history version of postwar Britain, but as with all really good alternate histories, the changed universe really isn't the point. Director Mark Romanek captures the slightly seedy and rundown reality of '70s and '80s British life in astonishing and even tragic detail; this is more like a period piece than a science-fiction movie. In fact, it resembles a Merchant-Ivory tragedy about doomed love in a war zone, except that the doomed love involves human guinea pigs and the war zone is not some tropic zone but the alleged good intentions of medical science.

There's no way to write about "Never Let Me Go" without at least dropping hints about the ultimate destiny of Kathy (Carey Mulligan), Tommy (Andrew Garfield) and Ruth (Keira Knightley), the romantic triangle who meet as children in a dreary, peculiar boarding school called Hailsham House. If you don't want to know any more about that, stop reading now. This is really never a secret in the film, although it's concealed at first under a mask of horrifying euphemism -- as an adult, Kathy becomes a "carer," who works with "donors" until they reach "completion" -- and I had read Ishiguro's unforgettable novel and knew what was coming. Still, there's a scene about 20 minutes into the movie when a sympathetic teacher named Miss Lucy (Sally Hawkins) finally spells out what the Hailsham children need to know about their future if they're to have "decent lives," as she puts it, and Romanek dramatizes this hammer-blow, life-changing moment with such power that I don't want to undermine it.

Screenwriter Alex Garland, who is himself a novelist, sticks close to both the letter and spirit of Ishiguro's novel; this movie is a veritable clinic in precise literary adaptation. He incorporates snatches of dialogue and even voiceover (read by Mulligan) straight from the book, without swamping the human drama or overwhelming Romanek's astonishing visual evocation of a bygone Britain. His innovations are limited, but they help set the stage in important ways: The big medical breakthrough came in 1952, we are told in an opening title, and by 1967 life expectancy exceeded 100 years. This came at a price, of course, and "Never Let Me Go" asks us to consider that price in all its dimensions.

Kathy H., played by Mulligan as an adult and Isobel Meikle-Small as a child, has no last name. Neither do the other girls and boys at Hailsham (and it turns out, at other and even more dismal places). They won't be needing them. Kathy is a tender, slightly dowdy girl with an off-kilter haircut and a yearning expression who develops a fatal early crush on Tommy (Charlie Rowe, as a child), a hot-tempered outcast who is tormented by other boys. Kathy's best friend, Ruth (Ella Purnell, as a child), a popular and elegant girl, mocks Tommy at first -- until she corners him, kisses him and claims him as her own.

It's an act of ordinary schoolgirl predation, one that could happen anywhere at any time. But it carries more weight in the isolated hothouse atmosphere of Hailsham, where the kids rarely encounter outsiders and sit around play-acting at ordering tea in a restaurant -- something they may or may not ever get to do. Or at least it seems to carry more weight. One of the questions Kathy asks herself as she, Ruth and Tommy grow apart and then reunite, very near the end of their journey, is whether their artificially foreshortened lives are really much different than anyone else's.

Romanek does so many difficult things beautifully in this movie, which richly deserves the Oscar consideration it will surely receive. He handles a literary adaptation, he re-creates a lost world that is partly imagined but mostly real, he manages a group of characters from childhood through adulthood, and he gets haunting, underplayed performances from both Mulligan -- the real star of this film -- and the oft-maligned Keira Knightley, strong and subtle as the greedy, petty and finally penitent Ruth. (Garfield is also good, but his role is less substantial.) But maybe the best and most difficult of them is capturing the philosophical dimension of "Never Let Me Go," which is difficult to describe with words, let alone pictures.

It's a truism to say that speculative fiction is always about our world rather than an imaginary world, but it's certainly true in this case. The specific reality imagined by Ishiguro -- a caste system in which some human beings are sacrificed so that others may live -- may seem far-fetched. It will strike nearly everyone as morally reprehensible, and even the most hard-hearted science geek would not defend it. But things as bad as that have happened before and will quite likely happen again, and in any case this movie isn't a lecture about the horrors of human history. It's more like an allegorical reminder that we all live and die amid confusion and injustice, and that life seems too short no matter how long it lasts, and that the days we have are miraculous and then they are gone.