Copilots are not potted plants 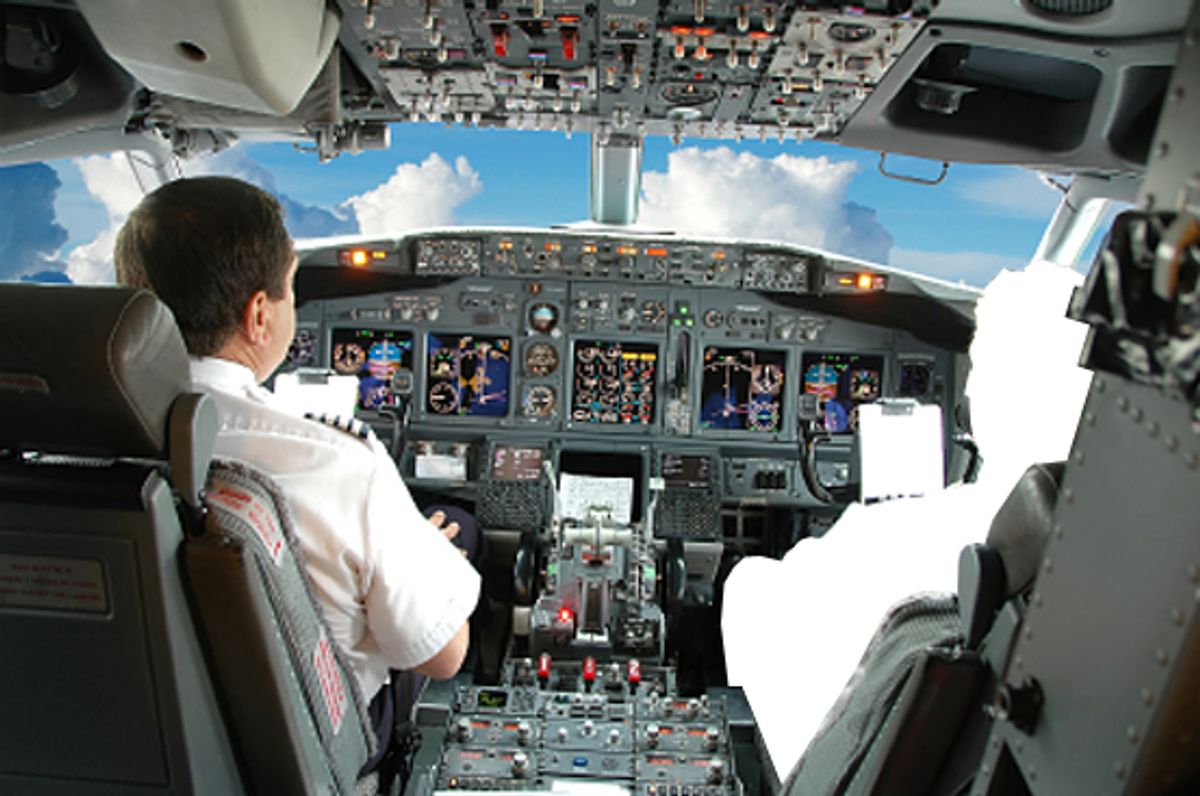 Pilots in the cockpit during a commercial flight (Carlos E. Santa Maria)
--

Ryanair's Michael O'Leary and his crackpot idea of eliminating one of the two pilots from his airline's cockpits is still getting play.

CNBC had a guy on the other day -- a pilot and head of an aviation franchise in California -- to help explain why this is such a far-fetched, if not dangerous idea. I won't say the guy's name, because at least he was trying to set the record straight. In the end, though, he wasn't strong enough, waffling when he should have gone for the jugular. The viewer came away wondering if perhaps O'Leary has a point, and maybe pilots are becoming redundant.

This fellow, mind you, was identified on-screen as being a licensed "Airline Transport Pilot." To the layperson that sounds like serious cred. Indeed he may well be a highly talented aviator, but I should point out, for the record, that it is possible to possess an ATP certificate, as we call it, having never piloted anything more significant than a twin-engined four-seater.

That's the FAA for you, with its strange and anachronistic licensing system. I should know, I was a licensed airline transport pilot myself at age 23, and the biggest thing I'd ever flown was a Piper Seminole. Having this certificate allows a pilot to check off certain regulatory boxes, but it does not, by itself, mean that you know the damnedest thing about actual airline flying.

Our CNBC man made some remark about first officers being on hand to "check up on what the captain was doing" (I'm paraphrasing, but it was something almost identical to that), at which point I felt a trigger of my gag reflex. Here he's fighting one myth by inadvertently reinforcing another: the idea that the first officer, i.e. the copilot, is somehow not a fully qualified pilot -- that he or she is on hand merely as a helpful apprentice, a junior pilot still learning the ropes. This is almost as annoying as some idiot telling us how jetliners can "practically fly themselves."

Both captains and first officers are fully and equally qualified to operate the plane in all regimes of flight, and they do so in alternating turns. One pilot "flies," be it manually or by making inputs to the autoflight system, while the other handles the various ancillary duties. Either or both can become very busy, depending on circumstances and the phase of flight.

Copilots perform just as many takeoffs as captains, and just as many landings. They are at the controls in good weather and bad. The captain has ultimate authority (and a fatter paycheck), but duties are shared more or less evenly. Due to quirks in seniority bidding, it's not uncommon for a copilot to be more experienced than the captain sitting next to him. And if not for the number of epaulet stripes and seating protocols (captain on the left wearing four; first officer on the right wearing three), a lay observer in a cockpit jump seat would be hard pressed to figure out which of the pilots was in fact the boss.

As I was saying the other day, you'd be startled to discover how busy a two-pilot "automated" cockpit can become even on a routine flight. Pilots, when they get defensive, have a bad habit of highlighting their (obvious) value in emergencies and other abnormal situations. The splashdown of Captain Sully, for instance.

But this doesn't always play well to the public, which is apt to point out how rare these occurrences are. I can't downplay the value of a well-trained crew when it all hits the fan, but how about in normal circumstances? Never mind the emergencies. Crews are busy enough when things are going right.

I've written before about how one big problem with all of this is the media's habit of turning to academics and researchers and the like for its expertise, rather than people who are actually intimate with the day-to-day operations of airline flying. The next time you hear NPR or CNN or whomever interviewing this or that aeronautics professor, have a grain of salt ready.

Among the more notorious of these quasi-experts, you might remember from earlier columns of mine, is Missy Cummings, a professor from MIT. Cargo airlines, Cummings told us a few months ago, are "chomping at the bit" to do away entirely with their pilots and replace them with remote-control freighter planes. I flew freighters for four years, and I assure you these companies are not remotely considering such an idea.

Virtually every commercial aircraft with more than about 10 seats is engineered to be flown by a crew of two. Training protocols and regulations all follow suit. This is not some minor thing that somebody like O'Leary can tweak to his preference.

Forty or so years ago manufacturers began designing planes to be flown by two pilots rather than three, doing away with the second officer, aka the flight engineer. This was a fairly radical undertaking, and the idea of downsizing further, from two pilots to one, is considerably more radical. Embraer, the Brazilian regional jet maker, is one company that is seriously looking into the idea. Still, it'd be a huge step, and not anything we're likely to see in scheduled commercial service at least for many years. Getting to this point would entail not only a purpose-built aircraft, but large-scale regulatory changes as well.

And why would anyone, with the possible deranged exception of a Michael O'Leary, want such a thing? Should that lone pilot somehow become incapacitated, believe me that plane is not going to land on its own, and nobody from the passenger cabin is going to save the day.

From one pilot to none? Check back with me around the end of the century.

But forget, for a minute, replacing pilots with computers. Here's a better idea, (as suggested by Ask the Pilot reader Patrick Wright): Let's replace airline CEOs with computers. Judging from the financial performance of most carriers in recent years, something is wrong at the top, so why not go with an automated system instead?

No doubt Michael O'Leary would be quick to accuse me of not knowing the first thing about running an airline, and lay out the hundreds of reasons why computerized leadership would doom a carrier to failure.

And you know what? He'd be right. My idea is as bogus as his. So how about we call it even? I won't pretend that I know how to run an airline if he stops pretending that he knows how to fly.