As a mom, I've been honest about everything from divorce to sex. But one topic makes me stumble: Terrorism 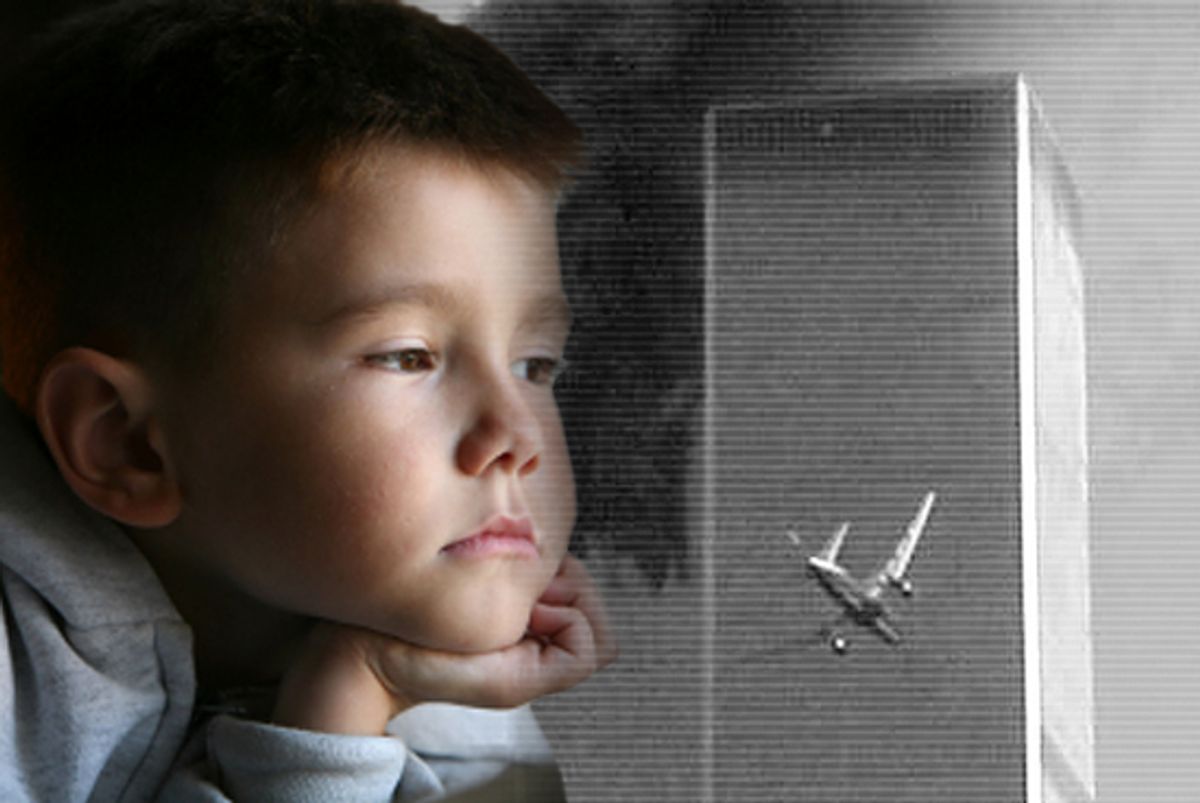 At 7, my son loves to read. One day earlier this year, he was flipping through the pages of a children's encyclopedia from the 1990s. He stopped at a glossy photo of the New York skyline that included two enormous buildings he'd never seen. His voice piped up from the car seat behind me: "Mom, you've got to see these two buildings. They're huge!"

I didn't have to look. I hesitated, looking for the right combination of facts and guidance. "They used to be downtown," I said slowly. I had no idea where to go next.

He waited for more, but got nothing. Finally: "Mom, why aren't those two towers there anymore?"

Awkward silence filled the car. "Wait," he said. "What?"

My response, just two words, made me ashamed of myself.

Seven years into motherhood, I thought the hardest questions were behind me. My son knows I was married to someone else before I met his dad. He knows that his elderly and fragile grandparents may not live too many more years. He knows there is no Santa Claus and likes being in on the joke. And our conversation about how babies are made wasn't awkward -- because he's not old enough to realize it could be.

It's the one piece of parenting I was sure I had down: My kid asks me something and, no matter how difficult the subject, I answer on the spot with honesty leavened by tact.

Or, at least, I thought I did.

"It's complicated." That was the best I could do? We pulled into the supermarket parking lot in our Pittsburgh suburb, and I told him we were running late and needed to hurry. Neither of us said anything for the next few minutes. So much for being the mom who tackles the tough stuff.

In 2001, parents around the country were faced with explaining the events of 9/11 to children in real time, when the pain was fresh and images of destruction were everywhere. But for those of us who didn't become parents until years later, when the attacks were already our history rather than our present, it's been a different challenge.

In New York City and its suburbs, many schools observe the anniversary. Some neighborhoods have public memorials honoring residents who died and local news coverage often features the ongoing story of Ground Zero. Families throughout the region lost loved ones, so for kids in many households the subject isn't so much revealed as it is explained gradually.

A friend I grew up with on Long Island, who is now raising her own kids there, introduced the subject in stages. "Kaitlyn was only 3 months old when it happened, so I told her about it when she was 4," says Andrea Cappelli Redican. "She asked about it since it was on the news, and I told her that some ‘bullies' from another country didn't like us and tried to start a fight. She was only 4, so I tried to lessen the blow. Now she knows the whole truth, about the terrorists, training and the rest."

I asked a friend in Massachusetts, Michael Bird, whether he'd discussed it with his 7-year-old daughter. "Not yet," he wrote to me. "It's not that we've been deliberately avoiding it – it just hasn't come up. I plan to be honest when the time comes, but who knows what the circumstances will be that start the conversation?"

In the Pittsburgh area, some schools commemorate the day but others don't mention the subject at all. Some wait to introduce it until well into middle school. My son started second grade last week, and his teacher doesn't plan to make any reference to the anniversary.

As Mary Kay Delaney, chair of the education department at Meredith College in Raleigh, N.C., explains, "So many parents handle this differently from each other. The teacher's job is to respect the role of the parents … but also to make a safe place for children to ask questions and speak. So when you're talking about introducing this into a class, you have to think about respecting lots of family boundaries."

Delaney continues, "I think the role of a teacher with her elementary students can be to communicate with parents that this is coming up and 'we're going to talk about it in the classroom in this way, and I wanted to let you have a chance to talk about it with your child.'"

I hadn't planned in advance to keep this from my son. I am a New Yorker by birth, and the events of that day changed the trajectory of my life, as they did for so many people. If anything, I figured someday I'd introduce it in detail.

But my policy of answering his questions as soon as they crop up is not just about giving him facts. It's about context as well. I explain what complicated things mean and how they might impact him. I can do that with thorny subjects like sex, death or racism because I have a clear sense of what I know and believe. Sept. 11 is something I'm still grappling with. That makes it much more of a challenge – and more intimidating – to translate it for someone so young. Knowledge, my father-in-law has always said, can make a bloody entrance.

I had no idea how to tell a first-grader that a handful of men doomed two colossal buildings in an instant, killing thousands of people using ordinary airplanes, and I can't say for sure what that means for our future. So I said nothing.

The subject didn't come up again for a month. Then, one night before bed, he asked why it said "In Memory of 9/11/01" on the New York Fire Department sweatshirt I was wearing. I was uncomfortable, and I probably sounded grumpy when I responded. "Have you packed your bag for school tomorrow?"

He stared at me, then went hunting for his backpack. Again, I had copped out.

We like to think that the choices we make give us some measure of control in raising healthy, resilient children. But as with protecting ourselves from terrorism, control can be pretty much an illusion. In the end, we know almost nothing about how events and information will germinate inside our kids.

On one of my son's last days of school in June, I was ready when he got off the bus. As he walked up the driveway, I was trying hard not to be awkward or nervous. Which meant, of course, that I was completely awkward and nervous.

I was equipped with visual aids -- images and news reports I'd curated to tell the story honestly but in a way that was manageable to a first-grader. Pictures of the towers with smoke coming out the top, but no falling bodies. Pictures of firefighters, but none of the airplanes hitting.

I told him about the men and the planes. And I told him that after nearly nine years, nothing like this has happened again.

"How can a plane blow up a building?" he asked. I started explaining that jet fuel can explode and create a fireball. His eyes were huge. Great, I thought, now he's probably terrified that the gas station will blow up the next time we fill my tank. I started talking about the heroic firefighters, including one who was an old friend of mine.

Despite my faltering when it first came up, I still know this much: I don't want to become a parent who shuts out reality. My house will never be a cocoon where the flow of information and inquiry is stifled. And I think it's logistically impossible to censor things the way parents could back in the pre-digital world.

Sept. 11 is the granddaddy of disturbing news events. But leaving something this world-changing for others to explain seems to me as ill-advised as dodging the subject of sex and assuming kids will learn what they need to know from TV and their friends.

And so, as I finally sat down with my son, I steeled myself to give clear explanations to questions that, even today, seem unanswerable.

Our conversation lasted only a couple minutes. Then my first-grader looked up at me. "Can I have a snack?" Cereal bar in hand, he walked down the hall to watch "Arthur" on PBS. I sat at the kitchen table alone, wondering whether I'd screwed up and realizing I wouldn't know for years, if ever.

Later, as he got ready for bed, he said quietly, "I'm sorry for your friends who died."

And there it was: the payoff. I had told a 7-year-old about people who hated, and who killed because they hated. I had told him that the world changed, and that many people had died. Knowledge doesn't always make a bloody entrance. What I got back that day, in a small voice spoken in a little boy's bedroom in a middle American suburb, was compassion.

Melissa Rayworth, a writer based in Pittsburgh, lived in China from 2001 to 2004.